Buy Money Monster cheaply from Amazon. You too can earn money from writing articles by signing up for InfoBarrel.
InfoBarrel is a writing platform for non-fiction, reference-based, informative content. Opinions expressed by InfoBarrel writers are their own.
InfoBarrel > Entertainment > Film > Movies

Certificate 15, 98 minutesDirector: Jodie FosterStars: George Clooney, Julia Roberts, Jack O'ConnellIn Money Monster, Lee Gates (George Clooney, Gravity, The Monuments Men), is the host of a popular financial programme showing on the (fictional) network FNN, also called Money Mon$ter (but with the addition of a dollar sign). The show is a bit tacky, high on razzamatazz and effects, with dancing girls, buzzers, musical numbers and comedic clips used to illustrate events, and would seem to go out live every weekday, but Lee doesn't seem like the easiest person to work with - which he would probably admit himself.It begins with Lee talking, over the opening credits with some scenes from the past, before the show itself starts, about a company called IBIS Clear Capital, and how it recently lost $800 million due to what the CEO, Walt Camby (Dominic West, John Carter), calls a "glitch." The company - and it's never clear exactly what it does; presumably it just makes money from buying and selling - uses an algorithm to place thousands of trades on the markets, buying and selling multiple times and making a little every time. The algorithm apparently went wrong, and the company lost a lot of money, causing a collapse in its share price. Lee had been promoting the stock, and still is, saying that it is going to stage a comeback, as before IBIS went public it had been profitable and even afterwards it still was - mostly.

Credit: https://en.wikipedia.org/wiki/File:Money_Monster_poster.pngBack in the studio, Lee and his director, Patty Fenn (Julia Roberts, Larry Crowne, Mirror, Mirror) - who is doing her last show, although she hasn't told Lee that - and the rest of the team are getting ready for the next live show. Lee was going to be interviewing Walt Camby about ISIS live in the studio, but that has been changed. Camby had gone to Geneva, and is now on a plane flying back, and no-one can get in contact with him. So the Chief Communications Officer of IBIS, Diane Lester (Caitriona Balfe, Escape Plan), is going to be filling in instead, from another location.Shortly after the show starts, a deliveryman carrying two boxes is seen wandering onto the rear of the set, and Patty's attention focuses on him. The crew believe that he's just wandered into the wrong place - until he pulls a gun out and fires it into the ceiling, and panic ensues. The director takes the programme off the air, but the man, Kyle Budwell (Jack O'Connell), holds the gun to Lee's head and says that he will shoot him unless the feed goes back out. So Patty restores it, and the hostage situation starts going out live.The gun is bad enough, but what's in the boxes are worse. Kyle gets Lee to open one and pull out a bomb vest and then put it on. There's a substantial amount of explosives in the vest, enough to take out a goodly chunk of the building, and Kyle has a deadman's switch, so if he is taken out, the bomb will go off. With the threat of the bomb, Patty gets all the non-essential crew to leave, both on the set and in the booth, to leave as quickly as they can. Down on the street, the police, commanded by Captain Powell (Giancarlo Esposito, Maze Runner: The Scorch Trials), and the Emergency Services Unit of the NYPD have also arrived, and quickly evacuate the rest of the building.What Kyle wants is to confront Lee, for recommending IBIS, and Camby, the company's CEO, about the resent loss. He has lost $60,000 on the stock, all of his money, and just wants some answers. So he's decided that the only way to do this is to threaten a TV host live on television. Unfortunately, Camby isn't there - and not even his own company is really sure where he's got to. Kyle had realised before he went in that he's not going to get out of the situation in one piece, but just wants some answers before he does, and just wants a genuine explanation before it's over, as he isn't happy with the claim of a "glitch."With the immediate situation starting to calm down, Patty starts acting like the director of a programme, and gets Lee to act like the host again. She directs a cameraman to get a better shot of Kyle - which kind of confuses him, not surprisingly, but after the situation is explained he complies - and then gets him wired for sound so that he can be heard better. Lee promises to start looking into what happened with IBIS, and just how it managed to lose $800 million in a single afternoon. As the world watches, and the NYPD plans an assault, the show's team start chasing round, trying to get interviews with IBIS staff and speak to other relevant people, and Diane Lester from IBIS herself tries to speak to the "quant" or quantitative analyst[1] who programmed the software that had the "glitch" that caused this situation. Lee himself starts to empathise with Kyle, and genuinely tries to help him find out just what happened.There are, as the hostage situation goes out, shots from people in Iceland, South Africa and South Korea, all of whom have the show on, and which might seem an eclectic range of locations, but these locations all have relevance to the actual plot. It's interesting how many of the people who are at risk from the bomb if it goes off just start doing their job once the initial panic is over, researching IBIS and making sure the show goes out properly, with good shots of Kyle.The certification is unusually high, as there isn't really anywhere near as much violence as is often seen in 15 certificate films, and certainly no bloody violence. There's the constant threat of violence, and certainly a lot of swearing - only to be expected, in the situation - but overall Money Monster is at the bottom end of the certification and probably isn't that much worse than some 12As.The story is quite compelling to watch and, even though it's now a few years since the Credit Crunch, quite timely in its appeal, in that people want to know just how all their money was lost by some of the smartest people on the planet, and why. There's always a suspicion that events weren't as aboveboard as they seemed to be. It is a bit strange seeing a film on the topic of money lost by giant companies being made by what is itself a giant company (Sony). As the film progresses, you start, as Lee and, probably, Patty do, to empathise yourself with Kyle's situation. Sure, perhaps you wouldn't choose this as a viable method of trying to find out what happened, but Kyle's motivations, if not necessarily his actions, are quite comprehensible. A lot of the film is based out of the studio, and the interactions between Patty and Lee (over his earpiece) and Lee and Kyle are the most important, and they play their roles well. Money Monster is a good thriller, and one that is supposed to make you think, especially if you pay attention to what happens after the situation is resolved. 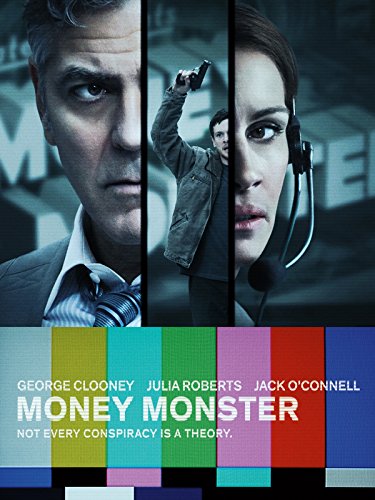