Watch Nightcrawler cheaply on Amazon. You too can earn money from writing articles by signing up for InfoBarrel.
InfoBarrel is a writing platform for non-fiction, reference-based, informative content. Opinions expressed by InfoBarrel writers are their own.
InfoBarrel > Entertainment > Film > Movies

Certificate 15, 117 minutesDirector: Dan GilroyStars: Jake Gyllenhaal, Rene Russo, Bill PaxtonIn Nightcrawler, Louis Bloom (Jake Gyllenhaal, End of Watch, Prisoners) is an unemployed man living in Los Angeles. He drives an old car and lives in a tiny apartment, stealing metal to sell, although he is looking for a job, being willing to try anything simply to work, even if it's initially unpaid. He seems to have no social life and no friends, and his only companion is a plant.One night he sees emergency vehicles heading towards the scene of a car accident, and when he passes the scene he pulls over. An independent two man camera team, led by Joe Loder (Bill Paxton, 2 Guns, Edge of Tomorrow), arrives at the scene and starts filming, getting in everyone's way. Curious, Bloom asks some questions of Loder, and takes inspiration from this, especially after watching it on television - said channel being one he is stealing. He buys a cheap camcorder and a police scanner and starts heading out to various crime and accident scenes, trying to films some footage.

Credit: http://en.wikipedia.org/wiki/Nightcrawler_%28film%29#mediaviewer/File:Nightcrawlerfilm.jpgFinally, Bloom gets some up close shots of a dying carjacking victim. The news director of the vampire shift of KWLA 6, Nina Romina (Rene Russo, The Intern), buys the footage from him and tells Bloom what she is looking for - graphic violence, accidents, disasters, of well off people in well off neighbourhoods. Romina is not so concerned about the ethics of what they might show as she is about getting people to watch it. As Loder told Bloom earlier - "If it bleeds, it leads." Flush with this initial success, Bloom hires an assistant, Rick (Riz Ahmed, Jason Bourne), although hires is a bit of a misnomer, as Bloom tries to pay him as little as possible, whilst padding out what his company is and what it is going to achieve. One thing Louis doesn't lack is self confidence.Bloom quickly gets the idea of, if possible, altering the scenes to make them look better for his filming. Initially, this is simply rearranging some pictures; later it gets worse. He becomes more successful, upgrading his camera and equipment, and buying a new, flashy car, although he keeps the same apartment. Things start coming to a head when Bloom arrives at the scene of a home invasion before the police, and actually films the attackers - something he doesn't divulge to the police, even though they suspect this. Instead, he uses that knowledge to get more footage.Louis Bloom is an individual who seems intelligent and who has picked up a lot of knowledge online, most of which he seems to remember. Sometimes it appears that he is parroting what he has learned back, without necessarily understanding some of it, especially when it comes to people. His internet research also sometimes goes to a level that borders on creepy. He is polite and well spoken, but also appears to be a complete sociopath with a lack of empathy for others, as well being narcissistic. Bloom also has a dangerous side, which is revealed right at the beginning, and he is willing to do what it takes to get a better shot.Bloom is an interesting, if not terribly likeable (even though he often comes across initially as likeable, when things don't go his way his true personality starts to show), character, who Gyllenhaal plays well. You are left wondering just how far he is willing to go to get that better shot. Louis is willing to stage the scene so that it looks better, enter crime scenes without permission, and hold off on reporting important facts to the police, so you wonder if he is willing to go even further than that. Given his overall personality, you can envisage Bloom staging crimes simply so that he can film them. This is really a good, if sometimes troubling, film - the manipulation of events by the press to create a better story is certainly a point of concern in this movie. Nightcrawler is an excellent film about what one man is willing to do simply to get a better shot. 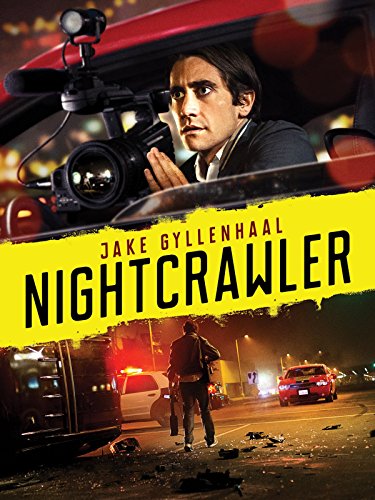