Buy No Escape cheaply from Amazon. You too can earn money from writing articles by signing up for InfoBarrel.
InfoBarrel is a writing platform for non-fiction, reference-based, informative content. Opinions expressed by InfoBarrel writers are their own.
InfoBarrel > Entertainment > Film > Movies

Certificate 15, 103 minutesDirector: John Erick DowdleStars: Lake Bell, Pierce Brosnan, Owen WilsonNo Escape opens with the prime minister - although, as he's wearing what looks like a ceremonial military uniform and there's a significant armed presence all through the country, military dictator might be a more accurate term -  of an unnamed Asian country being killed by rebels after a meeting with a representative of a foreign company. Then, it goes back 17 hours.Jack Dwyer (Owen Wilson, Night at the Museum: Secret of the Tomb, The Internship), his wife, Annie (Lake Bell), and their two daughters, Lucy (Sterling Jerins, World War Z) and Beeze (Claire Geare) are on a plane heading for that country from Austin, Texas. They are currently eleven hours out. Jack would seem to be an engineer, who had previously run his own company before it folded. He is now going to work for a big multinational which is operating a water plant. On the plane they also meet Hammond (Pierce Brosnan, A Long Way Down, The Love Punch), a Brit who may be more than he seems. By the time the Dwyers arrive, it can't be long before the coup takes place, but there is nothing immediately obvious, although both the television and the internet are down.

Credit: https://en.wikipedia.org/wiki/File:No_Escape_%282015_film%29_poster.jpgThe next morning, which is definitely after the prime minster has been killed, Jack goes out for a paper, as the hotel hasn't received their daily supply - a hint of what's to come. He stumbles into a confrontation between armed police and rebels. Fleeing the scene, Jack heads back to the hotel, where witnesses another American shot for being a foreigner outside it. When the crowd see him, they chase him too. Jack's connection with his company doesn't help matters; it seems that the meeting at the beginning of the film probably involved it.Inside the hotel, guests are being summarily killed, often quite brutally, and the staff isn't faring much better. Getting his family, Jack heads to the roof where other survivors of the massacre have gathered, only for them to be gunned down there too. Jack now has to try and get to the American Embassy with his wife and two very young daughters. This in a city where foreigners are being murdered on site, and some of the natives are not faring much better. This is where Hammond crops up again, and shows a certain level of competence in these matters.This may have a high certification, but most of the violence actually happens off camera. The viewer knows that brutal violence is taking place, but they don't actually see it happening. Some of the effects are seen afterwards, but not enough is depicted to actually gauge the full level of brutality - men covered with blood and holding bloodstained machetes, and a view of part of someone's body covered in blood are generally the worst it shows, so the violence is largely implied, rather than being graphic and focused on. Given that the Dwyers are under an almost constant state of threat, people are being slaughtered every few minutes and the tension is almost always high, this stops the film from turning into a gore fest.At the start of the film, certain scenes are slowed down, but fortunately this is stopped reasonably early on, because they are both annoying and ineffective. Quite what they were intended to add isn't clear; perhaps they were intended to emphasise moments of threat, but they failed, bearing more resemblance to scenes from an action film than something intended to show just how much danger the protagonists where in. There is a dig at big corporations, which always seems a bit on the hypocritical side when it comes in films that depend on big companies to survive.There aren't really many true characters in the film, other than the Dwyer family. Hammond's role is not that big and every Southeast Asian depicted is either a nonentity - many of whom wind up dead - or a brutal murderer or thug. Probably the biggest problem with this type of film, where an uprising is taking place in a country and people are being slaughtered, is depicting the events and country in such a way that it isn't insulting to anyone from the region. This is presumably why the country in question is never actually named, but it's still very difficult and, truthfully, the film doesn't manage it. No Escape is a thriller with a constant level of tension, with barely a moment of letup, as the Dwyers head through a city dissolving in chaos with a significant number of people wanting to kill them, albeit not everyone, that is a bit different to the norm, but contains content that some will no doubt find insulting. 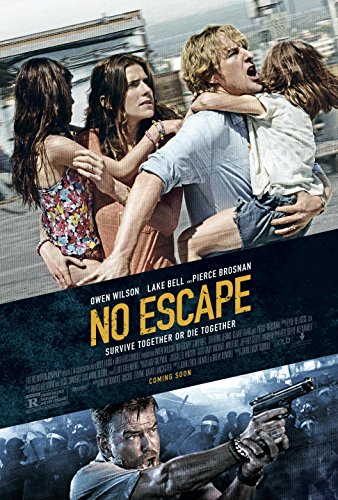