Buy Oblivion cheaply from Amazon or read more articles on film and television. You too can earn money from writing articles by signing up for InfoBarrel.
InfoBarrel is a writing platform for non-fiction, reference-based, informative content. Opinions expressed by InfoBarrel writers are their own.
InfoBarrel > Entertainment > Film > Movies

Certificate 12A, 126 minutesDirector: Joseph KosinskiStars: Tom Cruise, Morgan Freeman, Olga KurylenkoOblivion is based on the (unpublished) graphic novel of the same name by Joseph Kosinski, the director and one of the writers of the cinematic adaptation. In 2017 the Earth was attacked by aliens called Scavengers or "Scavs"; the opening shot of their attacks was them shattering the Moon. The resulting tidal effects from the Moon's destruction caused enormous devastation on the Earth such as earthquakes and tidal waves. This was followed up by a ground assault. Humanity in their battles with the Scavs, which included the use of nuclear weapons, eventually defeated the aliens although bands of Scavs remained at large on the surface. Much of the planet was a wasteland with extensive regions of radiation from the nuclear attacks. Humanity won the war, but lost the planet.60 years later in 2077 humanity has mostly left for Titan, the largest moon of Saturn which is the second largest satellite in the Solar System and possesses an extensive atmosphere, the only natural satellite to have such. Earth is being stripped of its resources, including the use of hydro rigs which convert seawater into power to supply the colony. These rigs are protected by armed combat drones against the remaining Scavs. What's left of humanity on Earth lives in the Tet, an enormous orbital space station, as well as on towers across the Earth.

Credit: http://en.wikipedia.org/wiki/File:Oblivion2013Poster.jpgTechnician Jack Harper (Tom Cruise, Edge of Tomorrow, Jack Reacher, Mission: Impossible - Rogue Nation), "Tech 49," and communications officer Victoria Olsen (Andrea Riseborough, Welcome to the Punch) live in Tower 49. The tower is a small station above much of the cloud layer, although not so high that there is no breathable air, which is connected to the planet's surface far below by a comparatively thin umbilical. Judging by the remains of buildings seen during Jack's patrols, the tower is in the vicinity of New York.Jack and Victoria's mission is drone maintenance and repair. During the day, Jack leaves the station to patrol and repair and drones damaged by Scavs whilst Victoria remains in the Tower in contact with him and mission control. Both were mind wiped five years ago to protect their mission which is by now nearly over. In two weeks they will be leaving Earth to join the rest of humanity on Titan. Their only contact is with Sally (Melissa Leo, Prisoners), mission control in the Tet, who tends to keep asking Victoria "Are you an effective team?" which gets a bit creepy after a while.Even though he was mind wiped, Jack keeps having recurring dreams of a time he is too young to remember, the time before the invasion, and dreams of a woman who he has never met. When he actually meets the woman from his dreams, Julia (Olga Kurylenko), who he finds in a capsule after a crash, and has to protect her from a drone, Jack starts to question his beliefs, especially after he finds a group of human survivors on the surface led by Beech (Morgan Freeman).Oblivion looks great. There are no great surprises in the story - even though there are plot twists, they aren't that hard to deduce - but the film is nicely done and executed with a fairly minimal number of major characters. There is some great looking scenery, such as Cruise driving his bike across a desert littered with wrecked military ships and submarines, or seeing landmarks such as the Empire State Building half buried in the Earth. There may also have been a brief glimpse of the Statue of Liberty's torch. All in all Oblivion is a decent science fiction film that's heavy on the action. 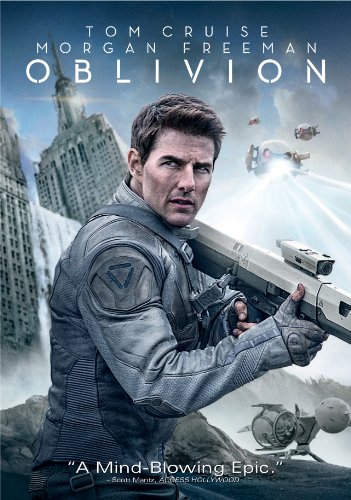