Get Parker cheaply from Amazon, or read more articles on film and television. You too can earn money from writing articles by signing up for InfoBarrel.
InfoBarrel is a writing platform for non-fiction, reference-based, informative content. Opinions expressed by InfoBarrel writers are their own.
InfoBarrel > Entertainment > Film > Movies

Certificate 15, 118 minutesDirector: Taylor HackfordStars: Jason Statham, Jennifer Lopez, Michael ChiklisParker is a crime thriller with strong action elements which stars Jason Statham as the eponymous Parker, a professional thief with some firm principles and, rather oddly for a career criminal, a strong belief that civilized people follow rules, and that there is a penalty for breaking them. Even though his rules may not be the rules most people abide by. The film is based on the novel Flashfire by Donald E Westlake (writing as Richard Stark) - the book is part of entire series about Parker. After a job at the Ohio County Fair that Parker was hooked up to by his partner Hurley (Nick Nolte) the four man crew he is working with, led by Melander (Michael Chiklis), double cross him, steal his share of the money, shoot him and dump his body mistakenly assuming he is dead. Parker survives the shooting and follows them down to Palm Beach, Florida.

Credit: http://en.wikipedia.org/wiki/File:Parker_2013_Movie_Poster.png"It's not the money, it's the principle."Parker decides to take revenge on Melander's crew, not so much to get the money back - indeed, he is at one point offered his share of the original job plus a mark-up, presumably for his inconvenience, as long as he calls it quits - as it is to make a point. If you don't follow his rules, you will pay the penalty and if he allows one crew to think they can double cross him like this, then others will think they can do the same. The crew are doing are job in Palm Beach; Parker follows them there and plans to let them do the robbery and then steal what they stole from them. In Palm Beach Parker meets Leslie Rodgers (Jennifer Lopez, Home), a struggling real estate agent who offers to help him with her local knowledge for a cut of whatever he makes.Parker is typical Statham fare; the film has a lot of action, fights and guns throughout as well as the occasional explosion with an often bloody Statham refusing to give up. Lopez's character Leslie provides a sometimes funny counterpart to Statham's more brutal and physical Parker. This is more admittedly more of an action film with elements of crime than it is a crime thriller. Somewhat surprisingly, Leslie Rodgers is not Parker's love interest; instead his girlfriend is Hurley's daughter Claire (Emma Booth) whose role in the film is rather negligible and could probably have been omitted completely without harming it. Some of the story does seem reminiscent of the 1999 Mel Gibson film Payback - a criminal who is double crossed and whose cut is stolen and is left for dead returns to take revenge - which is possibly not surprising as the novel that film was based on was also written by Westlake writing as Richard Stark. As with most films where Jason Statham plays the main role, if you like his films, you'll probably like Parker. 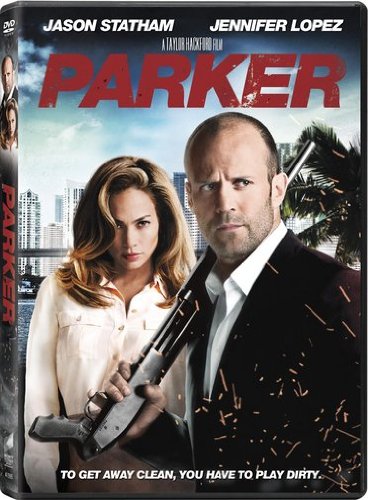 Parker (+UltraViolet Digital Copy) Amazon Price: $14.99 $4.36 Buy Now(price as of Oct 20, 2015)
Parker, a crime thriller starring Jason Statham. The professional criminal Parker is double crossed and left for dead. Recovering, he takes revenge on those who betrayed him.
Next >> Movie Review: The Girl on the Train