Buy Pixels cheaply from Amazon. You too can earn money from writing articles by signing up for InfoBarrel.
InfoBarrel is a writing platform for non-fiction, reference-based, informative content. Opinions expressed by InfoBarrel writers are their own.
InfoBarrel > Entertainment > Film > Movies

Certificate 12A, 106 minutesDirector: Chris ColumbusStars: Adam Sandler, Kevin James, Michelle MonaghanPixels is based on Patrick Jean's short film of the same name which was released in 2010. The film opens in 1982, and a young Sam Brenner (Anthony Ippolito) and his best friend, William Cooper (Jared Riley), are heading to a newly opened video arcade to play on the games. Sam shows a knack for the video games; William does not, but the latter gets Sam to enter the 1982 Worldwide Video Arcade Championships. Sam does well in the competition, ending up tied for first place. To determine the winner, he has to play the obnoxious Eddie Plant (Andrew Bambridge) at Donkey Kong. Eddie wins; Sam loses. The championship is being filmed by NASA who will be sending the tape into space on a probe, which is important to the rest of the story.In the present, Sam (Adam Sandler, Hotel Transylvania 2), is now as electronics repair and installation guy, and William (Kevin James), has managed to do rather better for himself - he's managed, somehow, to become President of the United States, albeit possibly one of the most unpopular ones ever. This friendship results in them doing things like sitting in a bar full of Secret Service personnel, or Sam turning up to the White House in his company van.

Credit: https://en.wikipedia.org/wiki/Pixels_%282015_film%29#/media/File:PixelsOfficialPoster.jpgAt a job, Sam gets attracted to the recently-divorced Violet (Michelle Monaghan), but it doesn't quite work out initially. However, there is plenty of time for them to work on the relationship, as Violet is actually DARPA employee Lieutenant Colonel van Patten, who gets to work with the team during the film. Whilst there, Sam gets asked to come to the White House, as does van Patten.Earlier, the U.S. base on the island of Guam was attacked, with whatever was doing the attack pixilating the buildings there. William has recognised what attacked as being Galaga, which is why he asked Sam to come in. No-one else is that convinced that Earth is being attacked by 80s video games from outer space. After the Taj Mahal is attacked by Breakout, opinions start to change. Sam, and a former friend of his and Williams, Ludlow Lamonsoff (Josh Gad, The Wedding Ringer), a socially awkward conspiracy nut, have to help train some Navy SEALs to fight the aliens. It seems that the probe launched earlier was recovered by an alien race, who took the video tape to be a declaration of war, one which they have accepted. Earth gets three lives, two of which have now been lost. If they lose three, the planet will be destroyed. After a successful defence against Centipede in London's Hyde Park, Eddie (Peter Dinklage, The Angry Birds Movie, X-Men: Days of Future Past), is also recruited, although he is recruited from prison, where he has been locked up for hacking the phone networks.For those being picky, there are a number of problems with the video games that make an appearance in the film. The primary video games, Breakout, Donkey Kong, Galaga, Pac-Man, Q*bert and Centipede, which all, to one degree or another, have a significant role in the film, were all released in 1982 in earlier - mostly earlier. Secondary games, which mostly appear during the final battle when 8 bit video games are attacking Washington, D.C., including such as Tetris, Paperboy and Duck Hunt, along with the television programme Max Headroom, were all created later in the decade and, therefore, could not have been on the video sent into space.Toru Iwatani, the creator of Pac-Man, does appear in the film, but not playing himself - he has a cameo at the beginning. There are also cameos by Serena Williams and Martha Stewart, and Sandler's daughters, Sadie and Sunny, also have small roles.The films is available in 2D and 3D, with the 2D version being the one watched. So, it's a nice, and rather different, idea for a film, but how does it actually turn out? Adam Sandler's films are not exactly known for their high quality, even though they are usually commercial successes. Well, Pixels is probably one of his better ones, but it's certainly not great art. Is rather less crude or offensive than many of them, and fun enough to watch. The graphics, as the Arcaders go up against 8 bit video games, is also fun. The romantic relationship between Sam and Violet plays out just how you would expect, and the characters are rather stereotypical as well, and having the nerds suddenly become needed is no longer an original idea. There are problems with the film. Some of these are factual, such as the problems with later video games appearing and how do these space probes manage to reach other planets outside the Solar System so quickly? It would take a whole lot longer than three and a bit decades. Others are with the characters and story. Still, it's not a bad execution of a rather more original idea, but it could have been better, and Pixels may well appeal more to older audiences who actually remember playing the games in question 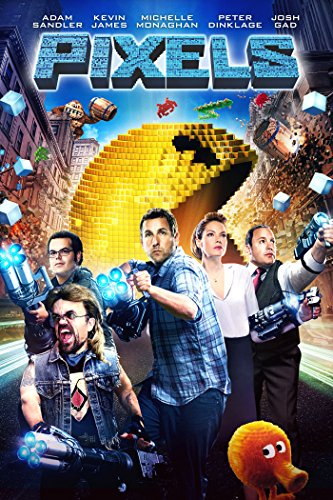