Watch Primer cheaply on Amazon, or read more articles on film and television. You too can earn money from writing articles by signing up for InfoBarrel.
InfoBarrel is a writing platform for non-fiction, reference-based, informative content. Opinions expressed by InfoBarrel writers are their own.
InfoBarrel > Entertainment > Film > Movies

Certificate 12A, 77 minutesDirector: Shane CarruthStars: Shane Carruth, David Sullivan, Casey GoodenIn Primer four engineers are running in their spare time an electronics business out of the garage belonging to one of them, Aaron (Shane Carruth), trying to build devices and sell them. They've had some limited success, but nothing major. Their budget is limited, and to build new experiments sometimes requires them to scavenge items from things like their cars or borrowing from their employers.Two of them, Aaron and Abe (David Sullivan), are working on a project independently of the other two. What they are working on isn't explicitly stated, but it appears to be some type of anti-gravity device which reduces the weight of items. The device, although it seems to work, has an unexpected side effect - it also performs a type of time travel, using what appears to be a conduit between two times, whilst the machine is running. The initial response is to make money out of this - a relatively simple process when you know the future outcome of certain events. Later, they decide to use the time conduit as a means of stopping a crime from happening

Credit: http://en.wikipedia.org/wiki/File:Primer.jpgThis is an extremely low budget independent film, as it cost only $7,000 to make. As such, there isn't much in the way of special effects, strange and exotic locations, or flashy equipment - namely, absolutely none of those. The equipment there is looks like what it is supposed to be, something made in someone's garage, with the occasional custom made part, by skilled engineers, rather than a mass produced sleek piece of machinery. The locations are all prosaic - homes, cars, parks, offices and storage units. There are no special effects, just a few fades. As a consequence of this, there is nothing to hide the plot behind, or rather the lack of one, as happens frequently in more expensive films where the lack of a plot is hidden behind big, flashy things, props and effects.There are often complex conversations between Abe and Aaron, discussing pretty technical engineering matters, to the level at which you can't tell without a suitable background whether what they are saying is genuine or just made up. The writer, director and star Shane Carruth was a former software engineer, and he did actually study the physics to make the dialogue seem authentic, so there is a good chance that some of the more technical stuff is genuine. The story happens around a narration by Aaron, over the phone by the sounds of it, so it is recounting events that have already happened.The return on investment, even from the limited theatre run was, due to the, incredibly low investment, was extremely high. This is a rather complex film, partly due to the somewhat paradoxical nature of time travel. With the film lacking a big budget, it revolves around the interactions between the characters of Aaron and Abe; much of the content is conversations between the two of them. As such, this a dialogue heavy film and, given the complexity of the dialogue, it needs to be concentrated on to understand what is happening. Even then, a second run through of the film is recommended to try and fully understand it. Definitely not a light weight science fiction film, Primer may not be to everyone's taste, but it is certainly recommended, especially to see what can be done with less than a major Hollywood star's hairdressing budget. 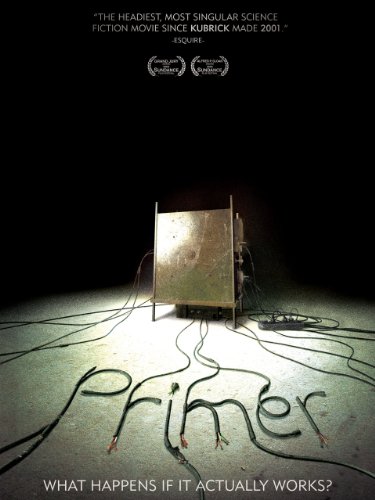