Get Prisoners cheaply from Amazon, or read more articles on film and television. You too can earn money from writing articles by signing up for InfoBarrel.
InfoBarrel is a writing platform for non-fiction, reference-based, informative content. Opinions expressed by InfoBarrel writers are their own.
InfoBarrel > Entertainment > Film > Movies

Certificate 15, 153 minutesDirector: Denis VilleneuveStars: Hugh Jackman, Jake Gyllenhaal, Viola DavisIn Prisoners, Keller Dover (Hugh Jackman) is a religious man running a struggling construction business, as well as something of a survivalist by the looks of things. Where the film is based never seems to be made clear, but it seems to be probably Massachusetts. On Thanksgiving, Keller and his family head over to his friend Franklin's (Terrence Howard, Dead Man Down) house for Thanksgiving dinner.Whilst the family are there, Keller's daughter Anna (Erin Gerasimovich) and Franklin's daughter Joy (Kyle Drew Simmons) go missing. It seems they decided to go back to Anna's house by themselves, not taking their elder brother and sister as they were supposed to. Keller's son Ralph (Dylan Minnette), Anna's older brother, says that the pair were playing on an RV (recreational vehicle, or camper van) earlier. The police search for the RV and find it, and its driver, Alex Jones (Paul Dano). Alex is simple minded and has only the IQ of a ten year old. He lives with his aunt Holly (Melissa Leo, Oblivion).

Credit: http://upload.wikimedia.org/wikipedia/en/6/63/Prisoners2013Poster.jpgDetective Loki (Jake Gyllenhaal, End of Watch, Nightcrawler), a man who seems to have a few rough edges left over from his youth, going by the tattoos he has, which seem rather reminiscent of the sort a criminal would get, and the way he speaks to his captain, tells Keller that they have no choice but to let Alex go. There is no forensic evidence tying him to the two girls, and he is not mentally capable of abducting them.Keller does not believe this. He is absolutely convinced that Alex is responsible for his daughter's disappearance. He takes matters into his own hands, kidnapping Alex. Keller seems to be a man used to being in control, and now he cannot even find his daughter. Things start to escalate as Keller refuses to believe that Alex is innocent, even when the police have another suspect.The plot does keep you guessing. Sometimes Alex does not appear to be what he seems. Does he know something, or not? Is his lack of mental ability genuine, or simply camouflage. As Keller gets pushed further and further, is he simply unreasonably obsessed with an innocent, harmless man who couldn't harm anyone, or is he actually on to something, and Alex is responsible? What depths would a parent stoop to, in order to recover their child? Is there anything they wouldn't do? Nerves become shattered and relationships frayed as time passes and the girls still haven't been found.This is not a particularly cheery film, which is not that surprising given the subject. This is emphasised by the music, which is frequently absent, and doesn't exactly stir your pulse when it's there, and by the weather. The sky is usually grey and overcast, or it's night, it's often raining, and sometimes snowing, all of which increase the overall level of gloom. Never do you see sunshine or anything cheery.Prisoners is quite a long film and rather slow paced. It's quite effective and powerful, and you are kept guessing by the plot, but it feels like it would have actually worked better as a television mini-series, with several hour long episodes spread over several days, rather than a single long film. 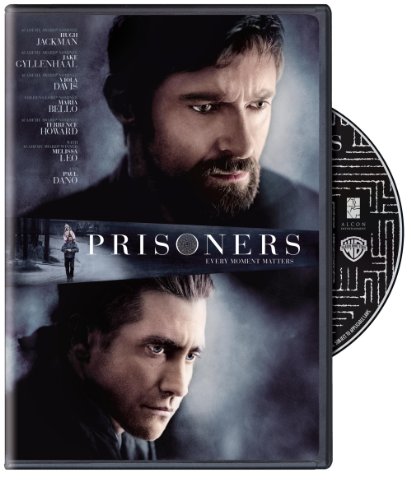