Get Project Almanac cheaply from Amazon. You too can earn money from writing articles by signing up for InfoBarrel.
InfoBarrel is a writing platform for non-fiction, reference-based, informative content. Opinions expressed by InfoBarrel writers are their own.
InfoBarrel > Entertainment > Film > Movies

Certificate 12A, 106 minutesDirector: Dean IsraeliteStars: Jonny Weston, Sofia Black-D'Elia, Virginia GardnerAt the start of Project Almanac, David Ruskin (Jonny Weston, The Divergent Series: Allegiant) is a teenager attempting to get an MIT physics fellowship. His sister, Chris (Virginia Gardner), is filming him and his two best friends, Quinn (Sam Lerner) and Adam (Allen Evangelista), as he puts together a proposal for the scholarship.When things don't turn out quite as well as he wanted, he is rummaging around in the attic of his house looking for ideas to apply for one last scholarship when his sister comes up. Chris comes across an old video camera of their father's. Whilst looking at the footage on it, of David's seventh birthday party, David discovers something odd on the tape - himself. Not himself aged seven, but himself as he is now. David is on a video that was shot ten years ago, but at his present age.

Credit: https://en.wikipedia.org/wiki/Project_Almanac#mediaviewer/File:Project_Almanac_poster.jpgIn David and Chris's basement in his father's - surprisingly well maintained and in generally good condition - former workshop, they discover something in a compartment in the floor. There is part of a device, part of a DARPA thing called Project Almanac, and the blueprints for how to build the complete device. The device is supposedly capable of time travel.After a number of experiments - which involve "borrowing" the battery from the car of David's unrequited crush, Jessie (Sofia Black-D'Elia) - David being rather poor at talking to girls - they manage to get the device working. They then test it using themselves - as Jessie says, they already know that it works on people, because the have the evidence that it does.What would you do with time travel? Well, they first start small - Quinn wants to pass his failed chemistry test, something that takes a few attempts - and move up to winning a decent amount of money on the lottery, whilst experimenting with the device to make it work over longer periods - it first only lasts for three weeks. They notice a couple of minor things, such as having two versions of the same person at different points in their personal timelines together seems to have a negative effect, and there are a couple of minor, unexplainable changes. Then something really changes. Somehow, something they did has caused a whole series of seemingly unrelated, and all bad, changes to the world, such as plane crashes that didn't happen, increased violence and forest fires - a demonstration of what they refer to as the ripple effect but is probably more commonly known as the butterfly effect.[1] The film starts off fun, but then they have to try and fix whatever went wrong, as things get worse.Project Almanac is all filmed using the "found footage"[2] technique where the film is apparently shot by one of the cast - primarily Chris in this case - using their own cameras - mostly the one they found in David's attic, but also with a few other cameras they use to record the experiments. Consequently, the footage is often shaky, sometimes damaged as the camera gets put through the wringer, and the only music in the film is when they are actually listening to music. It is also reminiscent of Chronicle, although possibly more upbeat.The film also has a very common problem seen in time travel films - and less so in television shows - namely, rather than picking one particular time travel theory and sticking with it, they instead picks bits of the two most commonly used theories in fiction and mix them together. Unfortunately, the reason why these are two theories, and not one, is because they are mutually incompatible, which causes - if you are paying attention - a serious breakdown in the story's internal logic by the end of the film. Project Almanac is otherwise a reasonably fun example of the time travel genre that does get darker by the end of it. 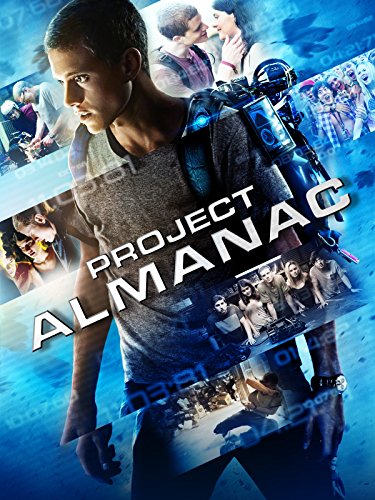