Buy RED 2 or the original RED cheaply from Amazon. You too can earn money from writing articles by signing up for InfoBarrel.
InfoBarrel is a writing platform for non-fiction, reference-based, informative content. Opinions expressed by InfoBarrel writers are their own.
InfoBarrel > Entertainment > Film > Movies

Certificate 12A, 116 minutesDirector: Dean ParisotStars: Bruce Willis, John Malkovich, Helen MirrenRED 2 is the sequel to RED and is based on the DC Comics series of the same name. RED stands for Retired and Extremely Dangerous. After the events of RED, former CIA asset Frank Moses (Bruce Willis) is now living with his girlfriend Sarah (Mary-Louise Parker, R.I.P.D.), but is still retired. Even though Frank seems perfectly content with how their life now is, Sarah gives the impression that she is looking for a bit more excitement - and Frank is certainly trying to keep away from the sort of excitement that his old job generated.Whilst shopping in a Costco for household supplies the pair are accosted by the somewhat erratic Marvin (John Malkovich, Warm Bodies) who says that he and Frank are being hunted due to their involvement in something called Project Nightshade, details of which had been recently released on the internet. Frank dismisses this, but after Marvin is (apparently) killed a few minutes later, he changes his mind. Marvin had, of course, faked his own death.

Credit: https://en.wikipedia.org/wiki/File:RED_2_poster.jpgProject Nightshade was a Cold War plan to smuggle a nuclear weapon into Moscow and assemble it. This plan was actually carried out. The British scientist who designed and built the bomb, Dr Bailey (Anthony Hopkins, Noah, Thor: The Dark World) has been locked up by MI6 (James Bond's organisation, which is in reality called the SIS, or Secret Intelligence Service) in a hospital for the criminal insane for 32 years. Only he knows where the bomb was hidden, and after so long locked up, he is not what could be described as stable. Nightshade is definitely not something that can be allowed to fall into the wrong hands.More and more people get involved. The former MI6 agent, the elegant and extremely deadly Victoria (Helen Mirren) has been given a contract by MI6 to kill Frank and Marvin. The CIA, as well as having Jack Horton (Neal McDonough) pursuing Frank has also hired an assassin called Han (Byung-hun Lee, G.I. Joe: Retaliation, Terminator Genisys) to hunt him down and kill him. Han is supposedly the greatest hitman in the world, and also has a grudge against Frank. The Russians also get involved - they not being best pleased to discover a nuclear device had been secreted in their capital -  with Katya (Catherine Zeta-Jones, Side Effects), a Russian intelligence operative, also looking for Nightshade and who is another person with whom Frank has a history, although not one that resulted with a grudge like Han's. Throughout all this Franks also has to deal with well meaning advice from pretty much everyone, including those out to kill him, on his relationship with Sarah and how to improve it.RED 2 is described as an action comedy and there is definitely humour in it as well as the car chases, shootouts, fights and general violence in various different cities around the world, with bits that are genuinely funny. Some of these bits relate to the aforementioned relationship advice, such as Marvin comparing a relationship to a gunfight, and instructing Frank on how to go about improving the situation using that as a comparison, and other equally helpful bits from equally dubious sources. It's also at least as good as the original film, something that is so often not the case in sequels. RED 2 certainly shouldn't be taken too seriously, but it's a perfectly enjoyable watch. 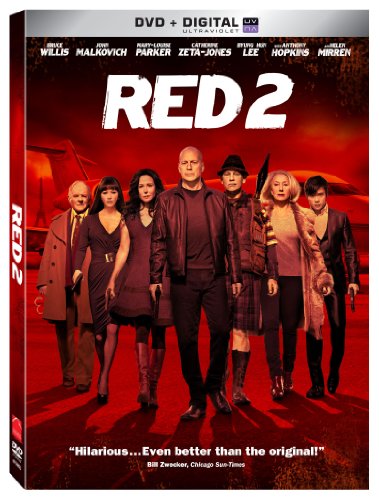