Watch Real Steel cheaply on Amazon. You too can earn money from writing articles by signing up for InfoBarrel.
InfoBarrel is a writing platform for non-fiction, reference-based, informative content. Opinions expressed by InfoBarrel writers are their own.
InfoBarrel > Entertainment > Film > Movies

Certificate 12A, 127 minutesDirector: Shawn LevyStars: Hugh Jackman, Evangeline Lilly, Dakota GoyoReal Steel is set in the not-too-distant future of 2020. Charlie Kenton (Hugh Jackman) is a former boxer who at one time held some promise. Now, however, boxing is done between remote controlled robots, not people, which means that boxers like Charlie are no longer wanted. Instead, he operates his own robot boxer, but he isn't doing that well with his life - which is largely his own fault, as he makes avoidable mistakes and gets in over his head. Charlie is out of money and lacking a robot when he discovers that the mother of his son has died.

After the mother of Charlie's son, Max (Dakota Goyo), dies, leaving him responsible, Charlie has no interest in his son, and is perfectly willing to sign over his rights to Max's aunt, Debra (Hope Davis). When he realises that her husband, Marvin (James Rebhorn), is wealthy, Charlie asks the latter for money in exchange for custody of the boy. Charlie agrees to take Max on for the summer, although he plans to dump looking after him on Bailey (Evangeline Lilly, The Hobbit: The Desolation of Smaug, The Hobbit: The Battle of the Five Armies), who runs the former boxing gym where Charlie used to train and who now helps fix up his robots.

Credit: https://en.wikipedia.org/wiki/Real_Steel#mediaviewer/File:Real_Steel_Poster.jpgCharlie uses the money to buy a new robot, and Max forces Charlie to take him with him. Charlie is still makes mistakes and that robot is destroyed in the ring, leaving Charlie with no robot and no money - again. He takes Max to a scrap yard, looking for parts, where Max discovers the buried form of an old robot, which he digs up.The robot, Atom, is a second generation sparring robot dating back to the early days of the sport of 2014. Max convinces Charlie to get a fight for Atom, even though the latter is convinced that Atom will quickly lose, as the robot is designed to take punishment, not deal it out. When Atom surprisingly wins his first fight, Max convinces Charlie to train Atom to fight properly, using his own boxing skills. Atom's fame starts to spread as he wins fight after fight, and ends up fighting in the boxing league itself.There are rather strong resemblances in the plot to Rocky - a no-hoper boxer (Atom) gets a chance at the big leagues and does better than anyone expects. Although the robots used are supposedly simply remote controlled machines, with no intelligence of their own, you are never entirely certain that Atom is an unintelligent as he is supposed to be. Sometimes, even though he has no ability to talk, there seem to be flashes of intelligence. This is intended, and supposed to keep you wondering whether there is more to Atom than a simple robot.It's also a story about how Charlie becomes a better person. At the beginning, he is pretty much a miserable failure at everything. His son, Max, he doesn't care about at all. Charlie can't remember how old Max is, and it seems that the custody hearing is the first time he has actually laid eyes on him. Charlie is also pretty much abusing Bailey's friendship with him. Although people like him, he simply cannot be depended on, as he takes foolish risks with his robots or gets distracted. Travelling with Max brings out a whole new side to Charlie. He starts to actually appreciate Max for who he is, not simply as a means of raising money. As Max and Atom start winning boxing games, he also gets his drive to win back, beginning to believe that it is possible. The plot of Real Steel may not be the most original one around, but the fighting robots are superb and you do get involved in the unfolding story. 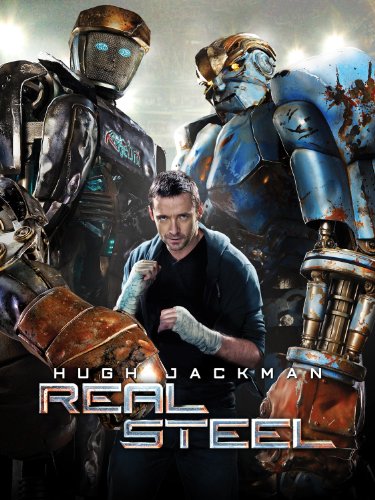