Buy the original Resident Evil film or other Resident Evil products from Amazon. You too can earn money from writing articles by signing up for InfoBarrel.
InfoBarrel is a writing platform for non-fiction, reference-based, informative content. Opinions expressed by InfoBarrel writers are their own.
InfoBarrel > Entertainment > Film > Movies

Certificate 15, 100 minutesDirector: Paul W.S. AndersonStars: Milla Jovovich, Michelle Rodriguez, Eric MabiusResident Evil is the first in the Resident Evil series of films. The franchise is based on the survival horror videogame series of the same name. This first film is based, rather loosely, on the games Resident Evil 1 and 2, taking elements from both games rather than the film's plot following them.It begins with an unknown person taking a virus from a research lab. With the virus released, the Red Queen (Michaela Dicker), the artificial intelligence that controls the facility locks it down and kills everyone in it. Alice (Milla Jovovich, Resident Evil: Afterlife, Resident Evil: Retribution, The Three Musketeers) awakens in a shower, having fallen down. She has no memory of who she is or where she is. When Alice explores her location, she finds that she is in a large mansion, out in the forest, one with sealed drawers full of weapons.

Credit: https://en.wikipedia.org/wiki/Resident_Evil_%28film%29#mediaviewer/File:Resident_evil_ver4.jpgA commando team led by James "One" Shade (Colin Salmon, London Has Fallen) bursts into the mansion and explains that they are there to check on the status of the Hive, a secret underground facility run by the Umbrella Corporation with an access point through the mansion. She, Alice, is an Umbrella Corporation security officer, stationed with a partner to guard the secret entrance to the Hive. Umbrella knows that the Red Queen has killed everyone in the Hive, but they don't know why, so the team is going to use the secret underground train access to get into the Hive before it is sealed off.Things don't go so well. The team manage to get to the Red Queen's command centre, but then they find out just what happened to everyone. The virus which was released earlier has turned them all into flesh eating zombies. They have a limited amount of time to get out of the Hive before the blast doors seal off, whilst battling a large number of virus-infected reanimated corpses, all of whom are hungry for meat, and aren't that fussy as to whether said meat is dead or still attached to a living person.There are many, many things wrong with the film, but it is non-stop action and fun to watch, as Alice fights and shoots her way through the Hive, facing zombies and monster threats, such as weirdly mutated dead dogs, as she discovers a whole range of talents she had forgotten she possessed. In terms of plot, the film is really rather limited - there are a team of commandos with a limited number of bullets trapped in a facility with a large number of zombies and they have to get out. In that respect at least - limited ammunition and constant threat - it does resemble the survival horror of the first video game, but fans of the video game series itself are unlikely to find much in the way of other similarity, as this is more about action than it is exploring a mansion and solving puzzles. In that respect, this is much more of a zombie film than anything else. Given the subject material, there is no way that the film could have avoided being a bit on the gory and violent side. Still, Resident Evil is a fun enough film that, as long as you don't think too deeply about it, it can be a "guilty pleasure" as James Cameron says.[1] 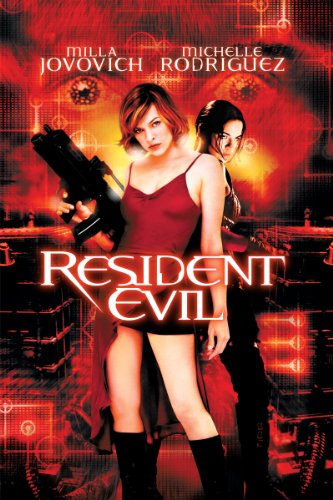