Get Resident Evil films and games and Resident Evil: Retribution from Amazon. You too can earn money from writing articles by signing up for InfoBarrel.
InfoBarrel is a writing platform for non-fiction, reference-based, informative content. Opinions expressed by InfoBarrel writers are their own.
InfoBarrel > Entertainment > Film > Movies

Certificate 15, 96 minutesDirector: Paul W.S. AndersonStars: Milla Jovovich, Sienna Guillory and Michelle RodriguezResident Evil: Retribution 3D is the fifth film in the series based on the popular Resident Evil video games. At the end of the previous film Resident Evil: Afterlife, during the credits, the tanker Arcadia was attacked by a squadron of Umbrella Corporation military tilt-rotors. The attack was commanded by Jill Valentine (Sienna Guillory) who was wearing a mind control device identical to the one Claire Redfield had worn earlier in the film.At the beginning of Retribution the tilt-rotor attack is first shown backwards and slowed down, then there's a clip of Alice (Milla Jovovich, Resident Evil, The Three Musketeers) giving a quick recap of what happened in the previous four films (although these don't always appear to be in the right order) before the attack is played out again, but this time at normal speed and forwards.Alice has been captured by Umbrella and next appears in a scene set in Raccoon City that is extremely reminiscent of the suburban zombie attack close to the beginning of the 2004 remake of George A Romero's Dawn of the Dead.

Credit: http://en.wikipedia.org/wiki/File:Resident_evil_retribution_poster.jpgA number of characters from previous films in the Resident Evil franchise appear, even if they actually died in the films. From the original Resident Evil film both Rain (Michelle Rodriguez, Fast & Furious 6, Fast and Furious 7, Machete Kills) and James "One" Shade (Colin Salmon, London Has Fallen) reappear and from the films Resident Evil: Apocalypse and Extinction Carlos (Oded Fehr). A good explanation is provided for this is provided in the film fortunately.Some more characters from the Resident Evil games also are in Retribution; Ada Wong (Bingbing Li) and Leon S. Kennedy (Johann Urb). Luther West (Boris Kodjoe) previously seen in Afterlife and Albert Wesker, played again by Shawn Roberts, are also in Retribution. Wesker survived by parachuting out of the craft Alice had set the bomb on in Afterlife. Alice didn't actually know this, so it's odd she doesn't ask how he survived. Jill Valentine appears again, still under the influence of the mind control device.The trailer to the film was somewhat confusing in parts, as it appeared that the series had gone back in time to before the virus spread across the world - there's even a repeat of part the scene with the J-Pop Girl (Mika Nakashima) in Tokyo from the beginning of Afterlife. It appears this may have been deliberately confusing; it made a lot more sense in the film itself.The 3D is most noticeable in some of the fight scenes, which are played out in slow motion and have some projectile apparently hurtling out of the screen into the audience - and there are an awful lot of fights in the film. The rest of the time it isn't that noticeable.Of all the films in the Resident Evil franchise, this is many ways most closely resembles the original, with much of the action taking part inside within the corridors and rooms of a secret Umbrella Corporation facility, rather than the city and worldscapes of the other sequels. Going by the end of the film, another sequel looks to be on the cards as long as this one performs well enough at the box office (and it certainly looks like it has). So much for it being planned as a trilogy.None of the Resident Evil films are exactly masterpieces. This is one of the better ones in the franchise. If you liked the other films, and like zombie and monster-killing action (and some of the monsters have got much bigger) then you'll probably like this. Resident Evil: Retribution is enjoyable action filled fun, if not particularly plot heavy. 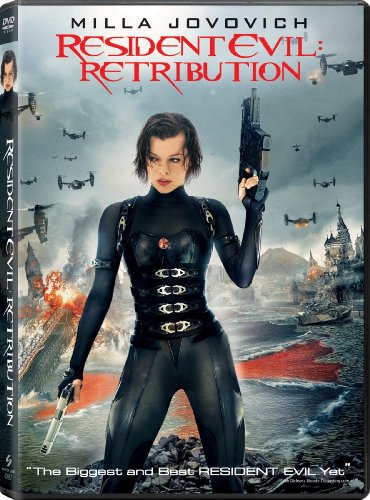