Buy Ride Along 2 or the original Ride Along from Amazon. You too can earn money from writing articles by signing up for InfoBarrel.
InfoBarrel is a writing platform for non-fiction, reference-based, informative content. Opinions expressed by InfoBarrel writers are their own.
InfoBarrel > Entertainment > Film > Movies

Certificate 12A, 102 minutesDirector: Tim StoryStars: Ice Cube, Kevin Hart, Tika SumpterRide Along 2, the sequel to Ride Along, opens in Miami, with businessman Antonio Pope (Benjamin Bratt) on his yacht in the harbour. He gets his computer hacker to make him an encrypted cell phone, which he then uses to call Port Commissioner Griffin (James Martin Kelly). Apparently the Port Commissioner had been paid $1 million to ensure that Pope's illegal shipments got through without being stopped. However, the shipments were stopped, because Griffin says he never received the money. Pope isn't happy, and has him killed. The hacker, A.J. (Ken Jeong, The Hangover Part II, The Hangover Part III) is listening in on the call, and it appears that he was the one who took the money.Back in Atlanta, Detective James Payton (Ice Cube, 21 Jump Street, 22 Jump Street) and his partner Mayfield (Tyrese Gibson, Fast & Furious 6, Fast and Furious 7) are attending a car meet where they are going to buy a large quantity of the drug M-CAT from supplier Troy (Glen Powell). Ben Barber (Kevin Hart, Central Intelligence, Get Hard, The Wedding Ringer), or Black Hammer (his gaming name) is only a month out of the police academy, but has been allowed to shadow the meet in the surveillance van. When Troy pulls a gun, Ben decides that soon-to-be brother-in-law James needs his help, and intervenes. Things go rapidly south from that point, and Mayfield gets injured, although Troy is taken into custody. Although only after a car crash.

Credit: https://en.wikipedia.org/wiki/File:Ride_Along_2_poster.jpgTroy had on him a flash drive with some heavy duty encryption on it. The hacker who made the encryption has digitally signed his work, and it's A.J., the hacker from the yacht. Payton wants to go to Miami to scoop up the hacker so that they can decrypt the flash drive, and is given the go-ahead. Ben wants to accompany Payton to Miami, but the latter really doesn't want him to come along. Ben's success in his first ride along has led him to believe he has what it takes to be a detective; James is less than convinced to say the least, and still finds him a rather irritating.Ben is also getting married to Payton's sister, Angela (Tika Sumpter), in a week, and is clashing quite badly with the wedding planner, Cori (Sherri Shepherd). Ben may be the groom, but he's doing a definite bride from hell impersonation - enough so that Angela tries talking her brother into taking Ben to Miami with him, to get Ben out of her hair. James initially refuses, but then decides that this will finally show Ben that he doesn't have what it takes to be a detective and changes his mind. The trip is supposed to be a milk run, so all that will happen will be that Ben is finally shown that he should forget about trying to be a detective. What could possibly go wrong?An attempt to kill A.J. in a club in Miami (by the same shooter who killed the Port Commissioner, not that they know that initially) gives Ben the chance to show off his gun knowledge again, and this leads local Homicide detective Maya (Olivia Munn, X-Men: Apocalypse) to realise the two cases are connected. Ben had already tangled with the detective when he was updating his wedding Pinterest dream board on her computer. It's clear that James and Maya are going to hit it off and, after Payton has another car blown up, they team up and go after Pope together. Pope is a respected local businessman with a lot of local, and not-so-local, influence, so bringing him down is going to be tricky.A car chase scene is done with Ben driving, with him visualising it as a car chase in a computer game, complete with scores and bonus points, as his progress through the film mostly irritates his straight man James, although Ben and A.J. hit it off pretty well - and the latter, despite his appearance, is definitely a player with the ladies. There are more explosions, and Ben again shoots someone by accident - perhaps he shouldn't really have been given a gun for real. The plot is by and large pretty predictable, with even the supposed twist being so commonly used in cop films that you can see it coming a mile off. There are also some fairly unsubtle references to James lacking a "plus one" to Ben and Angela's wedding early in the film make it pretty obvious that he is going to finish the film with a plus one, and who that person will be.Kevin Hart once again plays Kevin Hart - a small, excitable man with a rapid mouth playing opposite someone much bigger. Given that he always seems to play the same role, the question is beginning to be raised as to whether he can actually play any other roles (and whether he is actually playing a role, or simply being himself). Not that, at 5'4" tall, he can really do anything about the small man playing opposite someone bigger (even though he does have a tendency to pick people who are substantially larger), but the other parts he could, and he really needs to do it soon. If he doesn't, the small, excitable fast-talker will be the only role he will ever play, and it will eventually become tiresome. At which point he could quite easily vanish from the scene to be replaced by the next one.This film is what it is. It's a buddy-cop movie with a cookie-cutter plot with a bog-standard and easily guessable twist featuring an unlikely pair of partners and an upcoming love interest who can be seen a mile off. There are some laughs in it, but don't expect great art, or even anything terribly memorable. Instead, Ride Along 2 is simply reasonably enjoyable light entertainment that shouldn't be looked at too deeply, and which is successful enough that another film in the series seems pretty likely. 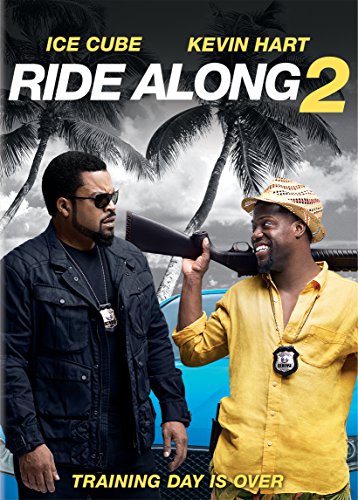