Get Rush cheaply from Amazon, or read more articles on film and television. You too can earn money from writing articles by signing up for InfoBarrel.
InfoBarrel is a writing platform for non-fiction, reference-based, informative content. Opinions expressed by InfoBarrel writers are their own.
InfoBarrel > Entertainment > Film > Movies

Certificate 15, 123 minutesDirector: Ron HowardStars: Daniel Brühl, Chris Hemsworth, Olivia WildeRush starts at the beginning of the 1976 German Grand Prix, with the cars on the grid, held at the infamous old Nürburgring, before going back six years to 1970. British driver James Hunt (Chris Hemsworth) is competing in a Formula 3 race at Crystal Palace in London, driving for Hesketh Racing which is owned by Lord Hesketh (Christian McKay, The Theory of Everything). Here he meets and competes against Austrian Niki Lauda (Daniel Brühl, Captain America: Civil War) for the first time. The film is about the rivalry, whether completely real or exacerbated by the media, between the pair during the 1976 Grand Prix season.At the Crystal Palace race neither has started racing for Formula 1 as yet. Hunt is a hard drinking, womanising playboy with a talent for driving fast and a determination to enjoy life. Lauda is a more calculating driver who does not live the high life, and has a gift for getting the best out of cars. Both men are, in their own way, pretty arrogant, but Hunt also can behave more charmingly and as a consequence is better liked by the other drivers.

Credit: http://en.wikipedia.org/wiki/File:Rush_movie_poster.jpgHunt and Lauda both want to start competing in Formula 1. Lauda borrows money and buys his way into the BRM team, before ending up on Enzo Ferrari's (Augusto Dallara) Ferrari team. Hesketh Racing at the same time buys a Formula 1 car and Hunt starts competing against Lauda in the 197 season. By the end of 1975, though, Lord Hesketh has run out of money and is no longer able to afford to keep supporting the team. Hunt is desperate to get behind the wheel again, and gets a job driving for McLaren.Rush then quickly goes through the highlights of the 1976 season before returning to the German Grand Prix that started the film, a race that Lauda feels should be cancelled due to poor driving conditions. The 1976 Grand Prix was the last Grand Prix race held on the old Nürburgring. Lauda is seriously, and almost fatally, injured in a crash during the race that puts him in hospital for some time, before he returns to racing.The film is not just about Hunt, it is at least as much about Lauda, and especially about the relationship between the pair and how they drive each other to excel. Niki Lauda (the character) does a narration during the film. Even though anyone familiar with how the 1976 season finished will know what happened, at least roughly even with minimal knowledge, watching the races is still pretty gripping as you wait to see what is going to happen. There are a number of racing scenes in the film, some of a decent length, that may also include some historical footage by the looks of things.Rather unusually for a Hollywood film based on a true story, this is, according to Niki Lauda, very accurate in its portrayal of what happened, although the relationship between the two was not as confrontational before Lauda's accident as it is shown in the film.[1] There are some rather unpleasant accident scenes, and Lauda's hospital treatment scenes are often unpleasant to watch. A bit of a jarring note at the end is when some actual footage of the real James Hunt and Niki Lauda is shown as, although the actors come pretty close to the real people in appearance, they are still not the same. Overall, Rush is an exciting film based on actual events that keeps you gripped to the end. 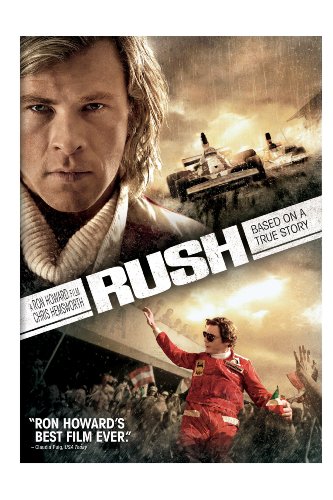