Get Safe House cheaply from Amazon, or read more articles on film and television. You too can earn money from writing articles by signing up for InfoBarrel.
InfoBarrel is a writing platform for non-fiction, reference-based, informative content. Opinions expressed by InfoBarrel writers are their own.
InfoBarrel > Entertainment > Film > Movies

15 Certificate, 115 minutesDirector: Daniel EspinosaStars: Denzel Washington, Ryan Reynolds and Robert PatrickMatt Weston (Ryan Reynolds, Deadpool, R.I.P.D., X-Men Origins: Wolverine) is a CIA employee in Cape Town, South Africa. His cover is that of a worker at a free clinic in Cape Town, funded by an NGO (Non-Governmental Organization). His actual job is that of the "housekeeper" of a CIA Safe House at the same location. He is not a "NOC" which means Non-Official Cover and operates under his own name.He has a French doctor girlfriend, Ana Moreau (Nora Arnezeder), who is shortly moving to Paris, and he is trying to get a CIA job in Paris. His current position is in fact very boring. Weston has been looking after the safe house for a year, which basically involves sitting around watching monitors all day and waiting for a phone call to see if his services are required.

Credit: http://en.wikipedia.org/wiki/File:Safe_House_Poster.jpgTobin Frost (Denzel Washington, 2 Guns, The Equalizer) is a former CIA operative who went rogue nine years previously. Now, he makes a living stealing and selling secrets. His latest transaction, in which he buys a microchip, goes awry and, on the run from his assailants, he decides that the nearby US Consulate is his only option for escape and turns himself in.The CIA want to question Frost, and Weston gets a customer to his safe house. A team takes Frost there, and starts torturing him by waterboarding. The safe house has been compromised, and is attacked. Weston is forced to flee with Frost, leading to a car chase through the streets of Cape Town, whilst Weston gets a "go bag" that has the location of another safe house on a GPS unit inside it. Frost escapes from him, and Weston is officially removed from the case. He does not cease his attempts though.Frost is a past master at manipulating people and, whenever he is around Weston, continues to make comments designed to undermine his confidence in the system, his superiors and the CIA. Some of these doubts may well be justified; after all, how did the attackers get ahold of the location of the safe house and the fact that Frost was being taken there. One of the officials in the CIA, Catherine Linklater (Vera Farmiga), is convinced that Weston himself has gone rogue and has joined forces with Frost, based on her reading of the evidence, although Weston's boss, David Barlow (Brendan Gleeson, Edge of Tomorrow), is less convinced and considers Weston's actions to be an attempt to prove his competence.The pursuit of Frost by the hired guns and Weston leads to a continuing pursuit and gun battle through Cape Town and one of its' townships. The files that Frost has possession of are dangerous enough that someone is willing to go to any lengths to recover them.Safe House is a perfectly decent action thriller, with fights, gun fights, car chases and betrayal. Denzel Washington is not really used to his best advantage, but fulfils his role perfectly competently. There is a fair amount of violence in the film. If you like action thrillers, you'll probably like Safe House. 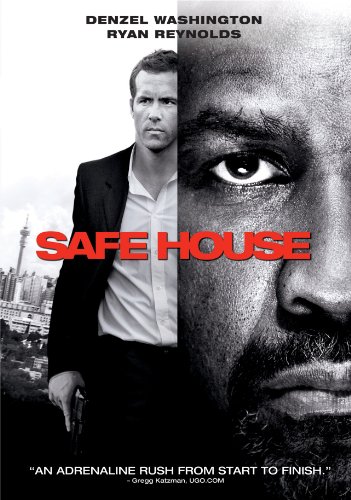