Watch Scouts Guide to the Zombie Apocalypse on Amazon. You too can earn money from writing articles by signing up for InfoBarrel.
InfoBarrel is a writing platform for non-fiction, reference-based, informative content. Opinions expressed by InfoBarrel writers are their own.
InfoBarrel > Entertainment > Film > Movies

Certificate 15, 93 minutesDirector: Christopher LandonStars: Tye Sheridan, Logan Miller, Joey MorganScouts Guide to the Zombie Apocalypse opens with a janitor cleaning a hall and lab in Biotine Laboratories. Whilst a scientist goes to get something from a vending machine, the janitor, Ron (Blake Anderson), despite being instructed not to touch anything goes in a curtained off area in the large lab. In this area a body of a man is on a hospital bed wired up to some machines. The man is obviously in bad shape, and he has a tag saying "D.O.D." on it. Ron decides that the man's name is, therefore, "Dod." When Ron catches the equipment, "Dod" apparently dies, so Ron tries to resuscitate him. When Ron's hand's go through the dead man's chest, the latter rises up and attacks him. And this is where it begins. The man was obviously being experimented on, but was oddly not fastened down in any manner, so when he turned he was free to get up and wreak comedic havoc, throwing Ron around the room in silence as this is viewed through a soundproofed window.In the town of Deer Field in California, Augie (Joey Morgan), Ben (Tye Sheridan, X-Men: Apocalypse) and Carter (Logan Miller) are scouts. In fact, their troop consists of only them and Scout Leader Rogers (David Koechner, Krampus) - who is always addressed as Scout Leader Rogers - and they are perennially unsuccessful at getting anyone else to join up. Augie is a die-hard scout, the other two, not so much. Ben is sort of in the middle and Carter is tired of it, but both are wanting to quit - as Scouts, they aren't getting much respect - and haven't dared to tell Augie as yet, because Scouting means a lot to him, and they don't want to hurt his feelings.

Credit: https://en.wikipedia.org/wiki/File:ScoutsGuideZombieApocalypse_poster.jpgAugie has just earned his Condor Badge, and the three of them and Rogers are going to a camp out in the forest. On the way there, Ben and Carter accidentally run over a deer. The car is damaged, and the deer is obviously dead. Whilst they are fixing a flat tyre, Carter's sister, Kendall (Halston Sage) passes with her boyfriend - although Ben has a definite crush on her. There's a big party going on tonight, and Carter really wants to go, so they plan to leave whilst Augie and Rogers are asleep. During the conversation, the obviously dead deer mysteriously vanishes - the first sign of trouble, although it isn't clear at this point whether the deer vanishes because it was taken by a zombie, was already dead before it was hit, or has turned whilst it was lying in the road.Rogers never turns up for the camp out - he ran into a zombie deer along the way - and Ben is a bit concerned. Still, he and Carter decide to head into town anyway. In the forest, they stumble across Rogers' lucky knife and, when they get into town, it is oddly quiet and there are some signs of violence. Ben is getting increasingly concerned, but Carter is oblivious. When the bouncer is seen to be missing from the door of the strip club across the way, Carter suggests they go in - and the club is oddly deserted. It's only when they are attacked by a zombie stripper that Carter realises that there is a problem. They are rescued by a cocktail waitress who works at the club, Denise (Sarah Dumont). Now they have to find Augie, find the party that Carter's sister is at, and get out of a mostly evacuated town before it is destroyed by the military, all while being under attack from zombies - and zombies that are often fast, surprisingly competent and seem to retain a degree of their former knowledge and skills. Including zombie animals, which is rather more unusual. This allows them to show just what uses you can find from the skills gained whilst obtaining Scout merit badges - although bomb making is a bit of a reach.This is a comic horror film, and the humour is often on the, sometimes perhaps unnecessarily, crude side - one of the cruder scenes involves a pron star. There is also a lot of violence, especially in killing the zombies in often quite inventive ways with a variety of improvised weapons. There is, as is common in zombie films, an awful lot of gore - but it's not of the sickening, "this is cool," level, but instead of the type where it has been taken to ridiculous, and often deliberately ludicrous, extremes. The character of Denise is a bit more interesting than it might seem at first glance. Her appearance may be stereotypical - chesty, wearing a strappy, skin-tight top and short shorts - but her behaviour isn't, and she's both a bit older and a bit wiser than the boys, and she proves equally competent at zombie destruction, rather than being the stereotypical character she appears to be. There's also a theme of friendship between the three main characters, a friendship that was threatened by the potential loss of their common ground, Scouting.Be sure to watch the end credits, as the initial credits are various selfies, both taken during the zombie apocalypse, and after it, and there is also a brief mid-credit scene to watch out for. The story and the lines may not be brilliant, and the zombies often fail to obey any sort of consistent logic in their behaviour - logic is tossed out of the window if the alternative has humorous potential (even if that is debateable and dubious) - but it can be quite watchable. Scouts Guide to the Zombie Apocalypse should not be taken too seriously, and it is almost always violent from very near the beginning, with ridiculous amounts of blood and gratuitous scenes of a sexual nature - but as long as you don't expect too much, and don't mind seeing zombies killed in a whole range of different, and often odd, ways, it's perfectly watchable. 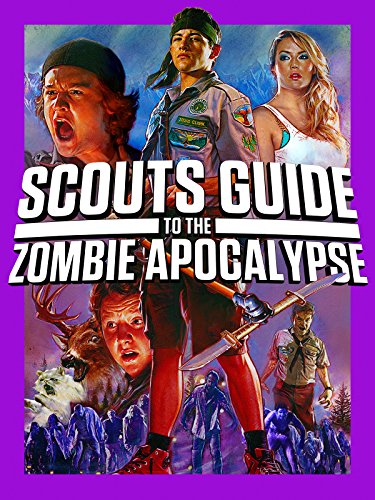