Buy Scream 4 cheaply from Amazon or get the complete Scream series including Ghostface mask. You too can earn money from writing articles by signing up for InfoBarrel.
InfoBarrel is a writing platform for non-fiction, reference-based, informative content. Opinions expressed by InfoBarrel writers are their own.
InfoBarrel > Entertainment > Film > Movies

15 certificate, 111 minutesDirector: Wes CravenStars: Neve Campbell, Courteney Cox and David ArquetteGhostface is back, and he's after Sidney again. Ten years have passed since the original Woodsboro killings, and Sidney Prescott (Neve Campbell) has returned to her home town as part of her book signing tour for her new self-help book. Dewey Riley (David Arquette) is now sheriff and married to Gail Weathers-Riley (Courteney Cox, Friends). The new Ghostface seems angrier than those in previous films, with even more of a grudge than before.The film starts with the obligatory phonecall and the murders of two girls, Sherrie (Lucy Hale, Pretty Little Liars) and Trudie (Shenae Grimes).

Credit: http://en.wikipedia.org/wiki/File:Scream4Poster.jpgAfter the initial killings which Ghostface ties Sidney to as a suspect, she is forced to remain in town and stays with her aunt Kate Roberts (Mary McDonnell) and her cousin Jill (Emma Roberts, We're the Millers). Yet more killings ensue as Ghostface rampages across town.As has been typical of the series, the characters constantly refer to horror films and the horror film genre, and reference many different films. The discussions, as in previous films, act as if they are in a film and the killer is playing the part of a film killer. There are also repeated references to the Stab franchise, which is the "fictional" film series based on the "actual" events of the Ghostface killings, and has kept producing sequels even after though there were no actual Ghostface killings after the ones in the "real life" trilogy.In Scream 3, Ghostface was described as being that rarest of movie serial killers, a slasher from a trilogy - which would suggest there wasn't going to be a sequel. The in-film discussions about the horror film genre discuss the latest killings as being those of a remake or reboot of the series, with the killer attempting to copy but exceed the murders in Scream, which would make Scream 4 the first in a new series, rather than a sequel to the original trilogy. This is probably a reference to the recent reboots of the Halloween, Nightmare on Elm Street and Friday the 13th franchises.As they believe they are in a reboot or remake of the original killings, the characters suggest the killer has to keep up with the times and should now film his own murders. Also, in an attempt to surpass the original, even previous survivors may no longer be safe, so even Sidney, Gail or Dewey could die. Dewey's attempts to keep a lid on things aren't helped by the fact that the first killings quickly spread across the internet.Scream 4 itself isn't groundbreaking, but then it probably isn't supposed to be, as, to some extent like the rest of the series, it parodies the entire genre, although the parody is that of a fan of scary movies. As usualy, you are guessing as to  the identity of Ghostface throughout the film. A good proportion of the film is taken up with the new cast members, all of whom are younger than the originals. Not that necessarily means they are going to survive. A perfectly decent somewhat tongue in cheek take on the slasher films. 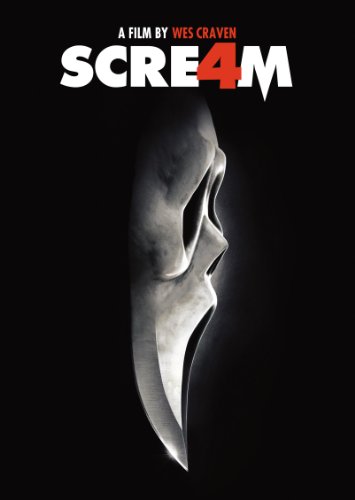