Get Season of the Witch from Amazon or read more articles on film and television. You too can earn money from writing articles by signing up for InfoBarrel.
InfoBarrel is a writing platform for non-fiction, reference-based, informative content. Opinions expressed by InfoBarrel writers are their own.
InfoBarrel > Entertainment > Film > Movies

Movie Review: Season of the Witch

Certificate 15, 95 minutesDirector: Dominic SenaStars: Nicolas Cage, Ron Perlman and Claire FoyIn Season of the Witch Behmen von Bleibruck (Nicholas Cage, Ghost Rider: Spirit of Vengeance, Stolen) and Felson (Ron Perlman, Conan the Barbarian, Drive) are both Teutonic Knights who are fighting for the Church. It is set during the Crusades, and finally in the Smyrniote Crusades (even though the Teutonic Knights didn't seem to take part in the Smyrniote Crusades) which were after the main Crusades and the defeat of the Crusader Kingdoms in the Holy Land. Behmen and Felson take part in many battles over the years, climaxing in the attack on Smyrna, a strategic city located on the Aegean cost of what is modern day Turkey - not all of the Crusades took place in the Holy Land, especially after the loss of the Crusader lands there.

Credit: http://en.wikipedia.org/wiki/File:Season_of_the_Witch.jpgTired of the killing in God's name, especially of those that seem innocent, Behmen and Felson finally desert and return home to find a plague (the Black Death) has covered the land. There, they are charged by Cardinal D'Ambroise (Christopher Lee, Hugo, The Hobbit: An Unexpected Journey, The Hobbit: The Battle of the Five Armies) who is also infected with the plague with escorting a young girl who is a suspected witch (Claire Foy), believed responsible for the spread of the plague, to a distant monastery in order to have her powers destroyed by the monks there. Behmen agrees, but only if the girl is released if it is proven that she is not a witch. It was quite common for being proven to not be a witch to be fatal. Being proven to be a witch was also fatal, so being accused was usually a death sentence either way - either proving your innocence killed you, or being found guilty resulted in execution.As well as the imprisoned girl Behmen and Felson are accompanied by Hagamar (Stephen Graham), a fraudster who is their guide, a priest, Debelzaq (Stephen Campbell Moore), another knight, Johann Eckhart (Ulrich Thomsen), who has lost his family to the plague and an altar boy, Kay von Wollenbarth (Robert Sheehan) who wants to become a knight like his deceased father.The path to the monastery is dangerous and treacherous, even though it is only a few days away from the town where they started. Sometimes the girl seems guilty of witchcraft, sometimes she doesn't, causing Behmen and Felson to doubt whether they are doing the right thing.Season of the Witch is rather dull, even though there are some actors in the film who are either decent or can make some enjoyable nonsense - this is the sort of film Cage and Perlman should be good at.Possibly the best part of the film is that, like her escorts to the monastery, you are constantly guessing whether or not the girl is guilty as charged - sometimes she seems innocent, at other times she seems manipulative. Other than that, the plot - especially in some parts - is fairly standard. Season of the Witch doesn't live up to its potential and could have been a better film than it is. 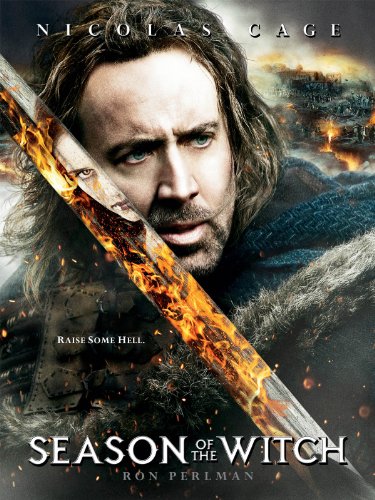