Get Seeking a Friend for the End of the World from Amazon or read more articles on film and television. You too can earn money from writing articles by signing up for InfoBarrel.
InfoBarrel is a writing platform for non-fiction, reference-based, informative content. Opinions expressed by InfoBarrel writers are their own.
InfoBarrel > Entertainment > Film > Movies

Movie Review: Seeking a Friend for the End of the World

Certificate 15, 101 minutesDirector: Lorene ScafariaStars: Steve Carell, Keira Knightley and Melanie LynskeyAt the beginning of Seeking a Friend for the End of the World Dodge Peterson (Steve Carell, The Incredible Burt Wonderstone, Despicable Me 2) and his wife Linda (Nancy Carell - yes, they are related, she's his real life wife) are sitting in their car listening to a radio announcement. The shuttle Deliverance has failed in its' last ditch mission to prevent the 70-mile wide asteroid called "Matilda" from hitting Earth. The asteroid will now impact in three weeks. At this point his wife gets out of the car and runs off.

Credit: http://en.wikipedia.org/wiki/File:Seeking_a_Friend_for_the_End_of_the_World_Poster.jpgDodge keeps going through the motions of his life, turning up to his job as an insurance salesman whilst the world falls apart around him with people reacting in different ways, whether it's suicide, drugs or promiscuity (a man at a friends party that women don't care about disease, pregnancy, whether you'll be there for them in the morning or even if you're related), whilst Dodge feels there's no point in doing anything like that and doesn't really want to spend the last days of his life getting to know someone new.This changes when he finds his neighbour Penny (Keira Knightley, Jack Ryan: Shadow Recruit,The Imitation Game) crying on the fire escape outside his apartment. Dodge had been thinking about his old girlfriend from high school, Olivia. Penny suggests he go and seek her out - after all, it's not like there's much time left to do anything in - and eventually they do, along with a dog that Dodge found tied to him whilst passed out in the park which he calls "Sorry" after the note that was left with it.What then ensues is a road trip where Penny and Dodge travel to the last place Dodge saw Olivia which was 18 years previously. Along the way they meet the usual collection of eccentrics that you would see in a road trip film, including survivalists and people being baptised - only exaggerated as they are all dealing with the upcoming destruction of the world.The upcoming disaster is a mostly background item, with updates provided by the unnamed news anchorman (Mark Moses) who continues to do his job as the world falls apart.Seeking a Friend for the End of the World isn't exactly a film with a truly happy ending - the clue is in the "End of the World" part of the title and this isn't an action film where the cast is trying to prevent the asteroid colliding - so probably not a suitable film to watch to cheer you up, even if it has got a fair amount of humour in it. It doesn't really fit in any of the standard categories, being a darkly humorous romantic comedy set during an apocalyptic time. Steve Carrell does his usual understated comedy and Keira Knightly does a good performance as his somewhat erratic younger neighbour and the two interact well - even though there are a fair few other people in the film, given the "road trip" nature of it, most of the other characters are just passing through, so much of the film relies on the interaction between the two main characters. 3.5/5. 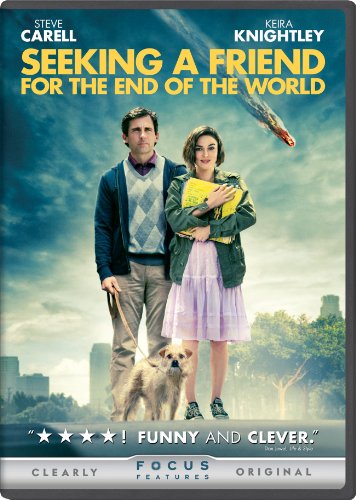