Buy Sicario cheaply from Amazon. You too can earn money from writing articles by signing up for InfoBarrel.
InfoBarrel is a writing platform for non-fiction, reference-based, informative content. Opinions expressed by InfoBarrel writers are their own.
InfoBarrel > Entertainment > Film > Movies

Certificate 15, 121 minutesDirector: Denis VilleneuveStars: Emily Blunt, Josh Brolin, Benicio Del ToroSicario opens with the statement that the word originates from one used to describe zealots operating in Judea (the Sicarii, meaning dagger-men) in the 1st Century A.D. who were attempting to expel the Romans by killing them and their sympathisers[1] - assassins from before the term existed in other words - and that in Mexico it means hitman.The first scene is of a SWAT and FBI raid on a house in Chandler, Arizona, led by FBI agent Kate Macer (Emily Blunt, Edge of Tomorrow, Looper, The Huntsman: Winter's War) who works for the Kidnap Response Team. The raiders are looking for hostages, but what they actually find are a few hostiles and bodies hidden in the walls - an awful lot of bodies. And a booby trap that kills two police officers. The house is believed to be owned, indirectly, by Manuel Diaz (Bernardo P. Saracino), a businessman believed to be the head of the Sonora drug cartel's operations in the United States.

Credit: https://en.wikipedia.org/wiki/Sicario_%282015_film%29#/media/File:Sicario_poster.jpgThis raid results in the Department of Justice forming an inter-agency task force, headed by Matt Graver (Josh Brolin, Guardians of the Galaxy, Men in Black 3, Sin City: A Dame to Kill For), a person of indeterminate official origin but who gives the impression that he is probably working for the CIA. He seems to be after Kate to join the task force, but she must volunteer for the assignment if she wants to join it.Kate agrees, and together with Graver and a mysterious man named Alejandro (Benicio Del Toro), flies to El Paso in Texas. There, a team including U.S. Marshals and Delta Force operatives are going into the city of Ciudad Juárez just over the border to bring back a high value target, a member of the Sonora cartel, to the United States from where he is being held. An attempt to stop the extraction is expected, and happens.This is all part of some mysterious operation being carried out against the Sonora cartel. Graver says that what they plan to do is overreact to recent events, so that towns on the U.S. Mexican border don't turn into places like Juárez, where gunfire is a constant fact of life and mutilated naked bodies are seen dangling off buildings and bridges.Quite what Kate's role in this isn't clear to her - and nor is it to the viewer - until close to the end. Indeed, quite what is going on also isn't clear, although it would seem to be rather dangerous. Alejandro spends most of the time brooding around the edges of the film - he seems to have some sort of connection to Kate, but would still be willing to kill her if needed (he may be the sicario of the film's title) - and what he is there for isn't apparent until near the end. His motivations aren't really clear either, as he isn't American - he apparently used to be a prosecutor in Mexico, but has since become rather adept at violence - but they are also revealed near the end.There are some unpleasant scenes in the film, such as finding dozens of bodies in the walls of a house and some evidence of the cartel's activities, but not that much in the way of actual violence. There are a couple of gunfights and some rather more cold blooded killings, and the frequent potentiality of violence, but this isn't a violent film as such, although when there is violence it's appropriately bloody. It's often a disturbing one though, when what the cartel is willing to do to maintain its grip is shown.There is some really lovely camera work in the film, often accompanied by appropriate music, with some nice individual scenes involving the skyline, distance shots and some impressive aerial shots, but the films gives the feeling that it is trying a little too hard to be stylish and to convey some sort of message. The latter may be related to the fact that this is not really  good guys versus bad guys, as both sides are willing to use some pretty nasty tactics, but more us versus them - which probably makes it more realistic - something that Kate really isn't equipped to deal with, and she believes in the rule of law. The interactions between her and Alejandro are some of the more interesting ones in the film, but Graver seems to the stereotype of the by any means necessary CIA guy and it's unclear what purpose is served by Kate's FBI partner Reggie (Daniel Kaluuya). Overall, Sicario often looks and sounds nice but it seems rather confused when it comes to plot and story; Kate often doesn't know what's going on and nor does the audience. 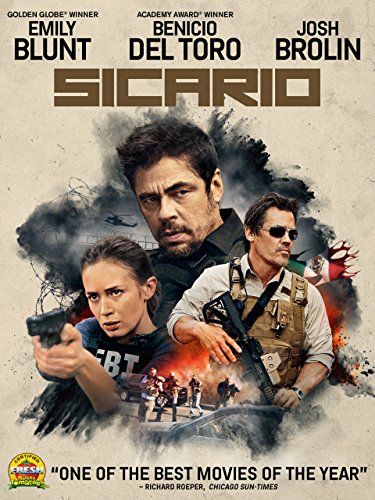