Buy Sin City: A Dame to Kill For or the original graphic novel cheaply from Amazon. You too can earn money from writing articles by signing up for InfoBarrel.
InfoBarrel is a writing platform for non-fiction, reference-based, informative content. Opinions expressed by InfoBarrel writers are their own.
InfoBarrel > Entertainment > Film > Movies

Movie Review: Sin City: A Dame to Kill For

Certificate 18, 102 minutesDirectors: Frank Miller, Robert RodriguezStars: Mickey Rourke, Jessica Alba, Josh BrolinSin City: A Dame to Kill For is the long-awaited sequel to Sin City and is partly based on Frank Miller's graphic novel of the same name. The film starts off on the outskirts of Basin City with Marv (Mickey Rourke) having killed a bunch of people, although he can't remember how or why initially, but as he tries to remember it comes back to him. Quite how Marv survived the electric chair is never explained. It then briefly introduces us to the three different story threads, which are  all loosely connected - by the strip club known as Kadie's where Nancy (Jessica Alba) dances and Senator Roark (Powers Boothe) plays poker in a back room - before concentrating on the three stories themselves.The first is that of Dwight (Josh Brolin, Guardians of the Galaxy, Men in Black 3, Sicario), a private eye who is contacted by his former lover, Ava Lord (Eva Green, Dark Shadows), asking for his help. Ava plays the femme fatale in the film, a manipulative women who uses her sexuality to get what she wants.

Credit: http://en.wikipedia.org/wiki/Sin_City:_A_Dame_to_Kill_For#mediaviewer/File:Sin-City-A-Dame-to-Kill-For-teaser-poster.jpgThe second story is that of Johnny (Joseph Gordon-Levitt, Looper, The Dark Knight Rises), a gambler who seemingly cannot lose at games of chance. He challenges Senator Roark to a game of poker in the back room of Kadie's, and it turns out the senator, the father of the Yellow Bastard in the first film, is a truly bad loser. Such a bad loser, in fact, and a dangerous psychopath, that it's a wonder that anyone wants to play poker with him.The third and final story is that of Nancy, who wants to take her revenge on Roark for the death of Hartigan (Bruce Willis), who she is still seeing around. Marv, although this time around he doesn't have a story of his own, has significant parts in both Dwight's and Nancy's stories - largely inflicting violence on a lot of people.The sequel has the same cinematic style seen in the original, where most of the film is shot in shades of grey, with the occasional thing, such as an item of clothing, blood or eyes, or the occasional person, shown in colour. Things reflect oddly; people do not seem quite human, and it is a style all of its own. The film is available in 2D and 3D, with the 2D version being the one watched.

This sequel was long awaited, but they possibly waited a bit too long to make it, as it is getting on for a decade since Sin City was released. Some of the characters from the original are in it, whilst others are not. There is an odd juxtaposition of technologies in the film; the cars are old and the train is pulled by a steam engine, but people also use mobile phones. The primary character in each story also narrates over what happens to them, as Marv did at the beginning, giving a somewhat dated feel by the style of narration and some similarities to old private eye films.Marv's appearance isn't explained - perhaps the character was too interesting to completely dispose of but Hartigan's is as, unlike Marv, he is actually dead, and Nancy is just seeing visions of him. Eva Green's character has some striking similarities to her character of Artemisia in 300: Rise of an Empire, with both being rather dangerous and yet still rather attractive. Dwight's story seemed to drag, as it took up a good chunk of the film. It possibly took up too much of the film as Johnny's was far too short. The stories, though, just don't seem to grab like they should. There is a lot of violence, even if the blood is frequently white in colour rather than red, and Ava Green seems to spend more time out of her clothes than in them. Lust and violence abound, but Sin City: A Dame to Kill For just doesn't quite seem to work as, although the style of the original is still present, the substance seems to be missing. 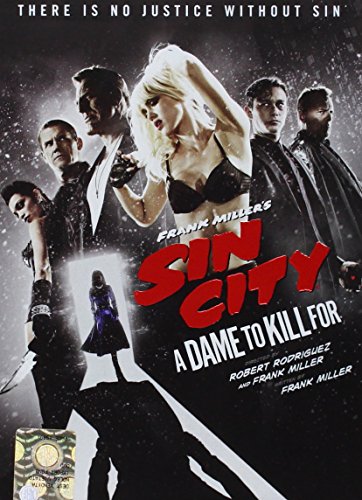