Watch Snow White and the Huntsman cheaply on Amazon, or read more articles on film and television. You too can earn money from writing articles by signing up for InfoBarrel.
InfoBarrel is a writing platform for non-fiction, reference-based, informative content. Opinions expressed by InfoBarrel writers are their own.
InfoBarrel > Entertainment > Film > Movies

Certificate 12A, 127 minutesDirector: Rupert SandersStars: Kristen Stewart, Chris Hemsworth and Charlize TheronSnow White and the Huntsman is yet another retelling of the German fairy tale Snow White as first made famous by the Brothers Grimm. This is the second film of 2012 to be based on the tale, the other one being Mirror Mirror. The film stars Kristen Stewart (American Ultra, best known for her role in the Twilight films) as the titular character.After killing Snow White's father King Magnus (Noah Huntley), the Evil Queen Ravenna (Charlize Theron, A Million Ways to Die in the West, Mad Max: Fury Road, Prometheus) imprisoned the young Snow White (Raffey Cassidy) and ruled the kingdom herself, much to the detriment of the rest of the residents. When Snow White escapes the castle where she is imprisoned, the unnamed Huntsman (Chris Hemsworth) is sent after the princess into the Dark Forest to find and recapture her and bring her back to the Evil Queen.

Credit: http://en.wikipedia.org/wiki/File:Snow_White_and_the_Huntsman_Poster.jpgRavenna's well known mirror ("Mirror, mirror, on the wall") has told her that Snow White's heart will make her truly immortal. She currently survives and stays youthful by sucking the youth out of others; Snow White's heart will remove the need for her to constantly do that.Whilst fleeing the Queen Snow White encounters seven dwarves led by Beith (Ian McShane, Cuban Fury, Hercules, Jack the Giant Slayer) whilst on her way to the castle of Duke Hammond (Vincent Regan) who, with his son William (Sam Claffin), represents the last holdout of the forces opposed to Ravenna.The best performance by far in the film is that of Charlize Theron who successfully portrays a truly evil Queen who cares little for anyone but herself and her loyal brother Finn (Sam Spruell, Taken 3). Her disillusionment with the motives of men towards beautiful women causes her to destroy them and, because she tends to seek out powerful men, usually their kingdoms too. Kristen Stewart really isn't that much of an actress in the film, although she is quite good at looking pretty which is at least something that Snow White is well known for, being "the fairest of them all." The largely Cockney geezer dwarves are something different to see and quite entertaining.This film was to some extent overshadowed by the more than somewhat notorious affair between Kristen Stewart and the (married) Rupert Sanders who directed it, which did cause problems for both of them, and the company, when it came to the sequel.Snow White and the Huntsman had a much bigger budget than Mirror Mirror (and it shows) as well as being much darker and less humorous portrayal of the tale than the latter film. It's uncertain why yet another version of this fairytale is needed, unless it does add something different, like in the television series Once Upon a Time, which this version doesn't unless the CGI is included. There are some twists to the tale but nothing major; anyone familiar with the the traditional story as it is usually portrayed will not be much surprised by this version of it. Snow White and the Huntsman is not a bad film but it isn't brilliant, although certainly better than Mirror Mirror. 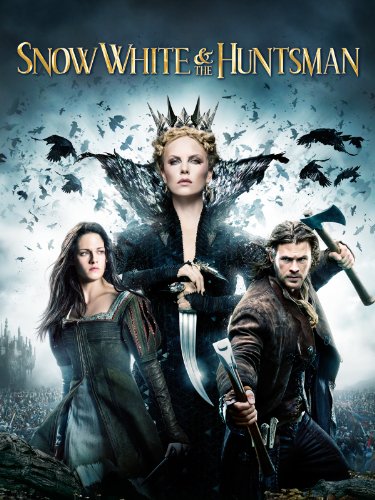