Buy Spectre or the other James Bond films cheaply from Amazon. You too can earn money from writing articles by signing up for InfoBarrel.
InfoBarrel is a writing platform for non-fiction, reference-based, informative content. Opinions expressed by InfoBarrel writers are their own.
InfoBarrel > Entertainment > Film > Movies

Certificate 12A, 148 minutesDirector: Sam MendesStars: Daniel Craig, Christoph Waltz, Léa SeydouxSpectre opens in Mexico City on the festival known as Día de Muertos, or Day of the Dead. James Bond (Daniel Craig, The Girl with the Dragon Tattoo) is hunting down a man called Marco Sciarra (Alessandro Cremona) with the intention of killing him. Sciarra and his associates are planning to blow up a stadium. In the course of his pursuit of Sciarra, Bond hears a reference to The Pale King, and comes away with a ring bearing the symbol of an octopus, although one with only seven arms.The above, quite lengthy sequence, all happens in the pre-credits sequence. When Bond gets back to London, the new M (Ralph Fiennes) is not happy with him. Bond hadn't been authorised to go to Mexico, and in the process he'd managed to blow up half a building, as well as having a fight in a helicopter above the crowded festival streets, with said helicopter frequently looking like it was going to come crashing down onto those streets.M has problems as MI6 is being merged with MI5. MI6's headquarters in London, which still bears the scars of Raoul Silva's attacks on it in Skyfall, is being demolished, and the combined agencies are going to be moved to a new building, hosting the Centre for National Security run by the youthful Max Denbigh (Andrew Scott, Swallows and Amazons, Victor Frankenstein), or "C" as Bond and M call him ("C" was the alias of Mansfield Smith-Cumming, the first director of the SIS, or Secret Intelligence Service, that organisation which is commonly called MI6). C seems fundamentally untrustworthy - of course, this could simply be because Andrew Scott played Jim Moriarty in the Sherlock television series, Holmes' nemesis.

Credit: https://en.wikipedia.org/wiki/File:Spectre_poster.jpgFollowing his actions in Mexico City, M grounds Bond, but it turns out that he was not acting entirely without orders. The previous M (Judi Dench), left a video telling Bond to find, and kill, Sciarra, and then go to his funeral. Moneypenny has some effects from Bond's parents house that have been released, including a damaged photograph and a certificate of temporary guardianship, after his parents had died. Bond recruits Q's (Ben Whishaw, Paddington) and Moneypenny's (Naomie Harris) help - although the former is less than happy about this, and heads to Sciarra's funeral in Rome, where he makes the acquaintance of the dead man's widow, Lucia (Monica Belucci), a widow who seems less than distraught by her husband's demise. After Bond saves her life, she tells him about a meeting of the organisation he belonged to.Bond attends the meeting of the organisation, which bears the same name as the film, and its mysterious head, Franz Oberhauser (Christopher Waltz, The Three Musketeers), is a face from Bond's past, one who is supposed to be dead, and one that appears well acquainted with him. Following a car chase through the streets of Rome, Bond then heads to Austria, where he meets another face from the past, Mr. White (Jesper Christensen), and from him to his daughter, Dr. Madeline Swann (Léa Seydoux), who tells him the name of the organisation he has stumbled across.Bond's pursuit of Spectre takes him to Tangier, North Africa, and finally back to London. In the background in London is the merger of MI5 and MI6, as well as the Nine Eyes agreement, which is the intended merger of the intelligence data of nine different countries, in order to stop terrorism. This is C's baby, and M isn't happy about this, or the closing down of the Double O programme. C tells M he is now obsolete. This background strand is quite important, and as a consequence of this, Moneypenny, Q and M all have rather larger roles in the film than usual.The film is action packed with the majority of the locales visited having at least one action sequence, whether it's running through the streets of Mexico City and fighting in a helicopter above them, or the car chases, one through the streets of Rome with Bond in a tricked out Aston Martin DB10 (although, because he took it without permission, not all the tricks work) and one through Austrian mountains, that involves a plane. It's fast paced enough to keep quite a lengthy film ticking over, although after a while you can start waiting for the expected action scene in whatever location Bond currently is.Oberhauser is a Bond villain of the old school, with a white Persian cat and what looks like a modern version of the Nehru jacket, a coat favoured by a number of Bond villains over the years, especially in the earlier ones. The whole film has a similar feel to many of the older films with big, megalomaniac villains, rather than the often small-time modern enemies Bond has gone up against.  There is even a hulking, mostly silent, assassin, Mr. Hinx (Dave Bautista, Guardians of the Galaxy), chasing Bond around, rather like the villain Jaws did in the old days.The organisation, Spectre, is also from the earlier Bond films, with its then head, Ernst Stavro Blofeld - although he didn't appear to start with - appearing in them, starting with the very first film, Dr. No. Blofeld, even without SPECTRE, was a recurring villain into Roger Moore's time. Whether or not the meaning of Spectre has changed isn't known, simply going by the film, as it is never referred to as anything but Spectre in this film, but it originally stood for Special Executive for Counter-Espionage, Terrorism, Revenge and Extortion. Copyright problems kept Spectre out of the films for many years,[1] but now it has returned, but will it be the recurring threat it was in the past?There are passing references to all three of Daniel Craig's prior Bond films, Casino Royale, Quantum of Solace and Skyfall, even if these references are to people who are now dead. However, these references do mean it is necessary to see those films first, otherwise why the previous M is dead and why MI6 headquarters are in ruins won't be known, nor will why Bond's personal effects needed releasing. References to villains like Mr. White, Dominic Greene or Le Chiffre also won't mean anything, nor will why a tape bearing Vesper Lynd's name should affect Bond.Even though there's a lot of action, there are also twists to the plot, mostly dealing with the events back in London, but also with Bond's own past. In particular, there are conversations between Swann and Bond about why he does what he does - kill people - which makes Bond actually think about what he's doing; a more human side to the character (Bond was originally written as quite a shallow person in many ways by Ian Fleming). The performances of the major players - and there are more than usual, thanks to the Nine Eyes plot thread - all work well, with them being pretty believable, and Waltz brings back a true, old fashioned, Bond villain with his portrayal, not one of the nonentities which the series has suffered from in later years. Whilst Spectre does not quite match Skyfall, this difference is quite negligible, and the appearance of the film is possibly even more spectacular, and it is still a gripping film that certainly doesn't seem like it's well over two hours in length. 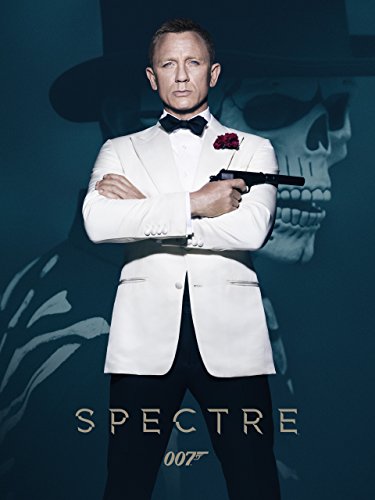