Get Taken 2 or watch the original Taken cheaply on Amazon. You too can earn money from writing articles by signing up for InfoBarrel.
InfoBarrel is a writing platform for non-fiction, reference-based, informative content. Opinions expressed by InfoBarrel writers are their own.
InfoBarrel > Entertainment > Film > Movies

Certificate 12A, 91 minutesDirector: Olivier MegatonStars: Liam Neeson, Famke Janssen and Maggie GraceTaken 2 is the sequel to Taken and again stars Liam Neeson as Bryan Mills. In Taken, Bryan rescued his daughter, Kim (Maggie Grace, Lockout), from some Albanian gangsters who were selling her, as well as lots of other young girls, into sexual slavery and prostitution. In the process of getting his daughter back all the gangsters were killed, some quite messily. It seems they all came from the same community in Albania.Murad Krasniqi (Rade Serbedzija), the father of Marko who was one of the Albanians killed in Taken (he was killed by being left connected to the mains), is seeking revenge for him and all the others killed by Bryan Mills. The fact that Marko and the others were ruining countless other people's lives and killing quite a few of them in the process is completely irrelevant to this type of person; in fact Murad seems to have problems even grasping that anyone else's feelings or opinions matter, which is a fairly sociopathic outlook.

Credit: http://en.wikipedia.org/wiki/File:Taken_2_Poster.jpgMurad sees nothing wrong with the actions of his son and the other dead Albanians, but when Mills kills and tortures them in order to rescue his daughter, that demands "justice" or rather revenge against Mills.Mills is working in Istanbul, Turkey, again as a bodyguard, and is joined by Kim and his ex-wife Lenore (Famke Janssen, Hansel & Gretel); the latter has a much bigger part in this film than the original. This is where the Albanians catch up with them take Bryan and Lenore, whilst Kim evades capture and goes on the run.This results in Bryan Mills doing what he does best, going through another bunch of Albanian gangsters mostly as if they weren't even there. He pursues them around Istanbul taking them out in hand to hand and in various gunfights.A lot of the plot is very similar to the first film, in that it was possible to deduce how close the film was to the end based on similarities between events in the two movies. There isn't anything like that great phone monologue in Taken where Bryan is talking to Marko after Marko had taken his daughter - most of said monologue being used in the trailer of the first film.As a side note, there's a bit where Kim is driving a stick shift car through Istanbul without any problems. Given that she's still learning to drive, and the prevalence of automatics in the US, this does seem a bit unlikely.Taken 2 is not a bad action film but not as good as the original. There is a lot of non-stop action but it seems to lack some of the depth, with some of the character interactions being replaced by action scenes. Could there be a Taken 3? Well, it certainly seems possible if this one does well enough, which by initial appearances it has. Taken 2 is an enjoyable bit of action by someone who also can act. 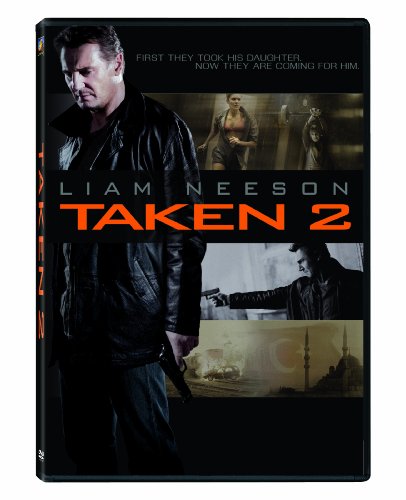