Watch Ted cheaply on Amazon, or read more articles on film and television. You too can earn money from writing articles by signing up for InfoBarrel.
InfoBarrel is a writing platform for non-fiction, reference-based, informative content. Opinions expressed by InfoBarrel writers are their own.
InfoBarrel > Entertainment > Film > Movies

Certificate 15, 106 minutesDirector: Seth MacFarlaneStars: Mark Wahlberg, Mila Kunis, Seth MacFarlaneWhen Ted starts out, it seems like a standard family story about a lonely little boy who makes a Christmas wish for his teddy bear to become a real person and whose wish comes true. The narrator (Patrick Stewart, X-Men: Days of Future Past) soon disabuses the viewer of that idea, through both his comments and his language - this comedy is very definitely not a family friendly feel good Christmas film. The teddy bear, who John decides to call Ted, soon becomes a celebrity but as the narrator says "No matter how big a splash you make in this world, whether you are Corey Feldman, Frankie Muniz, Justin Bieber or a talking teddy bear, eventually nobody gives a s***."

Credit: http://en.wikipedia.org/wiki/File:Ted_poster.jpgTwenty seven years after that wish John Bennett (Mark Wahlberg, Contraband, 2 Guns, Transformers: Age of Extinction) is living with his girlfriend Lori Collins (Mila Kunis, Jupiter Ascending, Oz the Great and Powerful). Ted (Seth McFarlane, A Million Ways to Die in the West), who has also grown up - or at least aged, even if not physically, as it's rather debateable as to whether he has actually matured - is still living with him. Ted has become a crude, foul mouthed, drinking, drug using teddy bear who is fond of women, even those you pay for, rather than a cute and cuddly one. Ted living with them is causing some friction in John and Lori's relationship. Lori feels that their relationship will never progress and John will never properly grow up as long as he still has his teddy bear, especially one who is a bad influence like Ted is. A plush toy stopping someone from growing up might not be that unusual; a walking, talking one doing the same is slightly more uncommon. This involves Ted getting a job, something he is less than please with.Ted covers John's struggles to grow up and act more responsibly in order to please the woman he loves, as well as remaining friends with Ted, his oldest friend. Ted - the teddy bear - is often hilarious, foul mouth and all. Seth MacFarlane, as well as providing the voice of Ted (and writing and directing the film), also provided the motion capture[1] for Ted's movements.There are two versions of this film, the theatrical release and an unrated version. The latter has bits that were cut from the theatrical release, so should be the one watched. Given that the unrated one is even more explicit than the theatrical release, it should probably not be watch if you are easily offended - although if that's the case, Ted should probably be avoided in its entirety. In Ted there are a number of cameo appearances by various stars as themselves, including the actor who played Ted and John's childhood hero, Flash Gordon.This is a funny film and, even if Ted isn't a cute and cuddly teddy bear, there are some scenes that are not made strictly from a comedic point of view, even though there may be comedy in them. Instead, they cover relationships, friendships and growing up. Often with a lot of swearing. Ted is a great comedy film, but probably shouldn't be watched with children - even if they will find a lot of it funny. 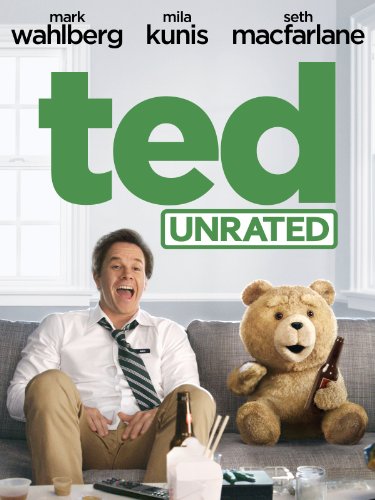