Get the Jason Bourne series from Amazon or read more articles on film and television. You too can earn money from writing articles by signing up for InfoBarrel.
InfoBarrel is a writing platform for non-fiction, reference-based, informative content. Opinions expressed by InfoBarrel writers are their own.
InfoBarrel > Entertainment > Film > Movies

Certificate 12A, 135 minutesDirector: Tony GilroyStars: Jeremy Renner, Rachel Weisz and Edward Norton The Bourne Legacy is the fourth film in the Jason Bourne series inspired by Robert Ludlum's Jason Bourne books. This film doesn't actually have Bourne appearing in it at all, although there are numerous references to him and to events in previous films, as well as a small clip featuring Pamela Landy (Joan Allen) who appeared in both The Bourne Supremacy and The Bourne Ultimatum. The events in The Bourne Legacy directly result from Bourne's actions in the latter film where he exposes the Treadstone and Blackbriar operations, and parts of The Bourne Legacy do run concurrently with events in The Bourne Ultimatum. There are also several appearances of Noah Vosen (David Strathairn), who also appeared in The Bourne Ultimatum.Treadstone and Blackbriar were only a couple of the operations of their type being run by the CIA. With their exposure to the press by Bourne, and the risk of therefore exposing the other operations to the public eye, USAF Colonel Eric Byer, Ret (Edward Norton, Birdman) is called in to close down the various programs. Closing them down requiring the death of the participants in those programs.

Credit: http://en.wikipedia.org/wiki/File:The_Bourne_Legacy_Poster.jpgAaron Cross (Jeremy Renner) is part of a program called Operation Outcome which enhances its participants abilities using pills and medication that actual alter the taker's chromosomes. Cross survives his superiors attempts to kill him in the Alaskan wilderness, as does Dr. Marta Shearing (Rachel Weisz, Oz the Great and Powerful) who is one of the scientific staff involved in Outcome. The pair are presumably the only survivors of Byer's cleanup and shut down of Operation Outcome, and after they meet up the rest of the film shows their attempts to flee from the forces chasing after them.Although there is a book, also the fourth in the series, of the same title as the film and written by Eric Van Lustbader after Ludlum's death, the film has nothing in common with the book, as the book still kept Jason Bourne as the primary character. Considering how far the three original Bourne films diverged from the original trilogy of novels, it would have been extremely difficult directly making a screenplay from the novel The Bourne Legacy. There was a fourth film originally planned still starring Matt Damon (Contagion) as Jason Bourne, but this was cancelled. Damon didn't return to star in the new fourth film after the director Paul Greengrass said he wouldn't return to direct it.Hopefully, there is a sequel to The Bourne Legacy planned, probably depending on how well the film performs, because it did seem to end abruptly in the middle of the story with plotlines as yet unresolved. Nothing appears to have been announced as yet though.This is pretty much a straight up action film. Lots of fights and gunplay, with a motorcycle chase through the streets of Manila. The Bourne Legacy is a bit weak on plot in parts, seeming to fallback onto the action sequences, although Renner works well as the new main character. It is also a bit hard in points to keep track of who is in charge of who; the Director of Central Intelligence appears to be taking instructions from a retired Navy admiral and Norton's character seems to be ordering everyone around without actual being in charge for example. 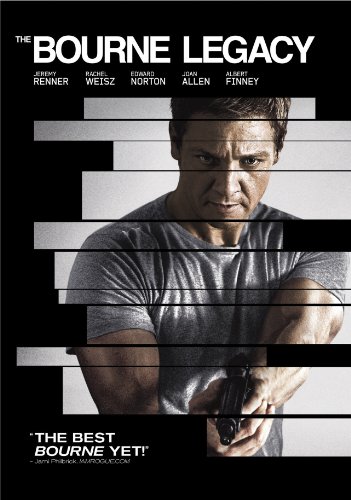