Watch The Cabin in the Woods cheaply on Amazon or read more articles on film and television. You too can earn money from writing articles by signing up for InfoBarrel.
InfoBarrel is a writing platform for non-fiction, reference-based, informative content. Opinions expressed by InfoBarrel writers are their own.
InfoBarrel > Entertainment > Film > Movies

Movie Review: The Cabin in the Woods

Certificate 15, 95 minutesDirector: Drew GoddardStars: Kristen Connolly, Chris Hemsworth and Anna HutchisonIn The Cabin in the Woods five student friend, Dana (Kristen Connolly), Curt (Chris Hemsworth), Jules (Anna Hutchison), Marty (Fran Kranz) and Holden (Jesse Williams) go and stay in a remote cabin. Now, a group of young people going to a remote cabin is not that original. Consider, for example, The Evil Dead, the film that started Sam Raimi's career which also has a group of young people staying in a remote cabin (in fact one scene in the film looks like it was influenced by The Evil Dead).Once there, they naturally come under attack by monsters; in this case zombies. The film so far seems to be a fairly stereotypical horror film, but everything is not as is seems. The friends aren't the shallow, one dimensional stereotypes so common in films of this type, although they do start acting like them - which at least some find puzzling. The cabin itself holds some secrets.

Credit: http://en.wikipedia.org/wiki/File:CitwTeaserSmall.jpgThere is, in fact, a high tech operation behind the attacks. Nearby, a large facility is coordinating things in an operation run mainly by Sitterson (Richard Jenkins) and Hadley (Bradley Whitford) with an awful lot of people providing support and security. The area of the cabin is cut off from the rest of the world by what appears to be a force field of some type. There is still another twist to the plot though, rather than the unpleasantness simply being done on the unsuspecting students by a bunch of sadists out to get their jollies. The facility's operation actually starts before the group even leave on their vacation.As well as what appears to be a nod to a scene in The Evil Dead as mentioned earlier, there is something that looks rather like the puzzle box from the Hellraiser series. Some of the other items and scenes that appear in the film could well be specific references to other films that are recognisable to those more familiar with the horror genre - and there are some parts that seem to be giving tribute to horror monsters of all types. The film, despite the sometimes enormous amounts of gore and violence displayed, does include some comedy, although it's often of a rather black nature which should come as no surprise. The vacationers sometimes survive and are able to walk away from what should be crippling attacks. The workers in the facility are an interesting contrast, as they don't behave in the way that would be expected from having watched films such as the Saw franchise. The gore itself can reach levels that border on humorous. This is an interesting twist on the horror genre, and sometimes seems to be poking fun at horror films in general and especially splatter films and those rather disturbing films that are described as "gornos."[1] The Cabin in the Woods is well worth a watch, although viewers most familiar with horror films may get more out of it. 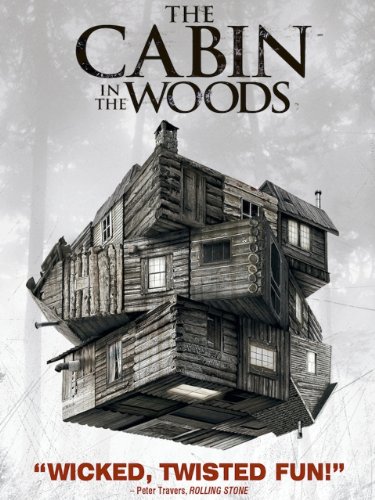 The Cabin In The WoodsAmazon Price: Buy Now(price as of Nov 4, 2013)
Not quite your normal gore-splattered horror film.
Next >> Movie Review: The Girl on the Train