Get the director's cut of The Expendables cheaply from Amazon or read more articles on film and television. You too can earn money from writing articles by signing up for InfoBarrel.
InfoBarrel is a writing platform for non-fiction, reference-based, informative content. Opinions expressed by InfoBarrel writers are their own.
InfoBarrel > Entertainment > Film > Movies

Certificate 15, 103 minutesDirector: Simon WestStars: Sylvester Stallone, Jason Statham and Jean-Claude Van DammeThe Expendables 2 is the sequel to The Expendables and features the largest collection of aging action heroes (and a few younger ones) ever seen, beating the original film by returning with some actors who were missing the first time around, as well as others getting bigger roles.Most of the cast from the original film reprise their roles; Sylvester Stallone (Escape Plan, The Expendables 3) as Barney Ross (with a moustache that really doesn't suit him), Jason Statham as Lee Christmas, Jet Li as Yin Yang, Dolph Lundgren as the somewhat demented Gunner Jensen, Terry Crews as Hale Caesar and Randy Couture as Toll Road. Bruce Willis returns as Church and Arnold Schwarzenegger (Sabotage) as Trench in his first major film role in 8 years. Both of the latter two have substantially greater parts than in the first film, as they both only really had uncredited cameos. The only person really missing is Mickey Rourke (Rourke dropped out to star in Seven Psychopaths, although he dropped out of that film also); unfortunate, as he gave one of the best performances in the original. Liam Hemsworth joins the team as Billy the Kid, a former US Army sniper.

Credit: http://en.wikipedia.org/wiki/File:The_Expendables_2_poster.jpgThere is also an appearance by Chuck Norris as Booker and Jean-Claude Van Damne stars as the villain, Vilain, in what is probably his first major film role since he made the mistake of appearing in the film Street Fighter and derailing his career just as it was starting to really take off. As an actor, though, Van Damne is probably substantially better than he was at the peak of his career. It may be this film will help reboot it.Vilain is after 5 tonnes of plutonium left over from the Cold War which he intends to sell to the highest bidder. The Expendables are there to stop him, with the aid of Maggie (Nan Yu), a specialist forced on them by Church. There isn't really that much in the way of plot beyond stopping Vilain from getting the plutonium he is after; the rest of the film revolves around the Expendables blowing stuff up and killing unfeasibly large numbers of bad guys without getting scratched themselves - a throwback to some of the films that made some of the major stars great in the first place.There are a fair few somewhat tongue in cheek references to some of their previous films and catchphrases of Willis, Schwarzenegger and Stallone. There's even a reference to the Chuck Norris facts internet meme when Booker describes what happened when Booker was bitten by a cobra (this one is actually online). Unfortunately, some of these references did detract a bit from the film, if you recognised them, as they were a distraction.The Expendables 2 is not a totally serious film; a lot of the action isn't that realistic but there is an awful lot of it though, with plenty of guns, explosions, fighting and blood - although the bloodletting has more in common with that from 300 than anything else. The Expendables 2 is worth a watch if you want to see a lot of action without having to think too much. The Expendables was probably a better film though. 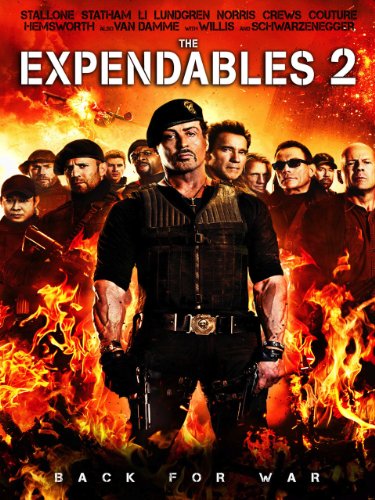