Buy The Guest cheaply from Amazon. You too can earn money from writing articles by signing up for InfoBarrel.
InfoBarrel is a writing platform for non-fiction, reference-based, informative content. Opinions expressed by InfoBarrel writers are their own.
InfoBarrel > Entertainment > Film > Movies

Certificate 15, 99 minutesDirector: Adam WingardStars: Dan Stevens, Sheila Kelley, Maika MonroeIn The Guest, a young man, David (Dan Stevens, A Walk Among the Tombstones, Night at the Museum: Secret of the Tomb), arrives on the doorstep of the Petersons's house. David says that he was a friend of their eldest son, Caleb, who was a soldier in the US Army and was killed, although it isn't specified where. David says that he had promised to Caleb, as the latter was dying, that he would visit his family to check on them and tell them all that Caleb loved them. David came as soon as he was able to, as he was wounded and has only just been discharged from the army.Mrs Peterson (Sheila Kelley) is delighted to meet him and invites him to stay. Initially, David demurs, but is talked into it. The rest of the family have varying reactions. The father, Spencer (Leland Orser), is initially not keen but quickly comes around and tells David to stay whilst he gets himself sorted out. The daughter, Anna (Maika Monroe, The 5th Wave), is more wary, but also changes her opinion. With the younger son, Luke (Brendan Meyer), it's harder to tell what is true opinion is, at least initially, but he seems to think the highest of David of them all.

Credit: http://en.wikipedia.org/wiki/The_Guest_%28film%29#mediaviewer/File:The_Guest_Film_Poster.jpgDavid is a pleasant, quietly spoken and extremely polite young man - "Sir" and "Ma'am" to everyone - who seems to have a generally cheerful outlook, although there is the occasional sign that he may have some sort of problems from his facial expressions before there is anything to back that up. He is helpful and generally nice to have around. The first instance occurs when Luke is being bullied at school (in the sort of way that results in kids deciding to shoot up their school). David asks who they are and, when Luke asks what he's going to do, he says "Nothing bad." Which is probably just a little inaccurate, as he treats them rather violently. David's abilities seem superior to that of a regular soldier and, indeed, it seems that his background may have been a little more special.Trouble arises when Anna decides to check up on David's military background. An inquiry at the base he said he was stationed at brings back the reply that David is apparently dead. This also triggers a flag which results in heavily armed men turning up at the door in what seems like an overly over the top response. And this is where the film loses its' way.Up until this point, The Guest has seemed like a decent thriller. David, although outwardly pleasant, and apparently genuinely trying to help the Petersons, seems to have a darker side. His attempts to help are sometimes rather extreme, even if they are not seen on screen, and some actions that are seen show his violent side. However, at this point, the film changes. It gives the impression that the creators didn't actually know where they wanted to go with the story from here on, so decided to cover this lack up with violence and guns. Lots of violence and lots of guns. David, for reasons which are, fortunately, at least somewhat explained, goes a bit off the rails, but this does mean the last part of the film is no longer a thriller about someone who you are sure is not what they seem, but is instead an action film.This is a reasonable film, but it could have been a great one. The music is an odd choice, but somewhat fitting, and blends well. Often, it's being listened to in the film, and isn't merely the soundtrack. The character of David is interesting, and quite charming, at least to start with. It's the end that lets the film down. In the latter part of the film, it just didn't seem to know what it wanted to be. There even seem to be references to some of the old 80s slasher serial killers, especially as the events are taking place during Halloween. The Guest could have, and should have, been better, as the cast seems to have been let down by a shaky conclusion. 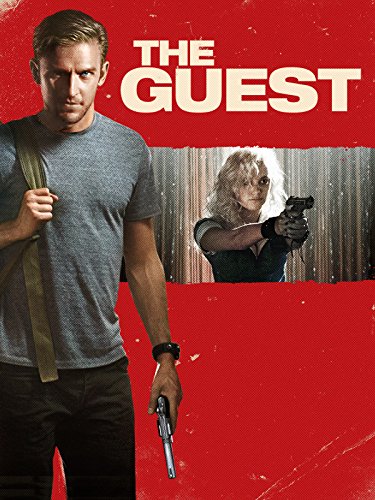