Buy The Intern cheaply from Amazon. You too can earn money from writing articles by signing up for InfoBarrel.
InfoBarrel is a writing platform for non-fiction, reference-based, informative content. Opinions expressed by InfoBarrel writers are their own.
InfoBarrel > Entertainment > Film > Movies

Certificate 12A, 121 minutesDirector: Nancy MeyersStars: Robert De Niro, Anne Hathaway, Rene RussoIn The Intern Ben Needham (Robert De Niro) is 70, is retired, and has been widowed for three and a half years. Since his retirement he's done lots of different hobbies, used his air miles to travel to other countries, all to keep himself busy. Ben has also had to attend a lot of funerals as, given his age, people he knows die quite often. If Ben has a root problem, it's boredom and having nothing to do with his life. His son and his family in San Diego, and he does visit them, but Ben wants something else to do with his life.Ben has lived in Brooklyn all his life and wants something new when spots a flyer for an ecommerce company called About the Fit which is based in Brooklyn. About the Fit is about selling fashions that fit to women. It is a comparatively new company, having only been around for a year and a half, but it already has 220 employees. The idea was to have a senior intern programme and recruit people over 60. The initial application needs to be done by uploading either YouTube or Vimeo video about themselves - and a point is made that this is not necessarily the easiest concept to grasp, as Ben has apparently had to get help from his nine year old grandchild.

Credit: https://en.wikipedia.org/wiki/File:The_Intern_Poster.jpgOnce the video is done, Ben is called in for a number of interviews, which he passes quite easily, with a few funny bits in them. One typical ecommerce start-up question is "Where do you see yourself in 10 years?", something that is rather less relevant to someone who is 70, as the twenty-something interviewer realises.Jules Ostin (Anne Hathaway, Interstellar, The Dark Knight Rises) is the company CEO and founder. Since it was first discussed, she has forgotten about the senior intern programme - she is extremely busy juggling many different things at the same time, including her home life with her daughter and stay-at-home husband (although that is not the approved term) Matt (Anders Holm). Because Jules is the founder, she has is told to take on a senior intern herself to create the right impressions so, of course, she gets assigned Ben as her intern.Jules isn't keen on the idea, so she initially doesn't give Ben much to do. The other employees all like him, and get involved with him as he helps them out, even though he is at least double and, quite probably in some cases, treble their ages, all except for the in-house masseuse Fiona (Rene Russo, Nightcrawler), who Ben is attracted to.Jules is being pressured by her investors to take on a new Chief Executive Officer, as the company has grown so fast and done so well that there are fears that it will grow too quickly and not be able to maintain itself - a fear that seems possible, given how run off her feet she is. A new CEO would be Jules' boss, and she isn't overjoyed with the idea to say the least; for one thing, she's worried that an outsider will quickly destroy the values of the company - a fear that is certainly a justifiable one and, having set up and run her own, successful, company, she isn't enthralled about becoming simply someone working for a boss again.This is a hard film to classify as to what it is. It isn't a romantic comedy - there are comedic elements, and there are comedic ones, but the romantic elements aren't centre stage, and the comedic ones often present some of the films more serious notions in a lighter form. There is, of course, comedy from the age difference, and different live experiences. Ben's previous professional career was in the printing of phone books, a concept that the younger staff have a bit of a problem grasping - the concept of the phone book that is and that people really did use them. They also don't always grasp that just because someone's old doesn't mean they can't remember everything. However, his colleagues all get along with Ben as he provides an older, wiser figure for them to turn to, as he helps them and even gives relationship advice.The chemistry between the two lead characters is good, and there are a host of minor characters in the film, from Jules' overworked assistant Becky (Christina Scherer) to Ben's fellow, and normally aged, intern colleague Davis (Zack Pearlman). Enough time is spent on these characters that they do become fairly real, even if their roles are often quite minor, and you become interested in them. The relationship between Jules and Ben does progress in the sort of way you would expect, as she comes to both accept and like him, changing from her initial utter lack of interest in the concept of a senior intern. Whilst that change in the relationship is expected, and the one between Fiona and Ben also is, a lot of the film doesn't actually turn out the way you would think.Underpinning the film is a more serious message. Jules is the founder of an extremely successful internet company, and she's female, which has created problems. Her husband is fulfilling the typical stay at home role, which has put a strain on their relationship There's also the feeling that she doesn't get as much respect because she's a woman; perhaps the fact that she's a woman is why the investors want an outside CEO - and all the candidates mentioned are male - and some of the prospective CEOs, even though none are ever seen, by the sounds of it don't respect her abilities because of her gender. Although this is quite a lengthy film, it doesn't feel like a long one. The story keeps on ticking over and the interactions between the various characters are interesting, and sometimes funny. The Intern is an enjoyable film regarding the juxtaposition of two different worlds, and how people are still people, as well as the problems that can be faced by a successful woman in business. 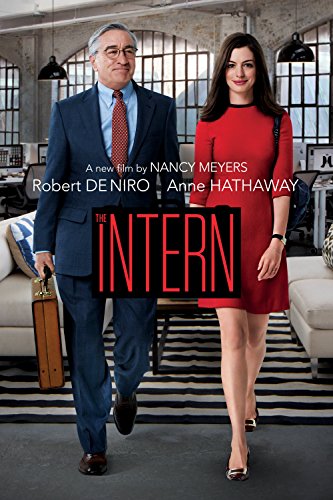