Get The Last Stand cheaply from Amazon. You too can earn money from writing articles by signing up for InfoBarrel.
InfoBarrel is a writing platform for non-fiction, reference-based, informative content. Opinions expressed by InfoBarrel writers are their own.
InfoBarrel > Entertainment > Film > Movies

Certificate 15, 107 minutesDirector: Jee-Woon KimStars: Arnold Schwarzenegger, Forest Whitaker, Johnny KnoxvilleThe Last Stand starts off with drug lord Gabriel Cortez (Eduardo Noriega) in FBI custody. He is being transported through Las Vegas to a maximum security prison in a convoy headed by John Bannister (Forest Whitaker, Taken 3) when it gets ambushed by the cartel. During the attack, Cortez escapes, taking one of the FBI agents, Ellen Richards (Génesis Rodríguez), hostage. Cortex then takes her in a previously stolen modified Chevrolet Corvette C6 ZR1 and heads south for the Mexican border, with the FBI in pursuit.Ray Owens (Arnold Schwarzenegger) is a former LAPD detective and now sheriff of the small town of Summerton Junction in Arizona, close to the Mexico border. Most of the town has headed out to go and watch an American football game in which the town's school is participating leaving it largely, and fortunately, deserted, with only a handful of people remaining behind.

Credit: https://en.wikipedia.org/wiki/The_Last_Stand_%282013_film%29#/media/File:Last_Stand_2013.jpgAn advance team of troops led by Burrell (Peter Stormare, Hansel & Gretel: Witch Hunters) is sent to Summerton Junction to secure the area where the crossing will be made, and to construct the crossing itself because, although the town is close to the Mexican border, there isn't actually a way across it for a car at this point. The FBI meanwhile initially believe that Cortez is heading for one of the regular border checkpoints; when they realise otherwise Agent Bannister contacts Sheriff Owens, initially showing the rather stereotypical FBI disdain for local law enforcement.Ray decides to stop Cortez, rather than just letting him pass through the town on the way to the border, even though all he has are a couple of deputies, a military veteran, Frank Martinez (Rodrigo Santoro, 300: Rise of an Empire, Focus), currently locked up in the town jail and suffering from PTSD and the rather erratic Lewis Dinkum (Johnny Knoxville, Teenage Mutant Ninja Turtles), who runs a "museum" whose sole purpose is as an excuse to legally collect guns, in which there is a very extensive collection of firearms dating back to World War II.The Last Stand was Schwarzenegger's first lead role in a decade, and in many ways the film is like watching an action film from the 80s, back in his heyday. There is not a whole lot of logic to the film - Cortez heading for the border in a souped up car does not seem to be the most intelligent action this supposedly intelligent criminal could be doing, even though an explanation is given for this behaviour. The car never seems to need to refuel either (which, given that the engine apparently has 1,000 horsepower, is something it would certainly need to do). Many of the characters are in fact caricatures and rather one dimensional at best; Dinkum fulfils the old role of the comedy sidekick (something one of Schwarzenegger's own films poked fun at back in the day) and there really is not much in the way of acting by anyone.This is very definitely an old-style action film - lots of guns, lots of action, a bit more gore than there would have been in the past, as you can get more past a 15 certificate than you could have in the 80s, and elements of humour, including some tongue-in-cheek references to Schwarzenegger's status as an aging action star, including himself saying that he feels "old" and Cortez calling him "old man." The Last Stand is certainly not as intelligent as some of the more modern films, which depend more on elements other than muscles and guns, but it's perfectly watchable if you are feeling nostalgic for how action films used to be. 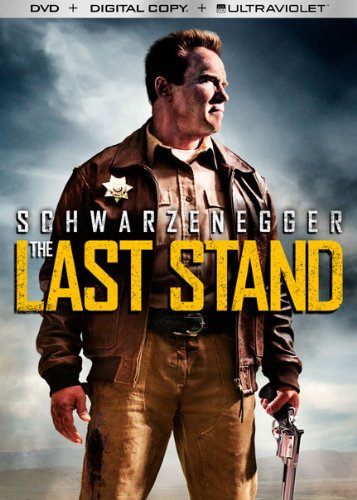