Get the original TV series or the 2015 film, The Man From U.N.C.L.E. from Amazon. You too can earn money from writing articles by signing up for InfoBarrel.
InfoBarrel is a writing platform for non-fiction, reference-based, informative content. Opinions expressed by InfoBarrel writers are their own.
InfoBarrel > Entertainment > Film > Movies

Movie Review: The Man from U.N.C.L.E.

Certificate 12A, 116 minutesDirector: Guy RitchieStars: Henry Cavill, Armie Hammer, Alicia VikanderThe Man from U.N.C.L.E. opens in Berlin in 1963, with former U.S. Army serviceman turned criminal, and now the CIA's best agent, Napoleon Solo (Henry Cavill, Batman v Superman: Dawn of Justice, Man of Steel, The Cold Light of Day), is making his way from West Berlin to Soviet East Berlin. He's looking for Gaby Teller (Alicia Vikander, Ex Machina, Jason Bourne), in order to bring her over to the west. Gaby's father, who she hasn't seen in the best part of two decades, a former Nazi Germany rocket scientist (although it's carefully stated that he was an unwilling participant, and was never actually a Nazi himself), went to the United States at the end of World War II (perhaps as part of Operation Paperclip, although it isn't specified), has now gone missing, and he's being desperately sought, as he would appear to have a method of greatly simplifying the process of enriching uranium to use in atomic weapons. The exit from east to West Berlin results in a car chase as a KGB agent, Ilya Kuryakin (Armie Hammer, Mirror, Mirror, The Social Network), tried to stop the pair from escaping.Following the successful escape, both Solo and Kuryakin are made to team up by their respective superiors. Teller has been taken by an Italian shipping company that has ties to escaped Nazis, and Gaby's uncle, Rudi (Sylvester Groth), works for the company (something that no-one seems to think might possibly be odd). It seems that the shipping company is building their very own nuclear device, which they are going to give to the Nazis. The company is owned by the eminently forgettable Alexander Vinciguerra (Luca Calvani), but the real power behind the company is his wife, Victoria (Elizabeth Debicki). Gaby and Ilya pose as an engaged couple in order to get to see Rudi, whilst Solo poses as an art thief in order to get close to Victoria, and the three head to Italy.

Credit: https://en.wikipedia.org/wiki/The_Man_from_U.N.C.L.E._%28film%29#/media/File:The_Man_from_U.N.C.L.E._poster.jpgNeither Kuryakin nor Solo take an instant shine to each other - after all, they are on opposing sides, and this was at the height of the Cold War, when it came very close to turning hot, and their first meeting was a confrontation. Much of their discourse and interaction, at least initially, involves a constant game of one-upmanship, and putting down their new "partner." Secret, and identical, orders from their respective bosses don't exactly help matters.The film is based on the classic 60s television series of the same name, although it's not so much about the men from U.N.C.L.E.; rather it's about them before they became The Man from U.N.C.L.E. The acronym itself isn't actually used until the very end of the film, and its meaning is shown in the end credits. This film functions more as a prequel to the series, than as an adaptation, although it seems likely that sequels are intended, should it be successful. There do seem to be differences from the original series; mainly with Ilya Kuryakin, who is portrayed more as a borderline psychotic thug than anything else, although this does provide a nice contrast to the rather more suave, sophisticacted and better-dressed Napoleon Solo. The interaction between the two, and between Ilya and Gaby, do make up a good part of the film's appeal. The general feel does in many ways, though, resemble what you would have seen in the original series, and in spy movies in general, from the Sixties.The occasional and repeated appearance of Mr Waverley (Hugh Grant, The Rewrite) may not mean much to anyone who hasn't seen the original series, for his role doesn't become truly apparent until near the end, but those who are familiar with it will have rather more of a clue. The incidental details in the film seem at least fairly accurate; there are actual news broadcasts from that era shown on television and the fashions and technology looks accurate - and if it isn't, it would require more knowledge than the average viewer is likely to possess.The plot itself is fairly standard, practically James Bond-like in its origin (admittedly, Bond's creator, Ian Fleming, also helped create the original series) with a criminal organisation of ex-Nazis on the brink of getting hold of their very own nuclear weapon. Of the two main bad guys, Alexander is, as mentioned, eminently forgettable - he really doesn't seem to have much of a purpose at all in the film, even when he's actually on screen. Victoria, on the other hand, is an excellent portrayal of the more ruthless, and seductive, femme fatales (sometimes literally fatal) that were seen in media during that era. The Man from U.N.C.L.E. is not a bad film, but it just seems to lack that extra something to make it great - perhaps a better plot, as the characters are otherwise pretty decent. 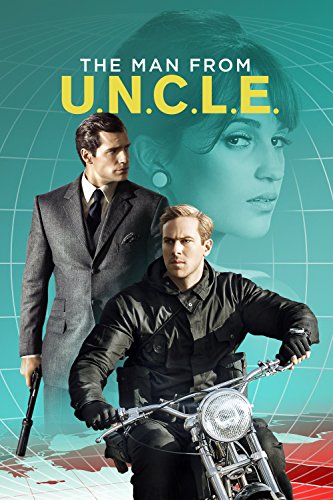