Buy The Purge cheaply on Amazon or read more articles on film and television. You too can earn money from writing articles by signing up for InfoBarrel.
InfoBarrel is a writing platform for non-fiction, reference-based, informative content. Opinions expressed by InfoBarrel writers are their own.
InfoBarrel > Entertainment > Film > Movies

Certificate 15, 85 minutesDirector: James DeMonacoStars: Ethan Hawke, Lena Headey, Max BurkholderThe Purge is set in the United States in the year 2022. The country at the time seems to be in good shape. Unemployment is under 1% and crime is at an all time low. This all came at a price though. After years of recession, unemployment and widespread problems with the country, a government  called the "New Founding Fathers" was elected. This government, which seems vaguely "religious," introduced something called "The Annual Purge."The Purge happens between every year between 7PM on the 21st March and 7AM on the 22nd March. During this 12 hour period, police, fire and emergency medical services are all suspended. This time slot allows people to "purge" their systems and release their aggression, because during the Purge nothing is illegal. You can do anything you want, using weapons described as level 4 or lower - which does include assault rifles - to almost anyone. "Almost" anyone because government officials above a certain level are immune - the creators of the Purge ensuring they wouldn't be subjected to it. Some use this as an excuse settle scores or works out grudges, others wait it out but the most dangerous group goes off and has "fun" - which generally involves slaughtering anyone less fortunate. During the hours of the Purge, the rich either lock themselves up behind thick metal shutters, or go out hunting and killing. The poor and the homeless mostly die.

Credit: http://en.wikipedia.org/wiki/File:The_Purge_poster.jpgJames Sandin (Ethan Hawke) sells security systems to the wealthy, and consequently is wealthy himself. He lives in a rich community with his wife Mary (Lena Headey, 300: Rise of an Empire, Dredd), daughter Zoey (Adelaide Kane) and son Charlie (Max Burkholder). James and Mary don't go out killing themselves, instead staying locked behind their security system.When Charlie sees a bloody stranger (Edwin Hodge) begging for someone to help him on their house's security system, he lets him into the house. The stranger was being hunted by a group who wanted to kill him, believing it was their right to do so and that his only right was to die. The leader of the group (Rhys Wakefield) gives the Sandins one hour to send their rightful prey out, alive, or they will come in after him and kill everyone. James Sandin knows that, although the security system he sells is good, it will not keep out a group really determined to break in - which these are.The Purge is a pretty violent movie. It's also a fairly typical siege film - a small group in a building are being attacked by a much larger group. What this film brings that is a bit different is the political background to the events - the Sandins aren't under siege by criminals, murderers or deranged serial killers but instead what are normally, on every other day of the year, law abiding, honest citizens. It is also quite disturbing, and probably going by past events quite realistic, how quickly and in how few years people who would not have been brought up to do or even done for the majority of their life random acts of violence against others would end up believing this is normal and right behaviour, and is in fact their prerogative. The Purge is overall a disturbing, violent film of a not too distant future which, for 12 hours every year, descends into bloody violence, mayhem and anarchy. 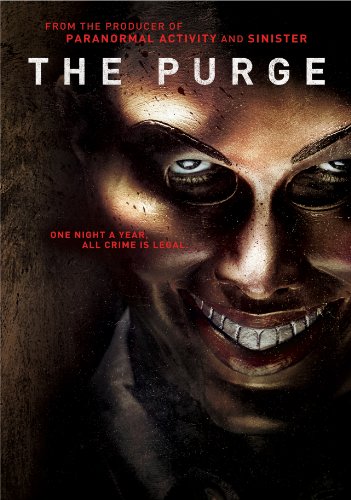