Buy The Social Network from Amazon or read more articles on film and television. You too can earn money from writing articles by signing up for InfoBarrel.
InfoBarrel is a writing platform for non-fiction, reference-based, informative content. Opinions expressed by InfoBarrel writers are their own.
InfoBarrel > Entertainment > Film > Movies

Certificate 12A, 120 minutesDirector: David FincherStars: Jesse Eisenberg, Andrew Garfield and Justin TimberlakeThe Social Network is the story of Facebook from its' creation in Mark Zuckerberg's (Jesse Eisenberg, American Ultra, Now You See Me, Zombieland) dorm room at Harvard in 2004. Together with his best friend at the time Eduardo Saverin (Andrew Garfield, The Amazing Spider-Man, The Amazing Spider-Man 2) who fronted much of the original investment, together with Zuckerberg's room mates Dustin Moskovitz (Joseph Mazzello) and Chris Hughes (Patrick Mapel). The film doesn't cover the entire history of Facebook, only telling the bits from just prior to its founding as thefacebook.com and for about the first year afterwards.The film itself is told in retrospect, mostly from the points of view of Zuckerberg and Saverin although occasionally parts are told from the points of the Winklevoss brothers and Sean Parker., during two court cases that are being fought; the first between Cameron Winklevoss (Armie Hammer, Mirror Mirror), Tyler Winklevoss (Armie Hammer, The Man From U.N.C.L.E., and Josh Pence), and Divya Narendra (Max Minghella, Horns, The Internship), three Harvard students who claimed that Zuckerberg stole the idea for Facebook from them whilst he was supposed to be working on their own similar project, HarvardConnection.com (later called ConnectU).

Credit: http://en.wikipedia.org/wiki/File:Social_network_film_poster.jpgThe second lawsuit was with Zuckerberg's former friend, Eduardo Saverin, Facebook's initial Chief Financial Officer (CFO) and business manager, who felt he had been forced out of Facebook, at least partly because of the influence of Sean Parker (Justin Timberlake, Bad Teacher, In Time, Runner, Runner) a co-founder of Napster who became interested in Facebook and was its first president.Neither Zuckerberg nor Parker come across in the film as particularly likeable, although in Zuckerberg's case this appears to be mostly unintentional and down more to an inability to focus or pay attention to things that don't interest him as well as being a ner who is socially awkward. Sean Parker comes across as a bit of an arrogant, not very pleasant jerk.The Social Network is based on the book The Accidental Millionaires by Ben Mezrich. As with any film based on real life events, it's hard to know just how much is true and how much has been altered to make a better story. Although Eduardo Saverin consulted for the book, none of the people in the film or who worked for Facebook were involved in the film and Zuckerberg, amongst others, were critical of the film for having many inaccuracies. Jeff Jarvis who authored the book Public Parts after an interview with Zuckerberg stated that Aaron Sorkin, who wrote the screenplay, made up too much of the story[1].Although The Social Network is quite an enjoyable film it is spoiled by what do appear to be factual inaccuracies. Mark Zuckerberg in particular seems to be portrayed as a much crueller person than he actually is, according to a number of interviews, where it was stated he would never have behaved in the way he is shown to have in the film. This is always the problem with films based on true stories; many adjustments may be made to make it seem more interesting at the expense of telling the truth.[2] 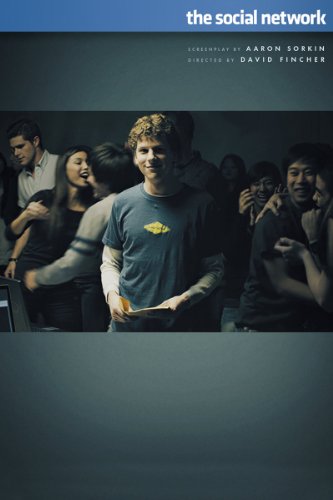