Buy The Watch cheaply from Amazon or read more articles on film and television. You too can earn money from writing articles by signing up for InfoBarrel.
InfoBarrel is a writing platform for non-fiction, reference-based, informative content. Opinions expressed by InfoBarrel writers are their own.
InfoBarrel > Entertainment > Film > Movies

Certificate 15, 102 minutesDirector: Akiva SchafferStars: Ben Stiller, Vince Vaughn, Jonah HillIn The Watch Ben Stiller (Night at the Museum: Secret of the Tomb) is Evan, a man very involved in his local community of Glenview, the manager of his local Costco (a real company as it turns out, something that may not be known to people not from the US, and the film drew criticism from the sheer amount of mentions and screen space taken up by the company) and the sort of uptight person who could easily become very annoying. After a murder and some televised comments from Sergeant Bressman (Will Forte) of the local police regarding the murder, he decides to form a Neighbourhood Watch in order to catch the killer.

Credit: http://en.wikipedia.org/wiki/File:The_watch_movie_poster.jpgThe initial take up is rather disappointing, and the three members who do join may not be the type of people Evan was hoping for. The most promising is construction engineer Bob (Vince Vaughn, The Internship, Unfinished Business) who seems to have no ulterior motives for joining, although he doesn't approach it with the level of seriousness that Evan would like. A more disappointing recruit is Jamarcus (Richard Ayoade), a British man and recent divorcee who seems to be joining in the hope of getting some action. The most worrying recruit is Franklin (Jonah Hill), a gun nut who wanted to join the police but failed the written, physical and mental health tests to do so, and is the sort of person you would expect him to be. The new Watch is is not received well or taken seriously by Sergeant Bressman, even though he commented that local citizens should become more involved in community policing.The watch starts patrolling the neighbourhood although they don't do that well at it, getting little respect from the community. It turns out that the small town of Glenview is actually ground zero for an alien invasion, and the only line of defence against it are the four members of the new and less than totally professional Neighbourhood Watch. Although the group initially deals with this as unprofessionally as they have handled everything else so far, the members of the watch finally arm up, courtesy of Franklin's gun collection, and take on the aliens in order to stop the invasion. Much destruction ensues.The Watch possibly received a higher certification than the makers desired. A 15 certificate is pretty high for this type of film and could be why it was not very successful commercially - the crudeness and foul language may have caused problems here and resulted in less people being able to actually go and see it. Although the cast members perform their roles well, the script suffers from a meaningless excess of crudity and foul language - it simply doesn't add anything to the film and isn't presented in such a way as to make it really funny. Overall, The Watch is a bit of a disappointment as it could have been - and certainly had the talent in both actors and writers to be - better. 2.5/5. 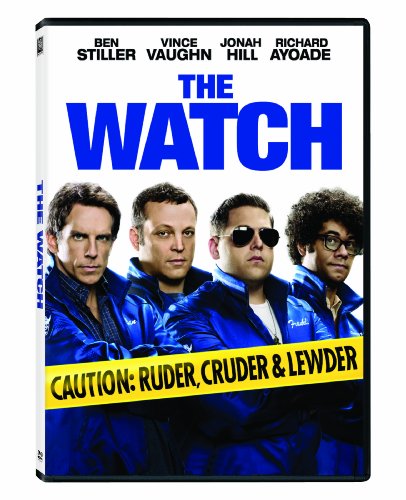