Buy The Wedding Ringer from Amazon. You too can earn money from writing articles by signing up for InfoBarrel.
InfoBarrel is a writing platform for non-fiction, reference-based, informative content. Opinions expressed by InfoBarrel writers are their own.
InfoBarrel > Entertainment > Film > Movies

Certificate 15, 101 minutesDirector: Jeremy GarelickStars: Kevin Hart, Josh Gad, Kaley Cuoco-SweetingIn The Wedding Ringer, Doug Harris (Josh Gad, Pixels, The Angry Birds Movie) is getting married in only a couple of weeks. He, and his bride-to-be, Gretchen (Kaley Cuoco-Sweeting), are in the last stages of planning their wedding. Doug has a major problem, though - he can't get a best man. He has no male friends to fill in the role, and the people he calls up for help are barely acquaintances at best and have no interest. Even worse, not only does he not have a best man or any groomsmen, Doug has made out that he does. He has a list of seven groomsmen, plus best man, including names and jobs, but it's entirely made up. Doug doesn't want to blow his wedding, as he can't believe a girl like Gretchen has chosen a guy like him to marry, and the stress of the situation is making him ill.

Credit: https://en.wikipedia.org/wiki/The_Wedding_Ringer#mediaviewer/File:TheWeddingRingerPoster.jpgEnter Jimmy Callahan (Kevin Hart, Central Intelligence, Get Hard, Ride Along 2). Jimmy runs a company called TBM, Inc. - The Best Man, Inc. - which provides best man and groomsmen service to grooms who are lacking in suitable male friends, and he has an entire gallery of photographs showing him at various weddings. TBM, Inc. has a whole range of different packages depending on what the groom needs. Doug's case is rather extreme, though. Jimmy says that the package is The Golden Tux, and he's never done one before. In fact, it's so complicated he doesn't think it can be done. He is "talked" into doing it by Doug, though - for $50,000 plus expenses.Jimmy's relationship with his clients is purely a business one. Although he may pretend to be the groom's bet friend, they are not friends, and the relationship will terminate once the wedding is done - though grooms who spend enough will also get an appearance at their funeral, should the worst happen. What the wife thinks when the supposed best friend is never seen again is not covered, although a plan is come up with to "dispose" of Doug's best friend once his role is done.With so little time left until the wedding, Jimmy - now known as best man Bic Mitchum - recruits seven other groomsmen, some he already knew, others who had to audition for the part. A more unlikely, and sometimes disturbing, bunch of people would be hard to imagine. Jimmy plans things meticulously, down to staging photos showing Doug and his "friends" doing various, often extreme, activities. Jimmy also teaches Doug how to respond to various situations that may crop up, because Doug is still extremely nervous about the whole thing. Not only does Jimmy arrange the entire groomsmen plan, he also throws Doug a bachelor party, something that Doug was not intending to do, as he and Gretchen decided not to do so.The fast talking, if occasionally foul mouthed, Kevin Hart works well as the purchasable best man, Jimmy, and Josh Gad is certainly believable as the nice guy who has somehow managed to hook the hot girl (fans of The Big Bang Theory may see similarities there). The Wedding Ringer is, mostly, about the relationship between Jimmy and Doug, rather than anyone else. This relationship progresses as the film does; it may be a purely business relationship between the two, but they do seem to actually like each other - developing a "bromance". Sure, there are other characters, but many of these are simply backdrops or, in the case of the groomsmen, actually disturbing (when Doug says "It looks like the entire cast of Goonies grew up and became rapists" he isn't kidding). The most interesting is probably Jimmy's interactions with Gretchen's sister, Alison (Olivia Thirlby, Dredd). There is a fair bit of humour in the film, some of it rather crude, but not as much as might be expected from the certification. Other parts make you want to cringe.Films about weddings are hardly unusual. Films about weddings from the point of view of the groom are substantially more uncommon. There may well be other men who are in Doug's situation who, thanks to his earlier life, never really got close to anyone and are, when a wedding arrives, lacking in male friends to accompany them. This makes a nice, different twist to the wedding film genre, and is in many ways fairly believable. If Doug and Jimmy hadn't worked well together - and they do - this film would have been a whole lot worse. There are twists to the story too, and, although there is a point in the film when it becomes pretty obvious what the twist is going to be, you can actually spot it coming from an earlier interaction. The Wedding Ringer is a funny, sometimes crude, about a man in a difficult situation who is helped out for a price by a total stranger - but it becomes more than just that. 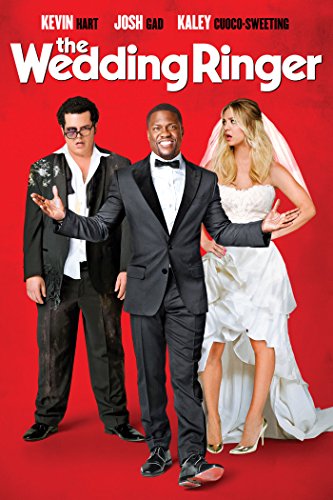