Get The Woman in Black from Amazon or read more articles on film and television. You too can earn money from writing articles by signing up for InfoBarrel.
InfoBarrel is a writing platform for non-fiction, reference-based, informative content. Opinions expressed by InfoBarrel writers are their own.
InfoBarrel > Entertainment > Film > Movies

Movie Review: The Woman in Black

Certificate 12A, 95 minutesDirector: James WatkinsStars: Daniel Radcliffe, Janet McTeer and Ciarán HindsThe Woman in Black is based on a book of the same name by Susan Hill. It has also been adapted for radio, television and the stage. The film stars Daniel Radcliffe (Horns, Victor Frankenstein), best known for playing Harry Potter, as Arthur Kipps, a solicitor from London sent to a seaside village to sort out the estate and paperwork of the recently deceased owner of Eel Marsh House, the widow Alice Drablow, and try to arrange a buyer for it, a nearby manor which is reached from the mainland by a causeway that is covered by the tide.

Credit: http://en.wikipedia.org/wiki/File:Woman_in_black_ver4.jpgArthur has suffered personal a loss which has affected his work and this is his last chance to keep his job, and therefore be able to provide for his young son. His boss has been tolerant until now, but needs Arthur to get on with his job.Arthur meets local Sam Daily (Ciarán Hinds, Miami Vice, Tinker, Tailor, Soldier, Spy, Ghost Rider: Spirit of Vengeance) on the train to the village who befriends him and wishes him luck in selling the house because he won't find anyone local willing to buy it. The house has an bad reputation locally. Soon, Arthur starts seeing things that aren't there at the house. The entire village seems to be haunted, especially Eel Marsh House.With the exception of Sam and Sam's wife Elisabeth (Janet McTeer) Arthur gets a reception that is at best chilly and at worst actively hostile from the rest of the village who want him gone, feeling he is just stirring up things best left alone with his presence at such an ill-omened house.It appears that an unusually high number of children in the village have died in accidents and through misadventure over the years, including Sam's own son Nicholas. Their deaths were presaged by the appearance of a mysterious woman, the woman in black, who Arthur catches glimpses of at the house as well as in the village itself. Whoever the woman is, she seems to hold a grudge regarding a death that happened in the past.The Woman in Black isn't a gory horror film like so many these days. Instead it relies on things mostly just glimpsed, poorly-lit places - Eel Marsh House is mostly lit by candles -  and ominous sounds and music to set the scene. It is definitely a horror film though. It's produced by a revived Hammer Film Productions, a UK film company most famous for their Gothic horror films of years ago.Daniel Radcliffe plays a good part as Arthur Kipps, a somewhat different role to the Harry Potter part he is best known for , which may be a deliberate act on his part to prevent future typecasting. The majority of the film revolves around Arthur, with most of his interactions being with Sam Daily. The rest of the cast is there mostly as backdrop. The other main star is probably Eel Marsh House itself.The Woman in Black is definitely spooky although it is of a more old fashioned type of horror that will not appeal to everyone these days, as many are now acclimatised to horror films where the blood and gore flow freely, rather than the more subtle type of chills this film delivers. 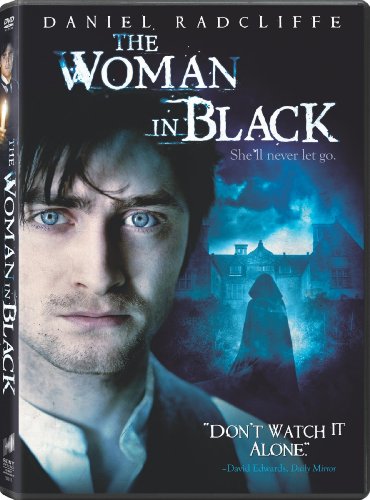