But The World's End or the Shaun of the Dead/Hot Fuzz double feature from Amazon. You too can earn money from writing articles by signing up for InfoBarrel.
InfoBarrel is a writing platform for non-fiction, reference-based, informative content. Opinions expressed by InfoBarrel writers are their own.
InfoBarrel > Entertainment > Film > Movies

Certificate 15, 109 minutesDirector: Edgar WrightStars: Rosamund Pike, Simon Pegg, Martin FreemanThe World's End is the third (mint choc-chip flavour) in the Three Flavours Cornetto trilogy of films; the other two being Shaun of the Dead and Hot Fuzz. These are not the only films Pegg and Frost have been in or even the only ones they've been in together, but these are the ones that have also involved Edgar Wright and Nira Park and are all comedy films, albeit comedy spins on some fairly standard genres - zombies, police/action and invasion. There is a Cornetto reference in each film in the series.June 22nd 1990 was the last day of school for five friends in the small town Newton Haven. In celebration, they decide to attempt the Golden Mile; having a drink in 12 different pubs, culminating in the one called The World's End. Back then, they failed to accomplish it.

Credit: http://en.wikipedia.org/wiki/File:The_World%27s_End_poster.jpgFast forward to the present and four of the five are doing well for themselves. Oliver (Martin Freeman, who has appeared in all three films, The Hobbit: An Unexpected Journey, The Hobbit: The Battle of the Five Armies, The Hobbit: The Desolation of Smaug) is a high end estate agent, Peter (Eddie Marsan) is a partner in a car dealership, Andy (Nick Frost, Cuban Fury, The Huntsman: Winter's War, Unfinished Business) is a corporate lawyer and Steven (Paddy Considine) is involved in construction. The only exception is the group's former leader, Gary King (Simon Pegg, Star Trek Into Darkness, Burke and Hare). Gary is pretty much a screwup. He drinks too much, does drugs, doesn't appear to have a proper job and doesn't accept responsibility for any of his actions and has refused to grow up, still dressing the same as he did back then. Reminiscing over the best night of his life, the attempt at the Golden Mile, he decides to contact the other four and, after some effort, convinces them to return to Newton Haven with him for another attempt. They meet Simon's sister, Sam (Rosamund Pike, Gone Girl, Jack Reacher) during the pub crawl; someone both Gary and Steven have feelings for.Pretty standard stuff so far - a group of friends meeting up after a long time apart, still with some unresolved issues between them - mostly due to Gary. Partway through the crawl it takes a different turn as they discover that everyone in the town has been replaced by alien robots. Things get messy as the group attempts to complete the rest of the Golden Mile while trying to avoid being attacked by the robots.This is not your standard alien invasion film. For one thing, the primary cast is dealing with the invasion whilst they are all drunk and getting drunker by the pub, which adds a different spin, logic pretty much going out of the window - don't try to fight the aliens, or even flee from them, as might be a sensible approach, instead just try to get to the next pub for the next pint. Even though the pubs look very similar on the inside.Great fun and quite a bit of humour, even if occasion it is a bit dark. A nicely different and humorous take on a standard film genre, just as with the previous Cornetto films, with bits of a buddy film thrown in. Even if the buddies are fighting blue blooded alien robots. The film also sees appearances by Bill Nighy (About Time, I, Frankenstein, Jack the Giant Slayer), Rafe Spall (Swallows and Amazons) and Julia Deakin, who each have a, sometimes small, part in this film and have also appeared in all three of the films in the trilogy. The soundtrack to the film consists of songs from the period of the original attempt at the Golden Mile, the late 80s and early 90s. Some of the lines in the film are taken from those songs, especially the Soup Dragons' "I’m Free." The World's End is recommended for a fun film that's a bit different to the rest. 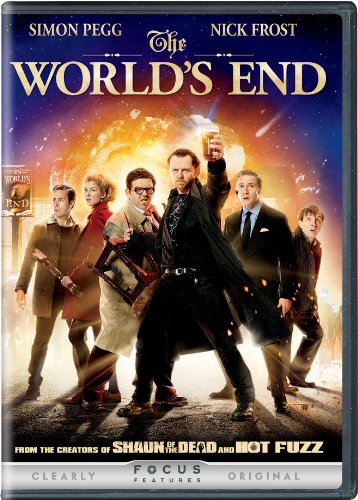