Buy This Is the End cheaply on Amazon or read more articles on film and television. You too can earn money from writing articles by signing up for InfoBarrel.
InfoBarrel is a writing platform for non-fiction, reference-based, informative content. Opinions expressed by InfoBarrel writers are their own.
InfoBarrel > Entertainment > Film > Movies

Movie Review: This Is the End

Certificate 15, 107 minutesDirectors: Evan Goldberg, Seth RogenStars: James Franco, Jonah Hill, Seth RogenThis Is the End is a disaster film with a difference, in that the actors are playing the roles of themselves, albeit (hopefully) not as genuine portrayals - it is unlikely that Michael Cera is truly an annoying cocaine-snorting degenerate - rather than playing the roles of other people. So, Seth Rogen (Bad Neighbours, Bad Neighbours 2) is playing a fictionalised version of the actor, Seth Rogen.Seth Rogen, as he portray himself in This Is the End, is a bit of a slacker who is fond of weed - a role he often portrays in films. This is even mentioned quite early in the film, that Seth Rogen always plays the same character. Rogen's best friend, Jay Baruchel, has flown into Los Angeles to meet him, even though Jay hates LA. Despite Jay's wishes, Seth takes him to a housewarming party at James Franco's (Homefront, Oz the Great and Powerful, The Interview, Your Highness) new house, which is full of lots of people - primarily actors and actresses - Jay hates, in particular Jonah Hill.

Credit: http://en.wikipedia.org/wiki/File:This-is-the-End-Film-Poster.jpgJay and Seth pop out to get cigarettes well all hell breaks loose. What seems to be an earthquake happens, people are transported into the sky on beams of blue light, and there is quite a lot of ancillary destruction, at least partially caused by the building damage from the light beams as well as cars and other vehicles suddenly becoming driverless after their drivers are transported away. Jay and Seth return to Franco's house, where all the partygoers are still going on as if nothing as happened - because they haven't noticed anything. Until another tremor happens and everyone rushes outside. A huge sinkhole opens in the garden and the cast starts getting killed off pretty quickly, with most of the remainder running away.Jay, Seth, James, Jonah and Craig Robinson run back inside the house and "fortify" it in a less than brilliant manner - such as by taping up cracks in the walls - and inventory their supplies - which includes a lot of drugs and quite a bit of alcohol. With what seem to be monsters running around outside, the group starts showing how shallow and pathetic they truly are in a situation of real danger. Infighting and name calling are frequent, with none of them behaving in a truly noble fashion in the crisis. They cannot work out what is going on; as time goes by, the world outside the house becomes more and more devastated as fires rage out of control.The film has an all star cast, all playing themselves, although many have fairly limited roles with some, like Rihanna (Battleship, Home) being killed off pretty quickly, and sometimes messily. Emma Watson is brilliant as she proves harder than the six men in the house (Danny McBride (The Angry Birds Movie) having joined them) and takes their supplies.This is really, really not a family friendly film. There is a lot of foul language, plenty of sexual and drug references and a few pretty gory scenes, especially one with Michael Cera in it. The swearing is pretty funny, something that isn't always the case, and seems to fit with the film rather than just being there for the sake of it or for shock value. it is unlikely that the film will appeal to everyone, but to those it does appeal to it is really, really funny. Could there be a sequel? Well, it's not likely a direct sequel can be done easily, but it has been suggested one could be made where the disaster happens at the premiere to This Is the End. 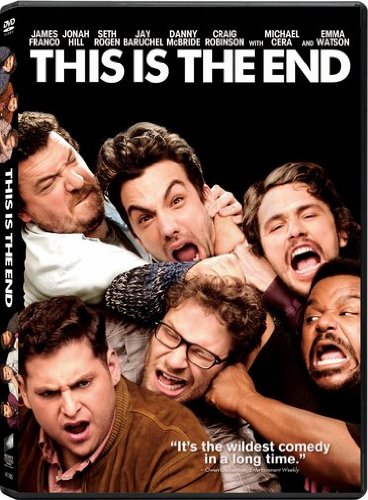