Get This Means War cheaply from Amazon, or read more articles on film and television. You too can earn money from writing articles by signing up for InfoBarrel.
InfoBarrel is a writing platform for non-fiction, reference-based, informative content. Opinions expressed by InfoBarrel writers are their own.
InfoBarrel > Entertainment > Film > Movies

Certificate 12A,97 minutesDirector: McGStars: Reese Witherspoon, Chris Pine, Tom HardyThis Means War is a romantic comedy with a slight action twist. FDR Foster (Chris Pine, Jack Ryan: Shadow Recruit, Star Trek Into Darkness) and Tuck (Tom Hardy, Mad Max: Fury Road, The Dark Knight Rises) are two agents - who are also best friends - for the CIA - agents in the James Bond, shoot everyone and blow things up sense, rather than more realistic covert operatives. The film starts with them in Hong Kong, tracking down an international arms dealer, Heinrich (Til Schweiger), in order to stop him from acquiring a weapon. During the ensuing violence, Heinrich's brother Jonas (Clint Carleton) is killed. Heinrich does not take this well and vows to track down and kill the pair.

Credit: http://en.wikipedia.org/wiki/File:This_Means_War_Poster.jpgWhen they end up back in the United States, both, unintentionally, wind up dating the same girl, Lauren (Reese Witherspoon), although they meet her through different means. They agree to not interfere with each other's chances with her as well as setting ground rules as to how they will behave. Lauren is also willing to date two men at the same time, although she does feel conflicted over it, but her best friend Trish (Chelsea Handler) urges her to continue.Tuck and FDR both, separately, make - improper - use of CIA assets, surveillance technology and personnel in order to spy on and find things out about Lauren, so that they can each improve their chances with her by finding out as much as possible about her as possible, which they can then act on. This includes tapping her phone lines. As the competition between the two heats up, they also start using said assets to sabotage the other person. Lauren, in the mean time, does not know what either one actually does for a living. Even though both Tuck and FDR had agreed at the beginning not to let Lauren come between them, not surprisingly their friendship suffers from them both becoming attached to and pursuing the same girl. Meanwhile, Heinrich is coming closer to the pair with the intention of taking his revenge.One thing that is not explained is why the British Tuck is working for the CIA, something that does seem slightly odd. How both Tuck and FDR were able to get away with basically abusing the CIA's assets so easily is also a bit on the strange side. It seems these were ignored in order to concentrate on the romantic elements of the film. The backdrop of Heinrich's quest for revenge against FDR and Tuck is not fully exploited, and it only takes up a fairly minimal amount of screen time - probably under ten minutes. The film could have been better if more time had been spent exploring this twist and the collision of FDR and Tuck's professional and personal lives. On the whole, the film is mostly predictable - events turn out the way they are expected to, relationships go through predictable changes and people change for the better in expected ways. This Means War is an okay romantic comedy with a bit of a twist, although the full potential of that twist was not explored. 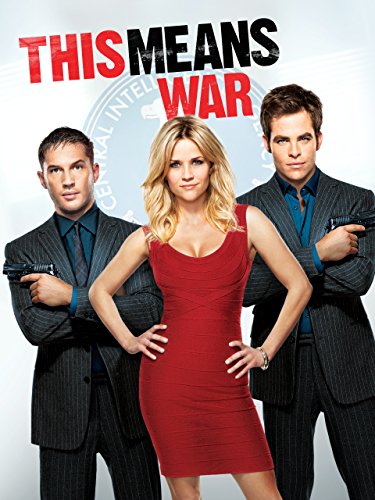