Get Tinker, Tailor, Soldier, Spy cheaply from Amazon, or read more articles on film and television. You too can earn money from writing articles by signing up for InfoBarrel.
InfoBarrel is a writing platform for non-fiction, reference-based, informative content. Opinions expressed by InfoBarrel writers are their own.
InfoBarrel > Entertainment > Film > Movies

Director: Tomas AlfredsonStars: Gary Oldman, Colin Firth and Tom HardyTinker, Tailor, Soldier, Spy is a Cold War espionage thriller based on John le Carré's book of the same name. George Smiley (Gary Oldman, Dawn of the Planet of the Apes, RoboCop, The Dark Knight Rises) has been brought out of his forced retirement in order to find a spy right at the top of the organisation referred to in the film as the "Circus" which is the SIS, Britain's Secret Intelligence Service (usually, and incorrectly, referred to as MI6). This "mole" (or double agent) has been spying for the Soviets for years and, with Smiley now an outsider and no longer working for the SIS, Smiley is the only man who can now be trusted as his retirement shows that he can't be the still active double agent.

Credit: http://en.wikipedia.org/wiki/File:Tinker,_Tailor,_Soldier,_Spy_Poster.jpgSmiley is tasked by Undersecretary Oliver Lacon (Simon McBurney) to find out which of the men it could be. The former head of SIS, "Control" (John Hurt, Hercules), suspected Percy Alleline (Toby Jones, Red Lights, Your Highness),Toby Esterhase (David Dencik), Roy Bland (Ciarán Hinds, Miami Vice, The Woman in Black, Ghost Rider: Spirit of Vengeance) and Bill Haydon (Colin Firth, Before I Go to Sleep, Kingsman: The Secret Service). As Smiley is retired he no longer has access to the SIS itself and the paperwork he needs to do this task and so he has an active member of the SIS, Peter Guillam (Benedict Cumberbatch, Star Trek Into Darkness, The Hobbit: The Battle of the Five Armies, The Hobbit: The Desolation of Smaug, The Imitation Game), helping him to get the information he requires.Much of the film is spent with the major characters sat in various hotel rooms and offices, either discussing matters or going through paperwork. Smiley does not rush around trying to find the mole; instead he gathers information and carefully goes through it all looking for evidence of the mole and to set a trap to catch him. The mole works for the unseen Soviet spymaster "Karla" who Smiley met earlier in his career.George Smiley is nothing like his more famous fictional colleague who works for the same agency, James Bond. He is quiet and mild-mannered, does not go around shooting people or engaging in hand to hand combat. He is a highly intelligent and thoughtful office-bound analyst and spymaster, not the jet-setting, bed-hopping international playboy with fast cars and expensive toys that Bond is. As such, he is a rather more realistic depiction of what a member of the intelligence services should be than Bond is - no spy should call attention to himself in the sort of manner that Bond does. Smiley is not even a field agent, but is a bureaucrat, although one who is very good at his job.This does mean that if you are expecting an action thriller, you will most certainly be disappointed. Tinker, Tailor, Soldier, Spy is much more slowly paced and it is definitely not an action film. There is far more talking than what little action there is, most of which involves Jim Prideaux (Mark Strong). It is however an excellent Cold War espionage thriller, although it should be remembered that it is set in the early 70s and the world has changed since then, and maybe not for the better. 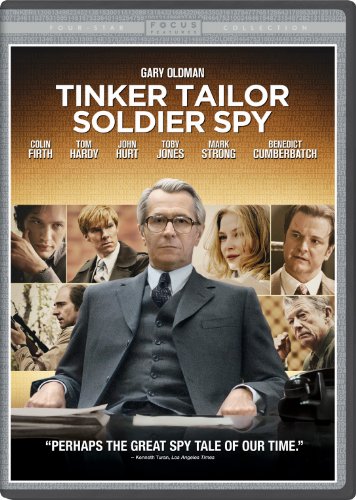