Watch the original Total Recall film cheaply on Amazon or read more articles on film and television. You too can earn money from writing articles by signing up for InfoBarrel.
InfoBarrel is a writing platform for non-fiction, reference-based, informative content. Opinions expressed by InfoBarrel writers are their own.
InfoBarrel > Entertainment > Film > Movies

Certificate 12A, 118 minutesDirector: Len WisemanStars: Colin Farrell, Kate Beckinsale and Jessica BielTotal Recall is a remake of the 1990 Arnold Schwarzenegger (The Expendables 2) film of the same name. Both films are based on Philip K Dick's short story We Can Remember It For You Wholesale.The film is set in the late 21st century. Global chemical warfare has rendered much of the planet uninhabitable, with only two territories, the United Federation of Britain, which appears to control the British Isles and some of Europe, and the Colony, which appears to control Australia, still in existence. Living space is at a premium because so little is left - it seems that even within those territories, not all the land is inhabitable.

Credit: http://en.wikipedia.org/wiki/File:TotalRecall2012Poster.jpgIt's never entirely clear what the political relationship between the two nations is, or even if they are two separate nations. travel between the two is done by using "the Fall" which is what is known as a gravity elevator that allows fast transport through the centre of the planet between the two territories. Many residents of the Colony live there and work in the UFB.Douglas Quaid (Colin Farrell, Fright Night, Seven Psychopaths, Dead Man Down) lives in the Colony with his wife Lori (Kate Beckinsale, Absolutely Anything, Contraband, Underworld: Awakening), and works in a factory in the UFB producing "synthetics" which are essentially robot police or soldiers. Quaid is somewhat dissatisfied with his life and decides to go to Rekall, a company that give you fake memories. There, he decides to get some memories of being a secret agent - something it appears he has an interest in as he was seen earlier on the Fall reading a book by Ian Fleming, whose best known creation is James Bond.At this point things start to go weird for Quaid - armed police break into Rekall and start shooting and Quaid instinctively attacks and defeats them, with no idea how he was able to do it afterwards. Things start to get hectic, with his whole life apparently a lie, including his wife. He goes on the run and meets up with a member of the Resistance which is led by Matthias (Bill Nighy), Melina (Jessica Biel). Much mayhem, fights, explosions and car chases ensue as Quaid tries to work out what reality actually is.The plot is mostly the same as the original film, although all the action takes place on Earth - unlike in the original, there is no off planet travel to Mars which also makes a difference to the end of the film. The megacities of the UFB and the Colony are impressive, if a little bizarre in how they are set up - if land to live on is so rare, why haven't the cities been designed more rationally? There does seem to be a nod to a scene in the 1990 version - in the original film there is a bit where Schwarzenegger's character is going through a security area disguised as a fat lady; in this film, a rather similar looking lady goes through something similar just before Farrell's character does. Total Recall is okay, but the Schwarzenegger version was better. 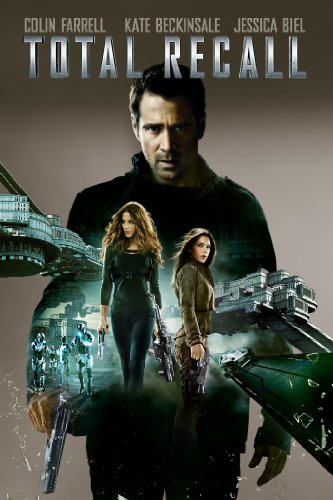