Buy Transformers: Age of Extinction or other Transformers merchandise cheaply from Amazon. You too can earn money from writing articles by signing up for InfoBarrel.
InfoBarrel is a writing platform for non-fiction, reference-based, informative content. Opinions expressed by InfoBarrel writers are their own.
InfoBarrel > Entertainment > Film > Movies

Certificate 12A, 165 minutesDirector: Michael BayStars: Mark Wahlberg, Nicola Peltz, Jack ReynorTransformers: Age of Extinction begins with a fleet of nautiloid spaceships carpet bombing a planet, presumably Earth, and killing off what look like dinosaurs, before going to the Arctic in the present day, where a metallic skeleton of what looks like a dinosaur has been discovered at a mining operation.Set five years after the events of Transformers: Dark of the Moon and the Battle of Chicago, the alliance with the Autobots has ended and a CIA team known as Cemetery Wind and run by Harold Attinger (Kelsey Grammer, Bad Neighbours 2), with the field team led by James Savoy (Titus Welliver), is supposedly hunting down and killing Decepticons - although they are also after Autobots, with the aid of another Transformer called Lockdown (Mark Ryan) who doesn't appear to belong to either of the two known sides, but is instead a galactic bounty hunter.

Credit: http://en.wikipedia.org/wiki/Transformers:_Age_of_Extinction#mediaviewer/File:Transformers_Age_of_Extinction_Poster.jpegCade Yeager (Mark Wahlberg, 2 Guns, Contraband, Ted) is an inventor and robotics expert in Texas, where he runs Yeager Research & Development - a much grander company than it sounds, as he is broke and in danger of losing his house. He buys a truck that has been shot full of holes and takes it back to his house, where he is planning to sell it off for parts, to help get his daughter, Tessa (Nicola Peltz), through college. The truck turns out to be a Transformer, a badly damaged Optimus Prime (Peter Cullen). From this point on the film turns out to be an action filled extravaganza, as battles between various Transformers and humans take place across two countries with much destruction ensuing, as the CIA try to capture Optimus Prime for Lockdown.The film is available in both 2D and 3D, with the 3D version being the one seen. This is one of those films where the 3D works quite well, despite having a lot of live action (for some reason, 3D seems to work better with CGI), as there is a lot of CGI in it, with many scenes deliberately shot to emphasise the 3D. Transformers: Age of Extinction is not great art by any stretch of the imagination; the plot is a bit sketchy, and doesn't always seem to necessarily make sense. There is quite a bit of dodgy science - you can't carbon date something back to 65 million years ago (especially if it probably doesn't actually contain carbon); about 50,000 years is the normal maximum[1] - and there also isn't much in the way of land at the North Pole, so where exactly were they mining and where did the dinosaur skeleton come from?Having said that, it does deliver what you'd expect - lots and lots of action and effects, often slowed down so you can truly appreciate it. The film isn't really anything but action, so if action filled special effects ridden films with lots of vehicular and building destruction isn't your thing, this is not going to appeal. There is also rather a lot of product placement; some of it is quite subtle, such as all the cars that the Transformers turn into - like Bugattis, Lambourghinis, Chryslers and Paganis - but in other cases it isn't. There are a number of distinct occasions where the product, or the logo, takes centre place on the screen and the camera lingers on it so that you have time to truly see it, such as with a Beats Pill, Victoria's Secret, Gucci and some brand of Chinese milk. Still, seeing as those are memorable, it could be argued that the product placement worked. The effects have been upgraded from the earlier films, with some of the Transformers transforming using a whole new method, but all the human characters from the first three films are gone, with only those of Transformers remaining.As well as the action, there are elements of humour, which are primarily provided by the character of Joshua Joyce (Stanley Tucci, Jack the Giant Slayer, Percy Jackson: Sea of Monsters, The Hunger Games), the genius founder and head of KSI, a technology company that is working with Attinger and taking the fallen Autobots from them in order to develop the same type of technology, but there are other bits, such as the reference to all current films being either sequels or remakes (in a film which is a sequel). Attinger and Savoy are appropriately ruthless and unlikeable, with no redeeming features, although their motivations seem rather erratic - are they patriots or mercenaries? - but many of the other characters are just there for padding, with little time spent on developing them into proper characters. Transformers: Age of Extinction does what it says on the tin - it has lots of action and special effects, but not a whole lot else. 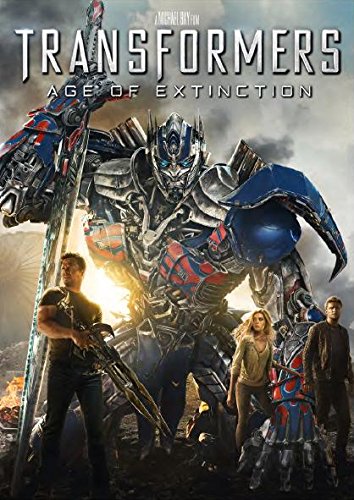