Buy Unfinished Business cheaply from Amazon. You too can earn money from writing articles by signing up for InfoBarrel.
InfoBarrel is a writing platform for non-fiction, reference-based, informative content. Opinions expressed by InfoBarrel writers are their own.
InfoBarrel > Entertainment > Film > Movies

Certificate 15, 91 minutesDirector: Ken ScottStars: Vince Vaughn, Dave Franco, Tom WilkinsonIn Unfinished Business, Dan Trunkman (Vince Vaughn, The Internship, The Watch) is a sales rep working for Dynamic Progressive Systems. When his sales manager boss, Chuck (Sienna Miller) - a woman despite the name, cuts his salary by 5% he decides to walk out and set up his own company, in a scene rather reminiscent of the Tom Cruise one from Jerry Maguire. Dan asks if anyone wants to join him in his new company and, unlike in Jerry Maguire, two people seem to join him - only it turns out that the older one, Timothy McWinters (Tom Wilkinson), is leaving because he has been let go for being too old to stay at the company any longer, and the younger one, Mike Pancake (Dave Franco, Bad Neighbours, Bad Neighbours 2, Now You See Me), despite having a box of office stuff, had only turned up for a job interview. One he had failed to get at that. Mike seems possibly a bit slow at times, but sometimes seems smarter.

Credit: https://www.youtube.com/watch?v=xBjJFxS0PoQDan's new company, Apex Select, and, presumably, his old company with whom he is now competing, deal in swarf, which Dan describes in film as the bits of metal left over after machining it, and as being boring, although it seems that absolutely anything could have done the job for the product, as it has no relevance to the actual plot of the film - or the names of the companies in question.One year later and Apex Select is not doing that well, and it's being run out of a Dunkin Donuts. The three are heading from St. Louis to Portland, Maine to finalise a big deal that they've been working on for a year, and that they really need or the company is going to go bankrupt. Dan is also dealing with problems that his two children are having at school, and some homework from his daughter, entitled "Who's yer daddy?" This homework Dan narrates answers to throughout the film, although not really ones he could tell his daughter, as he progresses through various situations.When they arrive in Portland, to complete what they think is a done deal with Bill Whilmsley (Nick Frost, Cuban Fury, The Huntsman: Winter's War, The World's End), Dan bumps into his old boss, Chuck. Bill tells them that it isn't a done deal, as his own boss, Jim Spinch (James Marsden), is asking both Chuck and Dan to start again from scratch. If Dan wants to get anywhere, the lot of them are going to have to go and see Jim's boss in Berlin. When they arrive in Berlin, there is nowhere to stay, as there is a marathon, Oktoberfest, a G8 summit and the Folsom festival all going on at the same time. It seems that Apex Select is being given the run-around.This is a really confused film. There are a number of decent comic actors in it, but none of them are particularly well utilised. It often seems that Unfinished Business isn't really sure whether or not it is a comedy, or whether it's something else entirely. There are occasional funny scenes, but these are generally few and far between. Many of the scenes that are supposed to be funny seem to be designed to do that simply by creating awkward situations. The rating of the film isn't a surprise, due to the amount of bad language and partial nudity, but it could probably have had a lower rating if those had been skipped, because the latter in particular does not add anything to the plot. Instead, it seems like they just wanted to see how many topless women they could show in it. This is coupled with some at times quite obtrusive product placement. Unfinished Business seems to be what you try and combine a comedy with several other film types at the same time, but without having that planned from the start - a mess in other words, that isn't successful at any of them. 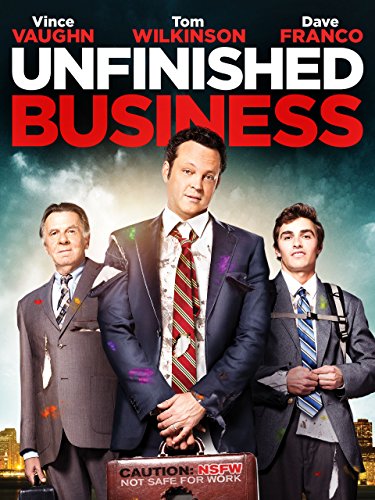