Watch We're the Millers cheaply on Amazon or read more articles on film and television. You too can earn money from writing articles by signing up for InfoBarrel.
InfoBarrel is a writing platform for non-fiction, reference-based, informative content. Opinions expressed by InfoBarrel writers are their own.
InfoBarrel > Entertainment > Film > Movies

Certificate 15, 110 minutesDirector: Rawson Marshall ThurberStars: Jason Sudeikis, Jennifer Aniston, Emma RobertsIn We're the Millers David Clark (Jason Sudeikis, The Angry Birds Movie) is a small time drug dealer. After getting ripped off he winds up owing his somewhat nutty drug supplier boss Brad Gurdlinger (Ed Helms, The Hangover Part II, The Hangover Part III) quite a lot of money. Brad convinces David to take a trip to Mexico to collect a "smidge" of marijuana that is waiting for him in return for a large payoff and having his debt forgiven. Not that Brad actually gives he a real choice - go, or else.David may be happy as a dealer of dimes of pot, but he is less than enthralled at the idea of becoming an international drug smuggler - and he makes a point of stating that the two are different jobs - but he has no option. One problem is how to get the marijuana across the Mexican border, because one man travelling by himself through customs, especially one who looks like he does, is going to be suspicious.H

Credit: https://en.wikipedia.org/wiki/File:We%27re-The-Millers-Poster.jpge comes up with a plan to travel as a clean cut all American family. The only problem with this plan is he doesn't actually have a family. So he hires on. He asks his neighbour, and stripper, Rose O'Reilly (Jennifer Aniston) to masquerade as his wife, Kenny Rossmore (Will Poulter, Plastic, The Maze Runner), a bit of a dork who also lives in the same apartment block as their son and local runaway and gutter punk Casey Mathis (Emma Roberts, Scream 4) as the daughter - making them into the Miller family. All the members of the family are pretty dysfunctional in their own ways.Brad has arranged for them to pick up an enormous recreational vehicle (RV) to drive into Mexico and back to him to carry the drugs in. The "smidge" of marijuana David is picking up turn out to be an absolutely enormous amount of it - that's why the RV was so big after all. Along the way the Millers start behaving like a real, if still rather dysfunctional, family. The drug deal is more complicated than David expected though, hasn't been organised as well, and his plan isn't as foolproof as he thought, and the Millers run afoul of angry drug lords and leave a fair bit of devastation in their wake.The film is frequently funny, although there is a fair bit of bad language and it is sometimes crude. The Millers may be trying to be a normal family, but none of them really qualifies as being normal themselves, and it frequently shows in how they speak and act. There are a number of other, often slightly odd, characters they meet on their journey back, some of whom would appear to be deliberately stereotypical such as the overly violent border guards. The overall outcome of the film is not that surprising, but it works well and the characters bounce off each other nicely. There are also some outtakes in the end credits to watch out for. We're the Millers is a good comedy film, although not recommended for the easily offended. 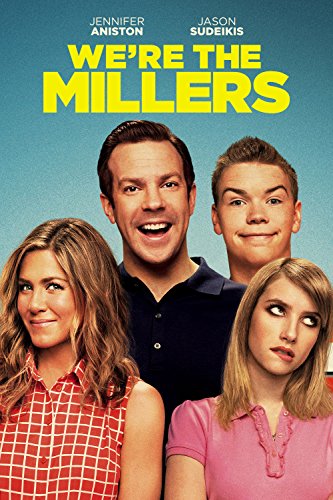