Buy the film X-Men: Days of Future Past or the comic book of the same name cheaply from Amazon. You too can earn money from writing articles by signing up for InfoBarrel.
InfoBarrel is a writing platform for non-fiction, reference-based, informative content. Opinions expressed by InfoBarrel writers are their own.
InfoBarrel > Entertainment > Film > Movies

Certificate 12A, 131 minutesDirector: Bryan SingerStars: Patrick Stewart, Ian McKellen, Hugh JackmanX-Men: Days of Future Past is partially based on the comic book storyline of the same name , and starts out in the not-too-distant future, probably in the 2020s, in a devastated New York, with Charles Xavier (Patrick Stewart, Ted) giving a narration about the war that is taking place, and of the Sentinels, which are powerful, adaptive robotic creations that started out attacking mutants, and then started broadening their range. There is then a visit to Moscow, and an impressive fight scene between mutants and Sentinels, before going to China. Professor X and Magneto (Ian McKellen, The Hobbit: An Unexpected Journey, The Hobbit: The Battle of the Five Armies, The Hobbit: The Desolation of Smaug) have a plan to try and stop the war by preventing it from ever happening in the first place. This plan involves sending the consciousness of Logan/Wolverine (Hugh Jackman) back into the past, to try and change the events that led to the war.Wolverine is sent back to 1973, at the end of the Vietnam War, to change the events that led to the creation of the Sentinels by Dr. Bolivar Trask (Peter Dinklage, Pixels, The Angry Birds Movie). The presence of the Sentinels in this film could have been guessed at, by the mid-credits scene in The Wolverine. In the background, before Magneto and Professor X appeared, there was an advert for Trask Industries, and those with enough familiarity with the X-Men would know that Trask manufactured the Sentinels. This is prior to Wolverine's adamantium upgrade to his skeleton, which causes him a moment's confusion when he walks through a metal detector with no problems.

Credit: https://en.wikipedia.org/wiki/File:X-Men_Days_of_Future_Past_poster.jpgWolverine needs the help of a younger Charles Xavier (James McAvoy, Trance, Welcome to the Punch) and Erik Lehnsherr/Magneto (Michael Fassbender), in order to find Raven/Mystique (Jennifer Lawrence). This poses more than a few problems; first, as Professor X has lost hope and has closed down the school, with only Hank/Beast (Nicholas Hoult, Jack the Giant Slayer, Mad Max: Fury Road, Warm Bodies) remaining there, so he will need some convincing to help. Secondly, Magneto is prisoner number 0001 in a facility buried a long way below the Pentagon, and so he will need breaking out. The last problem is Wolverine himself; to ensure success, he is going to have to avoid doing anything that will break the connection with the past. He is advised to think "peaceful thoughts" - not exactly a strong point of his.X-Men: Days of Future Past is set in two different time periods; the past 1973 that Wolverine's consciousness travels back to, and the apocalyptic future as the surviving mutants defend against the Sentinels whilst Wolverine attempts to complete his mission. Most of the time is spent in the past, with only brief intervals set in the future, with another impressive battle between mutants and Sentinels.The film is available in 2D and 3D, with the 2D version being the one watched; the opening credits in particular appear to have been designed with 3D in mind. Regarding the level of continuity between the other X-Men, and Wolverine, films and this one, it doesn't appear to be total. The events of X-Men: The Last Stand and X-Men: First Class are certainly referred to in it. In the mid-credits film at the end of The Wolverine, Professor Xavier and Magneto asked for Wolverine's help, but the help he provides is done several years later, so it's not clear why they approached him then, other than as a way to link the two films. It is still not explained how Professor X is no longer dead from the actions of Phoenix, even if it was referred to in the mid-credits scene.There is a post credits scene, so hang on to catch it, that hints at... something; a something which can actually be guessed by the skin colour of the person and the appearance of several people in the background who provide a hint. It is certainly given away by the title of the sequel to this film.The pace of the film is effectively non-stop, with plenty of spectacular action set-pieces of a really impressive nature. The special effects in this film are really quite superb. It is not just an action film, either, as the relationship between Professor X and Magneto, both old and young, plays and important role. Here are two men who are often friends, but are often also opposed in what they think is the correct course to take. There is also a fair amount of humour present, usually down to Wolverine, and other things such as a scene in which the characters are discussing time travel whilst an episode of Star Trek is running in the background, with Captain Kirk discussing the same thing, which provide an uptick in what could sometimes be otherwise a fairly downbeat film, even if it is not shot in a dark manner. X-Men: Days of Future Past is a film that should keep fans gripped for its entire length, and in some ways looks like it could be considered to be a reboot of the franchise, but with the same actors and characters, rather than starting everything over again from the beginning. 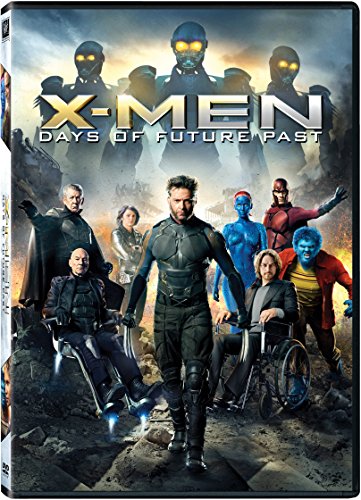