To read more articles on film and television, visit the DirectoryGold Article Directory. You too can earn money from writing articles by signing up for InfoBarrel.
InfoBarrel is a writing platform for non-fiction, reference-based, informative content. Opinions expressed by InfoBarrel writers are their own.
InfoBarrel > Entertainment > Film > Movies

15 certificate, 102 minutesDirector: David Gordon GreenStars: Danny McBride, Natalie Portman and James FrancoWhen the bride, Belladonna (Zooey Deschanel), of Prince Fabious (James Franco, Homefront, Oz the Great and Powerful, The Interview) the heir to the kingdom, is kidnapped by the evil wizard, Leezar (Justin Theroux), on their wedding day, Fabious goes on a quest to find and save her. His younger, good-for-nothing brother Prince Thadeous (Danny McBride, The Angry Birds Movie, This Is the End) wants nothing to do with such a potentially dangerous quest, but their father, King Tallious (Charles Dance), gives Thadeous an ultimatum - help with the rescue, or be disinherited. And so, the bold princes, their squires, Courtney (Rasmus Hardiker) and Julie (Toby Jones, Red Lights, Tinker, Tailor, Soldier, Spy), and the knights elite set off on their quest.This film has all the standard components of a sword & sorcery story; an evil warlock, a good wizard, a noble prince and a fair maiden. This is not your standard story though. The good wizard is a pervert, the fair maiden is poorly socialised - which comes from being sequestered from the world since being kidnapped as a child - and the actual "hero" is Prince Thadeous, whose actions are not heroic by any definition of the word, as our first introduction to him is when he is facing punishment for his behaviour whilst on a diplomatic mission. Fabious is an accomplished questor, and rescued Belladonna originally after defeating the latest of Leezar's creatures sent to terrorise the kingdom, a cyclops.

Credit: http://en.wikipedia.org/wiki/File:Your_Highness_Poster.jpgThadeous is more than somewhat envious of his elder brother; Fabious is successful, popular, an accomplished swordsman and questor and, on top of all that, is also heir to the kingdom. Thadeous is a lazy coward, whom no-one really expects anything of.Leezar has kidnapped Belladonna in order to fulfil a prophecy when the two moons align, for the standard evil reason of wanting to rule the world, as this will cause her to give birth to a dragon which Leezar will control. When the princes meet the good wizard tells the princes that no normal sword will kill Leezar, and that they need to the Sword of the Unicorn that is hidden inside a maze, and gives them the means to find it.Along the way they face betrayal and capture and meet up with another questor, Isabel (Natalie Portman, Thor: The Dark World), to whom Thadeous takes a shine which, not surprisingly, isn't returned. Isabel is a fine fighter in her own right, like Fabious, which is more than can be said for Thadeous, who would much rather flee from a fight. After some dispute, they combine their forces in order to defeat Leezar.This isn't a brilliant film by any standards; foul language and crudity are often used for humour rather than writing something genuinely funny. 40 Year Old Virgin it isn't. On the plus side, it is a lot better than anything by the disastrous writing combination of Jason Friedbury and Aaron Seltzer. It's probably better than several of their films combined. Even though it isn't told in the standard manner typical to such fantasy stories with evil wizards, the actual story itself is no different, just with a lot more, probably needless, swearing.Definitely not a family film with a lot of crude language and sexual references, but Your Highness is an okay watch if you don't fancy anything more complex. 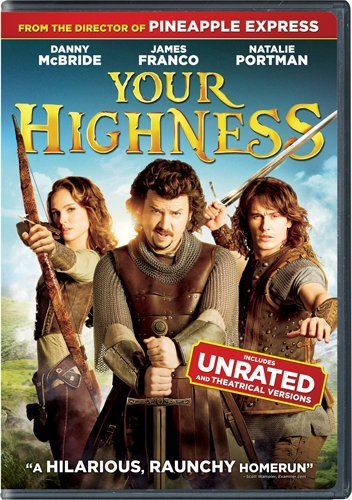