Buy Zombieland or other zombie stuff cheaply from Amazon. You too can earn money from writing articles by signing up for InfoBarrel.
InfoBarrel is a writing platform for non-fiction, reference-based, informative content. Opinions expressed by InfoBarrel writers are their own.
InfoBarrel > Entertainment > Film > Movies

Certificate 15, 88 minutesDirector: Ruben FleischerStars: Jesse Eisenberg, Emma Stone, Woody HarrelsonIn Zombieland Columbus (Jesse Eisenberg, American Ultra, Now You See Me, The Social Network) stars as the rather unusual survivor of the zombie apocalypse that has turned the United States of America into Zombieland. He has a wide range of phobias and spent his most of his time at home, in his apartment, alone, playing World of Warcraft. His survival he credits to a whole list of rules which he follows religiously, and which appear on the screen when mentioned, such as Rule #1: Cardio. To escape zombies you need to be able to run, so it's important to stay in shape. As he says, the fatties were the first to get eaten.

Credit: http://en.wikipedia.org/wiki/Zombieland_2#mediaviewer/File:Zombieland-poster.jpgBeing unsociable did mean that he was alone when the zombie apocalypse happened, which did up the chances of his survival. Columbus is now on the way to Columbus, Ohio, to see if his parent survived - most of the people in the film, of which they are truly only the four main characters, a couple of minor ones (including one excellent cameo), and many, many zombies - are referred to by their place of origin. He is wondering if he is the last person alive when he meets Tallahassee (Woody Harrelson), a man desperately seeking a Twinkie who really gets into the whole zombie killing thing. A rather unlikely pair at best. Later, they run across a pair of sisters, Wichita (Emma Stone, Birdman, The Amazing Spider-Man, The Amazing Spider-Man 2) and Little Rock (Abigail Breslin, Ender's Game, The Call), a pair of con artists. The meeting does not initially go very well, but the four team up to trek across the United States of Zombieland.Zombieland is a comedy horror film. There is plenty of gore, an awful lot of violence, although most - but not all - of it is perpetrated on zombies, but also plenty of humour. This is not a film that takes itself too seriously. The gun-happy, zombie killing often seems to be trying to kill zombies as oddly as possible, as well as with overwhelming firepower. This is a road trip with zombies, but it isn't a dreary and depressing zombie film (or series). Instead, it's rather upbeat, despite the fact that the world has been destroyed by a burger.Columbus finds the older sister, Wichita, to be rather attractive. Mind you, it's not like there's a lot of choice nowadays, and he admits early on in the film that his experience with girls is rather limited (and, in fact, his biggest interaction to date did not end well). So, the film is largely about the relationships between this unlikely group of characters who are all trying to survive in a zombie wasteland, and who along the way become friends. The interactions do make the film. Not all of Columbus's rules for survival are actually mentioned, but see how many you can catch. There is also a post credit scene, although it looks like it was probably an outtake, to watch out for. Zombieland is a funny, if gory, venture into the zombie genre. 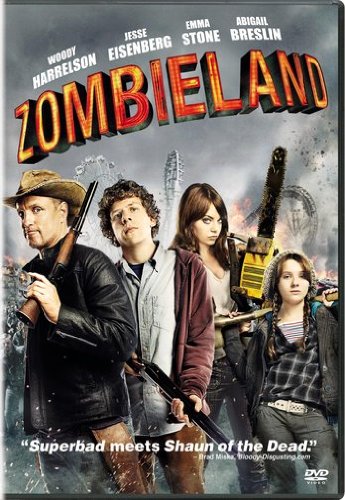