I'm the man who's gonna be King of the Writers!
InfoBarrel is a writing platform for non-fiction, reference-based, informative content. Opinions expressed by InfoBarrel writers are their own.
InfoBarrel > Entertainment > Film > Movies

More than meets the eye! Robots in disguise!

Spoiler alert! There will be spoilers......

Transformers! More than meets the eye! Autobots wage their battle to destroy the evil forces of.........the human race? I think someone changed the song.

So Transformers: Age of Extinction came out recently, and I went to see it with a friend (at said friend's suggestion). I really had no interest in seeing the film, barely saw any of the trailers, and knew nothing about its premise other than the fact that it featured Mark Wahlberg and the Dinobots. This was a bit odd for me, as I am a fan of the franchise and—with the exception of the second one—actually liked the other films (which renders all my future opinions invalid and stupid). I guess Dark of the Moon had pretty much closed out the series well, what with all four Decepticon leaders being killed by the U.S. Military and Shia LeBouf (I think Optimus Prime might have helped kill Megatron. I think he distracted him). I don't know why I just didn't care about this new one coming out. I guess I had dedicated my excitement to The Amazing Spider-Man 2 while Age of Extinction featured every possible Michael Bay cliché on the movie poster (giant robot with a sword riding a metal dinosaur while the tank top-wearing male Caucasian action hero carried a huge alien gun), and so I walked into the film expecting it to be nothing more than a cash grab (as if any of Bay's other films weren't).

I think this might have been the best Transformers film to date.

Now I've heard many people say this was nothing but a rehash of the other three films, and in many ways it was. But it also brought in many new elements that fans of the original cartoon, like myself, would be thrilled to see. We're introduced to the concept of the Transformers having been created by some mysterious otherworldly beings (will the next film feature the Quintessons?). We are introduced to Megatron's upgraded form, Galvatron. We are introduced to a film that pits the Autobots against new enemies rather than the Decepticons. And one of those enemies is the human race itself.

The film starts off with the Autobots being hunted down by the mysterious Harold Attinger (played by Kelsey Grammer) and his elite CIA agents. The fact that the Autobots (and remaining Decepticons) are being hunted by the United States Government was a refreshing change for me, as it meant that the military wasn't going to be the ones fighting the Decepticons. This was no two and a half hour long commercial for the Army like the other films were (and Tyrese Gibson is absent, thank Primus). With the exception of Mark Wahlberg, the Autobots get pretty much no human help. And that meant more focus on the Autobots rather than the U.S. Armed Forces. This does wonders to set the film apart from the original trilogy. Just as much focus is given to the Transformers as it is to the humans, and Optimus Prime at least shares the protagonist role rather than just being a supporting character. As for Optimus, well, this film took a much harder look at him as a character than the other three did. Let's just say that he is not as unshakeable as other incarnations of his character make him out to be. Even Optimus Prime has a breaking point.

But at least he didn't commit suicide over losing a video game. 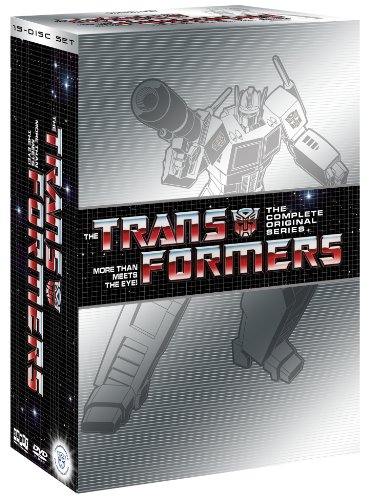 Transformers: The Complete Series Amazon Price: $48.51 Buy Now(price as of Aug 19, 2016)
This show was so great. The first season was gold. It actually had continuity, unlike other shows of its kind in the 80's.

Mark Wahlberg does a good job as inventor Cade Yeager, though the whole “crazy inventor with garage full of half-functioning household robots” is a cliché that needs to die already. He's no Doc Brown. His daughter's main attribute is being hot and screaming for her daddy to help her, though I will give her the fact that she tends to get herself out of tense situations rather than actually relying on her father and boyfriend for the rescue. Speaking of her boyfriend, he just sort of shows up and establishes himself as a main character and a source of conflict for Wahlberg, who needs to balance his desire to protect and take care of his daughter with her need for freedom. It's about as deep as you're going to get for characterization in a Michael Bay film. Oh, Wahlberg also has some retarded surfer dude stereotype following him around. This waste of space thankfully gets killed in the first act. Think of that less as a spoiler and more of me giving you a reason to watch it for more than seven minutes.

The villains, on the other hand, were definitely one of the movie's true highlights. As I mentioned before, Kelsey Grammer plays Harold Attinger, a CIA agent with a chip on his shoulder who has decided to use his resources to make the money that he would never make from the government, regardless of the moral and ethical implications. The fact that I started out that sentence with the words “Kelsey Grammer” tells you automatically that this is probably the most awesome human character in the movie. Wait, why is the word “probably” in there? Also, the head of his hit squad is definitely a ruthless killing machine. When he orders his men to “shoot the girl” (Wahlberg's 17 year old daughter) as she pleads for her life, the sense of hatred you feel in your mind directed towards this man is the very mark of a great villain (making Optimus Prime's explosive rescue that much sweeter). As far as non-human villains go, Lockdown displays a level of cunning and ruthlessness that even Megatron never had. Though he doesn't seem to radiate the sheer power that was Megatron, I loved the giant transforming robot hitman that struck from the shadows and was above the “silly” Autobot-Decepticon war. And speaking of Megatron, he's back as Galvatron, a human-created upgrade that was made in Megatron's image and completely out of their control. Megatron's manipulations show that he is as scheming as ever, and his new identity as Galvatron is like the difference between a regular Terminator and the T-1000.

Also, Galvatron is voiced by Frank Welker, his voice actor from the original 1984 cartoon. Optimus Prime is still voiced by Peter Cullen. Those tears of joy you are crying are completely natural and nothing to be ashamed of.

I don't have anything to say about the action scenes, honestly. Have you ever seen a Michael Bay film? Yes? Good, you've already seen the action scenes in this movie. Which means that they are an awesome explosion-fest, though at this point I was already desensitized to that before the opening credits started rolling. Oh, you want to know about the Dinobots, don't you? Well, they're in the movie. That's about it. I think they existed only for the image of Optimus Prime riding a giant metal dinosaur and nothing else. They are never named, they never speak, and serve no role in the film that couldn't have been filled by the existing Autobots themselves. Optimus tames Dinobot leader Grimlock (I know he's named Grimlock only because I watched the cartoon) and rides him into battle, then releases what is essentially a wild animal that breathes fire into the forests of China with no thought as to the negative consequences of such an act. That's it.

The movie was far from perfect. No Michael Bay Transformers film will ever be. It has much of the Michael Bay cliches, stereotypes, and overall faults in it. But at least there was some attempt to make it stand out from its predecessors, as well as the franchise as a whole. The Autobot-Decepticon War is over and the military is no longer a heroic force for good. Instead, it appears that further sequels will go deeper into the Transformers mythology as Optimus Prime leaves Earth to hunt down Lockdown's employers, the creators of the Cybertronians themselves.

I can only wonder if Bay will give us the planet-eating god, Unicron. The amount of explosions necessary might be too much even for him.

Well, I think I'm off now to find myself a copy of War for Cybertron for my Xbox 360. Time to transform and roll out! 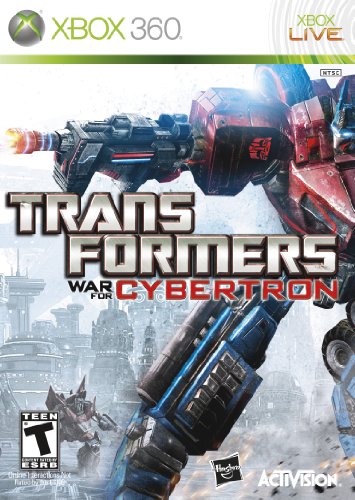 Transformers: War for Cybertron - Xbox 360 Amazon Price: $40.21 Buy Now(price as of Aug 19, 2016)
I know none of you are actually ever going to buy the Michael Bay films, but this game has gotten rave reviews and I'm planning on getting it (and its sequel) myself. It's set in the universe of the original cartoon, rather than the movies.
Next >> Movie Review: The Girl on the Train